Dartmouth Physics Gets a ‘Ride’ on NASA Rocket

On the morning of Jan. 4, Professor James LaBelle tracked a NASA rocket as it roared into the sky above Norway’s Andøya Space Center to an altitude of nearly 500 miles. As the mission’s principal investigator, LaBelle watched as the CAPER-2 sounding, or measurement-collecting, rocket sent down new data on electric fields and charged particles in Earth’s environment.

This was the fifth rocket to be launched as part of an international research project undertaken by the United States, Norway, Canada, and Japan.

“NASA handles the rockets. We just get a ride,” says LaBelle, the Lois L. Rodgers Professor of Physics and Astronomy.

“We are investigating the physics of wave-particle interactions. Charged particles such as electrons are surfing on electromagnetic waves—waves that can accelerate these particles. Nature has mastered the art of making particle accelerators in space and we are looking at how she does it.”

LaBelle says scientists are gaining valuable knowledge through these investigations. An understanding of how electron beams and accelerated particles behave in space is especially relevant, since they can damage spacecraft.

“Our goal is the prediction of weather in space the way we predict it here in the atmosphere,” says LaBelle. “At this point, we can’t predict the weather up there anywhere near as well as we can predict it here, but this is what we are striving for.”

He says that with the increasing dependence on space technologies such as GPS and satellite communications, the cost of launching payloads into space—about $10,000 a pound—is justified.

Payloads in space physics are not typically recovered, he says. All the data collected are transmitted immediately to the ground through radio contact, beginning the moment the rocket launches. 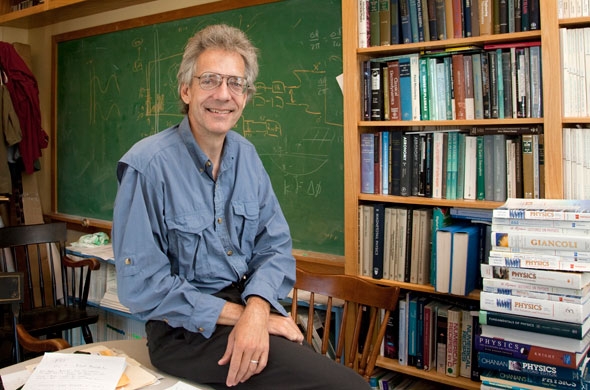 “NASA handles the rockets. We just get a ride,” says LaBelle, the Lois L. Rodgers Professor of Physics and Astronomy. (Photo by Joseph Mehling)