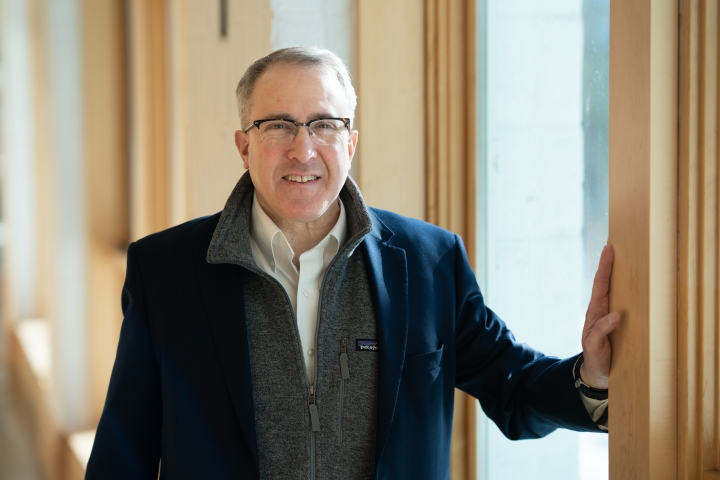 Thomas Burack ’82, former commissioner of the New Hampshire Department of Environmental Services and a student of the orations of Daniel Webster, Class of 1801, is the 2019 Perkins Bass Distinguished Visitor. (Photo by Eli Burakian ’00)
1/29/2019
Body

This year’s Perkins Bass Distinguished Visitor is a two-for-one deal with Thomas Burack ’82, former Commissioner of the New Hampshire Department of Environmental Services, and Daniel Webster, Class of 1801, senator, statesman, and legendary orator.

During his year as a Perkins Bass Distinguished Visitor through the Nelson A. Rockefeller Center for Public Policy, Burack, an attorney with the law firm of Sheehan Phinney Bass & Green in Manchester, N.H., will visit public policy classes and take part in a public event at the Arthur L. Irving Institute for Energy and Society, sharing insights from a career in environmental and energy law that has included service in all three branches of government as well as his current role as a lawyer and consultant in the private sector.

He will also share his longtime fascination with the life and works of Daniel Webster by donning period costume and performing Webster’s peroration, or the final part of his closing argument, in the Dartmouth College case, the landmark 1819 U.S. Supreme Court Case in which Webster convinced the Justices that the College should remain a private institution and not become a state university. Burack’s personification of Webster is scheduled for the closing ceremony of the Dartmouth College Case Symposium in Hanover on March 2—part of the College’s yearlong 250th anniversary celebration.

Being asked to return to Dartmouth to share his passion for public policy work, dramatic oration, and storytelling is a wonderful opportunity, Burack says.

“I’m absolutely thrilled to be selected as a Perkins Bass Distinguished Visitor. It is a tremendous honor to have the opportunity to spend time with Dartmouth’s extraordinary students, faculty, and staff,” he says. “I will share what I can, but I suspect there will be much learning on my end as well.”

Burack noted that former New Hampshire Gov. John Lynch, who was the first Perkins Bass Visitor, in 2013, and who now teaches at the Tuck School of Business, was the person who recruited him into the executive branch of state government. In addition, shortly after graduating from Dartmouth, Burack served as a legislative assistant to then-U.S. Sen. Gordon Humphrey, and he later served as a law clerk to the then-Associate Justice David Souter of the Supreme Court of New Hampshire.

Among the events the Rockefeller Center is planning with Burack are a February visit to the public policy class of Ronald Shaiko, senior fellow and associate director of curricular and research programs at the Rockefeller Center, and a spring forum at the Irving Institute. In Shaiko’s class, Burack will lecture on the federal-state relationship and collaborative federalism.

The Irving event is still in the planning stages but Burack, who during his 10 years as Commissioner of New Hampshire’s environmental agency helped lead regional efforts to reduce greenhouse gas emissions from the electric power sector, says he’s working on an event for a broad cross-section of community members to help promote deeper understanding of the steps that can be taken now to move toward an environmentally sustainable energy future.

On Jan. 22, Burack previewed his performance of Webster’s peroration for the students in the undergraduate course “Daniel Webster and the Dartmouth College Case.” The class, taught by Donald Pease, the Geisel Third Century Professor in the Humanities, Professor of History Robert Bonner, and Russell Muirhead, the Robert Clements Professor of Democracy and Politics, is one of the course offerings under the umbrella of the College’s 250th celebration.

After the class, Burack said that his interest in dramatic oration and storytelling goes back to his childhood in New Hampshire, and was ignited during his Dartmouth undergraduate days when, through the Dartmouth Outing Club, he was introduced to the Jean Baptiste stories of C. Ross McKenney, the DOC woodcraft adviser from 1937 to 1961. Burack began performing the humorous monologues of Jean Baptiste, a colorful French-Canadian woodsman character, for DOC events and other gatherings.

Early in his legal career, Burack was recruited by the New Hampshire Humanities Council to take part in the council’s Chautauqua-style programs—recreations of the late 19th- and early 20th-century speaking circuit made famous by Mark Twain. One of the programs Burack performed was a dramatic recitation of Stephen Vincent Benet’s short story The Devil and Daniel Webster. Burack’s home library includes Webster’s collected papers; he has read half a dozen biographies of Webster and says he’s trying to get to know Webster’s life well enough to be able to portray him in a Chautauqua format.

Burack’s Webster performance for the Dartmouth anniversary, and being tapped as a Perkins Bass Visitor “really was a completely serendipitous confluence of events,” he says. New Hampshire Supreme Court Associate Justice Jim Bassett ’78 asked if Burack would perform the Webster peroration for the Dartmouth College Case Symposium before he was invited by the Rockefeller Center to be the 2019 Perkins Bass Distinguished Visitor.

“Public policy and storytelling have been longstanding passions, so I am thrilled that I am able to share both my vocation and my avocation at Dartmouth during this 250th anniversary celebration,” he says.