The project marks a major step in the institution’s commitment to renewable energy. 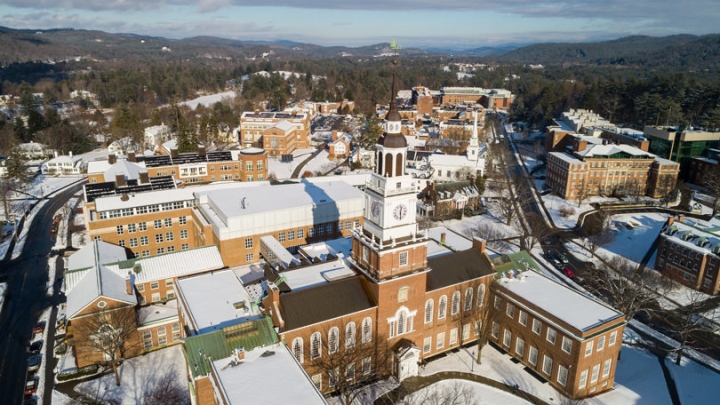 Dartmouth is seeking proposals to build a biomass energy heating facility and transmission system to replace the existing central heating system, marking a major step in the institution’s sustainability commitment to reduce carbon emissions and transition to renewable energy sources by the year 2025.

The new system, estimated to cost more than $200 million, will change how heat is produced and delivered on campus, transitioning from steam heat to hot-water heat, a change that is expected to improve heating efficiency by 20 percent and will mean replacing the existing steam pipes that are in more than 110 buildings on campus.

“With this important initiative, Dartmouth is keeping the promise we made on Earth Day 2017. This work has been eight years in the making, with research and planning from the Sustainability Office, Campus Services, and from faculty, staff, students, and trustees,” says Executive Vice President Rick Mills.

The College is beginning the process of getting the plant built and operating—which includes reviewing design proposals and beginning permitting processes—with the goal of having the new facility operating by late 2025. A site for the new plant is expected to be chosen this spring.

The project will be financed, built, and operated by a private company in partnership with Dartmouth, and will allow the College to stop burning the millions of gallons of No. 6 fuel oil used in the existing heating plant, which is located in the center of campus. Instead, biomass—in this case sustainably sourced waste-wood material from forestry and timber industries—will be burned in the new plant. The materials will be purchased as locally as possible. A review of the availability of wood biomass shows that a sufficient quantity of the material is available in the region and across New England.

When the new facility goes on line, the existing plant, which has been in use in various forms since 1898, will be decommissioned and the land it occupies—approximately one acre—made available for other uses.

In the next few months, College officials will begin review of companies and expect to name a project partner in the summer of 2020. The College has chosen to work with a private company to take advantage of the resources and expertise in the energy industry, allowing the College to focus on its core educational mission. Dartmouth will pay the company to finance, build, and run the plant for 30 years, and will consider contracting with a company in the U.S. or abroad.

The 16 Dartmouth employees who currently work at the heating plant will be offered positions with the private company. The workers will receive pay and benefit packages comparable to what they receive from the College.

The project is part of the April 2017 pledge made by President Philip J. Hanlon ’77 to transition Dartmouth to a low-carbon future by making strategic investments in sustainable energy, waste management, food systems, land use, transportation, and water systems. Progress has been made in a number of these areas and the work is ongoing.

The pledge includes reducing greenhouse gas emissions from 2010 levels by 50 percent by 2025 and by 80 percent by 2050; transitioning the heating system from No. 6 fuel oil to renewable sources by 2025; and establishing a better system to distribute energy across campus, improving efficiency by 20 percent.

The new facility will meet the 20 percent efficiency goal and transition off No. 6 fuel oil, and is expected to reduce greenhouse gas emissions from 2010 levels by about 70 percent, far exceeding the 2025 goal.

“The plan to convert the campus steam system to hot water is an excellent idea that will achieve a 20 percent improvement in efficiency, and a similar-sized decrease in carbon emissions. A transition away from No. 6 fuel oil will also be a great achievement when it happens,” says Andrew Friedland, the Richard and Jane Pearl Professor in Environmental Studies.

With Rosi Kerr ’97, Dartmouth’s director of sustainability, Friedland co-chaired the Sustainability Task Force that President Hanlon appointed in 2016. In 2017, the task force produced a report called “Our Green Future: The Sustainability Road Map for Dartmouth,” which informed Hanlon’s 2017 Earth Day call for Dartmouth to reduce carbon emissions and transition to renewable energy sources, among other goals.

“Dartmouth has been on a good path since we submitted our task force report on Earth Day 2017. Perhaps the most visible sign of commitment and progress is the large number of photovoltaic panels that are visible around campus that weren’t present in 2017,” Friedland says.

There are solar panels on 11 campus buildings. Solar energy currently generates about 2 percent of the College’s electricity.

Designing for the Future

The College’s sustainability goals have officials aspiring to get to a zero-combustion future, hoping to eventually use an energy source to create heat that doesn’t involve burning anything or contributing to greenhouse gas emissions. Engineering analysis indicates that this isn’t achievable now due to Dartmouth’s energy reliability and budgetary requirements.

The new energy plant is designed to serve a 30-year window, after which it is anticipated that technologies such as solar, wind, or geothermal energy will have developed enough to deliver the energy and reliability the College requires at an affordable cost. The new distribution system—transmission lines from the plant to central campus locations, and new piping to be installed in most buildings—will be designed to serve a much longer timeframe—as long as 100 years—and be able to be adapted to work with future technologies.

“This new plant represents a huge step forward for Dartmouth,” says Kerr. “And it meets two important goals of the green future roadmap. It gets us off No. 6 fuel oil and it establishes a more efficient system to distribute energy across campus. This puts us in a very good position to look decades ahead to what types of systems we might be able to use that don’t require combustion.”

The plant will be fitted to also burn liquid biofuel on the coldest of days of the year, when the wood biomass system cannot meet the College’s energy needs. Liquid biofuel can be made from materials such as vegetable and other oils, animal fat, and soybeans.

Moving to biomass and biofuel means the College will stop using some 3.5 million gallons of No. 6 fuel oil annually, down from about 5 million gallons in 2010. The decrease is the result of various efficiencies implemented in the last several years, including in the way air is cooled to provide air-conditioning in campus buildings.

Overall, the new heating plant will be larger than the current facility, with space needed for biomass storage and handling that isn’t needed in the current plant. The boilers in the new plant are expected to be about the same size or smaller than those in the existing plant.

The plant won’t be the first biomass operation in the Upper Valley. Hanover High School and the Richmond Middle School, also in Hanover, both burn biomass to heat their facilities.