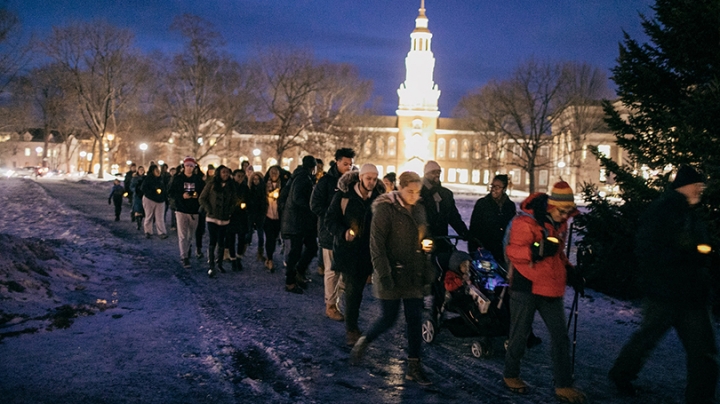 Last year’s MLK celebrants gathered for the traditional candlelight vigil, which will be held again this year. (Photo by Robert Gill)
1/08/2019
Body

“The times that we are in right now require a lot of critical thinking about serious issues,” says Evelynn Ellis, vice president for institutional diversity and equity. “But now more than ever, we also need to be able to laugh.”

Ellis expects a large audience for comedian, author, and video blogger Franchesca Ramsey, who will give the keynote speech for Dartmouth’s annual Martin Luther King Jr. celebration at 7 p.m. Monday, Jan. 21, in Spaulding Auditorium at the Hopkins Center for the Arts.

Host of the award-winning MTV news web series Decoded, Ramsey is also the author of Well, That Escalated Quickly: Memoirs and Mistakes of an Accidental Activist, which The New York Times calls “a sort of manual on social justice, complete with a glossary of terms like ‘ableism’ (discrimination against people with disabilities) and ‘ally’ (someone who defends the rights of marginalized groups to which they do not belong).”

Ellis says Ramsey’s presentation comes at a time when “there appears to be a continuous decline in respectful discourse that is seriously harmful to the nation as a whole. People of color, women, poor people, and immigrants are suffering the pains of the toxic discourse in ways that will require decades of healing and community rebuilding.”

The theme of this year’s commemoration is “Standing at the Threshold.”

“We stand at the threshold between human compassion and total indifference,” says Ellis. “May our programs inspire you to choose compassion.”

New to the MLK commemoration this year is the Towards Freedom Oratorical contest, open to all currently enrolled Dartmouth students. Contestants read or watched the speech King gave when he visited Dartmouth in 1962 and wrote reflective essays, songs, or monologues about its meaning and relevance. Three winners have been selected to give presentations and participate afterwards in a panel discussion at 6 p.m. Monday, Feb. 4 in Dartmouth 105, the same room where King spoke in 1962. This event is part of the College’s 250th Celebration.

The awards will be presented at 7 p.m., followed by a panel discussion, on Thursday, Jan. 31, in Filene Auditorium. Read more about the awards and awardees.

Dartmouth staff and faculty will gather for breakfast in the Hanover Inn Grand Ballroom at 8:30 a.m. Monday, Jan. 21. Seating is limited; registration is required and closes Jan. 14. The featured speaker will be Assistant Professor of Religion and African and African American Studies Vaughn Booker. At 5 p.m. that evening, a candlelight vigil will begin at Cutter-Shabazz Hall, sponsored by the Theta Zeta chapter of Alpha Phi Alpha fraternity.

Other highlights of the month-long celebration include a children’s puppet show, weekly sing-ins, and interfaith worship services. Alicia Ely Yamin will give the keynote address for the Geisel School of Medicine celebration event, “Sexual Violence: Survival, Stereotypes, and Social Change,” at 2 p.m. Saturday, Jan. 19.

For a full listing of Martin Luther King Jr. events, visit the website.

MLK Speaker Takes Aim at ‘A Crisis of Lovelessness’ 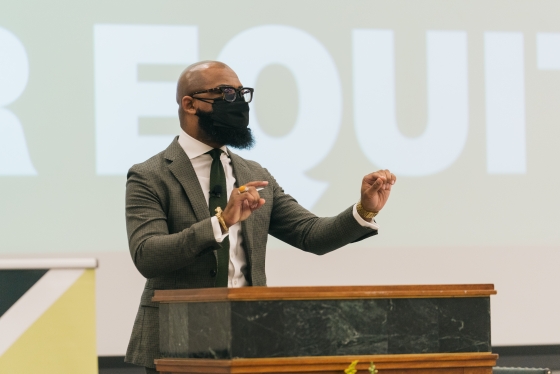