Students Get Firsthand View of the Economies of Chile, Argentina

On a trip to South America, a class meets with finance ministers, CEOs, economists. 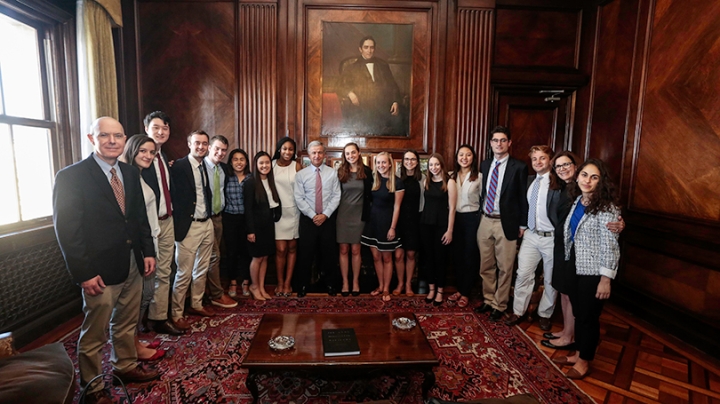 The students in “Macroeconomic Policy and Reform in Chile and Argentina” dove into the reality of classroom theories on a winter-interim trip to South America, visiting current and former ministers of finance, top business executives, leading economists, community organizers, and students in the two countries.

Kira Koehler ’21 says the process of taking the research they started over the fall term to the countries they studied was a vital part of the learning experience.

“It was really incredible to be on the ground. I definitely don’t think I would have gotten anywhere near the knowledge I did if I didn’t actually go to these countries,” she says.

Douglas Irwin, the John French Professor in Economics, and economist and Senior Lecturer Marjorie Rose, who are a married couple, taught the economics-immersion class this year. Past economics immersion classes have traveled to Poland, Peru, and China. Irwin’s and Rose’s class was focused on how government policy decisions played out in the two countries.

“You can teach in a classroom here and they get a certain perspective, but to really see the impact of policies firsthand, to see the differences and to meet with the people who are living in those economies and hear their perspective, is really eye-opening for all the students,” Rose says.

A group of 16 students studied the two economies over fall term, then spent two weeks of the interim break traveling. They spent a week in Chile and a week in Argentina, returning to the U.S. in early December.

“We were comparing neighboring countries: Argentina, on the decline for a century, and Chile, an up-and-comer. The goal of the class was to show what a difference good economic policy makes,” Irwin says.

The trip involved two parts: discussions with policy-makers and experts on the economic challenges facing both countries, and the team research projects. Student groups researched specific areas at Dartmouth and then arranged their own interviews and visits with policymakers, professors, the business community, representative of civil society, and students in each country to explore these topics in depth, Rose says.  The student teams made final presentations to faculty at the Center for Macroeconomic Study in Argentina.

Koehler, who studied pension systems in the two countries, and her group met with pension advocacy groups and had a two-hour meeting with former Minister of Labor José Piñera, architect of the privatization of the country’s pension system and brother of Chilean President Sebastian Piñera.

“If you just look at this class in general, it really speaks to the dynamic of learning at Dartmouth, the independence that we had with our research and contacting people,“ Koehler says. “We set up phone calls, we had meetings, and then getting to meetings across a city where people only speak Spanish—I think that really is its own form of education.”

Student teams focused on various economic issues—women in the labor force, income inequality, pensions, and entrepreneurship and business development. They met with a number of professionals, including Felipe Larraín Bascuñán, Chile’s minister of finance; Mariano Otero, CEO of Uber in Chile and Argentina; and Sebastian Diaz, CEO of Start-Up Chile, part of the Chilean Economic Development Agency.

Zachary Port ’20 was part of the group studying entrepreneurship and business development. He says the trip helped him push beyond his basic understanding of Chile as a stable, steadily growing economy in contrast to the volatile, unstable Argentine economy.

“We thought it must be better to be Chile,” Port says. “Well, it turns out for entrepreneurship, Argentina has an advantage because the Chilean culture is one of stability and risk aversion—failure is frowned upon. Whereas in Argentina, even the government fails, and every so often banks fail. There is always this unease and always this risk, so they’re risk-loving, or at least risk-tolerant, which fuels the entrepreneurial spirit. That’s one interesting nuance that we saw.”

Port says the class embodied the learning model that drew him to Dartmouth.

“We got to learn and travel alongside two unbelievable professors,” Port says. “It’s the kind of experience that I couldn’t see myself getting anywhere other than at Dartmouth. It was really special to me and I think to the group as a whole.”

Funding for the immersion project is provided by the economics department and the Political Economy Project.