“The accomplished players in Italy treated us as colleagues,” says Benjamin Lee ’19. 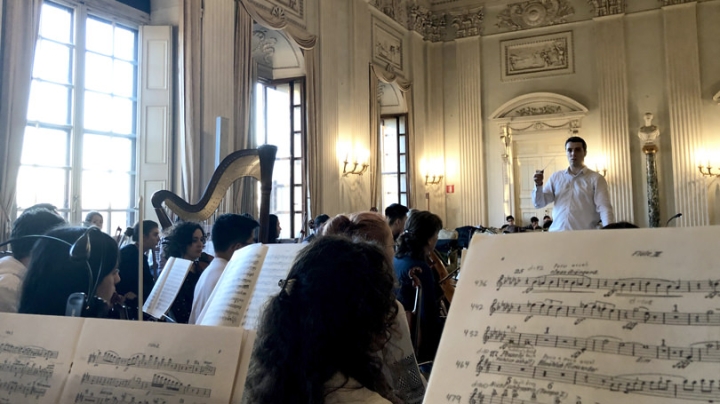 At the Villa Poggio Imperiale, where a 14-year-old Mozart once performed for royalty, 47 members of the Dartmouth Symphony Orchestra began an Italian concert tour unlike any other in DSO history. With the Orchestra Toscana dei Conservatori, whose players come from elite music academies throughout Tuscany, the DSO performed concerts in Florence, Montepulciano, Lucca, and Siena.

The 10-day winterim trip was a homecoming for DSO Music Director Filippo Ciabatti. Born and raised in Florence, Ciabatti studied at the Luigi Boccherini Conservatory in Lucca and the Giacomo Puccini Conservatory in La Spezia before coming to the U.S to earn his doctorate in music from the University of Illinois at Urbana. He began work at Dartmouth in 2016.

“Bringing the DSO to my own country was a great emotional moment for me, as well as an artistic moment,” says Ciabatti. “I really wanted to involve my friends, who are valuable musicians in Italy.”

He also wanted to give Dartmouth students the chance to perform with a large, highly regarded European orchestra.

To build a partnership with Italian conservatories, Ciabatti invited flutist Luciano Tristaino, director of the Conservatory of Siena, to perform in Hanover with the DSO in October 2017. Tristaino spent a week at Dartmouth, giving short performances and master classes and talking with Ciabatti about music that the Italian and American players would find challenging and rewarding to perform together in Tuscany.

They chose one of the most musically demanding works in the orchestral repertoire: Gustav Mahler’s Symphony No. 5.

Violist Benjamin Lee ’19, an economics major from Texas, welcomed the challenge. “It’s quite a difficult piece,” he says, “and well-known in the orchestral community. But it’s quite rare for students to be able to play in an orchestra that can perform it well. That’s what unified us. The accomplished players in Italy treated us as colleagues.”

And Ciabatti’s mother, Lee says, treated the Dartmouth group like family. She owns an agritourism business—a farm that offers lodging and gourmet meals in the hills of Florence. One memorable night, she served a seven-course banquet to the DSO and a group of Hopkins Center for the Arts donors who came along on the tour.

“The cuisine was authentically Tuscan,” says Ciabatti, “including Florentine crepes. Everyone thinks crepes are French, but in fact they were brought to France from Italy by Catherine de Medici.”

Music, too, forges friendship in faraway places, Lee says. “People say it’s a universal language, and they’re right. The biggest benefit outside of the concerts in spectacularly beautiful venues was experiencing different world perspectives. For some of our orchestra members this was the first trip to Europe.”

When not rehearsing or performing, the musicians explored Tuscan cities and villages, and, after late-night concerts, celebrated with their new Italian amici.

“I would like this partnership to grow,” says Ciabatti. “I wanted to show the world that the orchestra at Dartmouth is absolutely world class.” And he succeeded. The audience for the sold-out concert in Siena’s ornate Teatro dei Rinnovati demanded a second encore.

“We gave them a gift from America—Leonard Bernstein’s overture to Voltaire’s operetta Candide,” says Ciabatti. “The recognition that we got in Italy, the high praise we got, is the proof that the work we are doing is exceptional. Let’s know that. Let’s nurture that. Let’s be aware of that, going forward.”

Find a daily diary of the Italy tour by flutist Laura Jeliazkov ’18 here.