Gillibrand ’88 Returns as a Presidential Candidate

The New York senator celebrates the women of Dartmouth during a campaign stop. 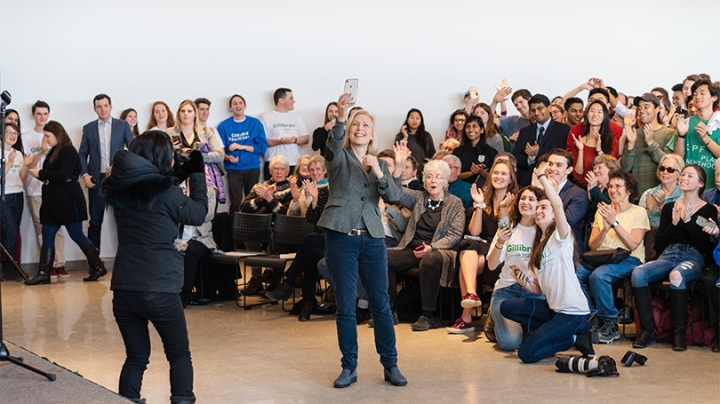 Sen. Kirsten Gillibrand ’88 takes a selfie with the crowd in Alumni Hall during a Feb. 16 presidential campaign stop at Dartmouth. (Photo by Eli Burakian ’00)
2/17/2019
Body

The 2020 presidential campaign trail through Hanover brought Democratic candidate Sen. Kirsten Gillibrand ’88 (D-N.Y.) to Alumni Hall on Saturday for a town hall-style event that became a celebration of the women of Dartmouth.

Gillibrand was introduced to the overflow crowd by state Sen. Martha Hennessey ’76 (D-Hanover), who proudly proclaimed her membership in the College’s first coeducational class, and U.S. Rep. Ann Kuster ’78 (D-N.H.), who drew cheers with her “raise-the-roof” move from the State of the Union address. Kuster said she first met Gillibrand at a Women of Dartmouth event, and was thrilled to be introducing her as a candidate for president of the United States.

“So here it is, the Dartmouth sisterhood. Welcome. It’s an amazing opportunity to be here. I’m very much in tears,” Gillibrand said to the room of 450 students, area residents, and members of the national and local media, with more watching on a monitor outside. She kept the cheers going as she snapped selfies with the crowd.

The New York senator is the second declared 2020 presidential candidate to visit the College, after Rep. John Delaney, a Maryland Democrat, who was here in January. Washington Democratic Gov. Jay Inslee, who is still exploring a run, met with College Democrats two weeks ago, and New Jersey Sen. Cory Booker, who declared on Feb. 1, was at Dartmouth campaigning for New Hampshire Democrats in the midterms, before he officially announced.

Speaking into a hand-held mic as she engaged with the crowd, Gillibrand recognized another well-known woman of Dartmouth—Aggie Kurtz, Gillibrand’s squash coach, who Gillbrand said taught her the power of focusing on making the best move in the moment, never giving up, and letting the game take care of itself.

Kurtz, who was hired by President John Kemeny in 1972 to establish a women’s athletics program at the College after the decision to go coeducational, stood on the sidelines of the event beside Gillibrand’s husband, Jonathan, and 10-year-old son, Henry. Kurtz said she has proudly followed Gillibrand’s career in public office.

Gillibrand said the tenacity that Kurtz and others instilled in her enabled her to overcome many obstacles, including winning her first U.S. House seat in a very red district of upstate New York. It was a race that even her campaign advisers told her she couldn’t win because the district had “more cows than Democrats,” she said, highlighting what she called her ability to appeal across the political spectrum.

In the 2018 senate reelection race, “I won back a lot of the Trump counties that Hillary lost. I do well in our red and purple districts,” Gillibrand said. “And the way you do it is you start by listening. You understand what their challenges are.”

In response to questions from the audience, Gillibrand said climate change is “one of the most urgent crises facing humanity,” and she called the Green New Deal, proposed by U.S. Rep. Alexandria Ocasio-Cortez, (D-N.Y.) and Sen. Edward Markey (D-Mass), “an excellent start.” 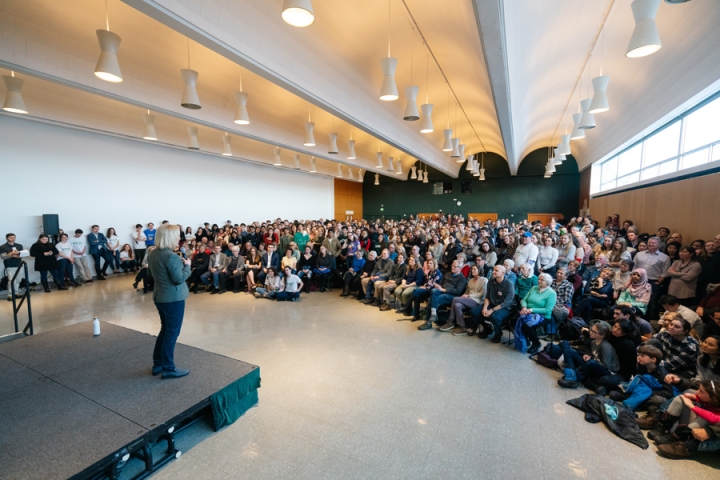 Sen. Kirsten Gillibrand ’88 spoke to an overflow crowd in Alumni Hall during her recent campaign stop. (Photo by Eli Burakian ’00)

Asked if she would support Medicare for all, Gillibrand replied, “Sure will,” pointing to her work writing the language to phase in the public option in Sen. Bernie Sanders’ (I-Vt.) Medicare-for-all bill. Also in response to questions, Gillibrand called for universal background checks for gun sales, comprehensive immigration reform, and an end to the “outrageous” policy of family separations for refugees and immigrants at the southern border.

Allison Tannenbaum ’22 said after the event that she liked Gillibrand’s strategy for tackling climate change by incentivizing the creation of renewable energy and penalizing polluters, and she found the candidate inspiring. “I see her as a role model,” said Tannenbaum, a public policy major. “I’ve never seen a woman so well put together and so inspiring and compassionate and not afraid to show that. It was just amazing.”

Lining up before the doors opened, Lili Stern ’22 and Olivia Nadworny ’22, both said the chance at Dartmouth to meet and talk to a wide range of presidential candidates in the run-up to New Hampshire’s first-in-the-nation primary (a year from now) is extraordinary. Four years ago, in the open race for the White House, a number of GOP and Democratic hopefuls made stops in Hanover.

“What better place to be during a presidential election. To be able to experience that face-to-face with a potential future president of the United States is just an unparalleled opportunity,” Stern said.

“I saw Cory Booker when he was here and met Jay Inslee. It’s really exciting to have all these really big-name candidates come here and engage with Dartmouth students one-on-one,” said Nadworny.

After her remarks, Gillibrand lingered in the Hall to greet everyone who wanted to meet her. Nadworny and Stern took a moment to chat and take selfies with the candidate. Afterwards, they joined her in at a meeting with about 20 College Democrats.