The 2019 honorees are activists in education, community service, medicine, and writing. 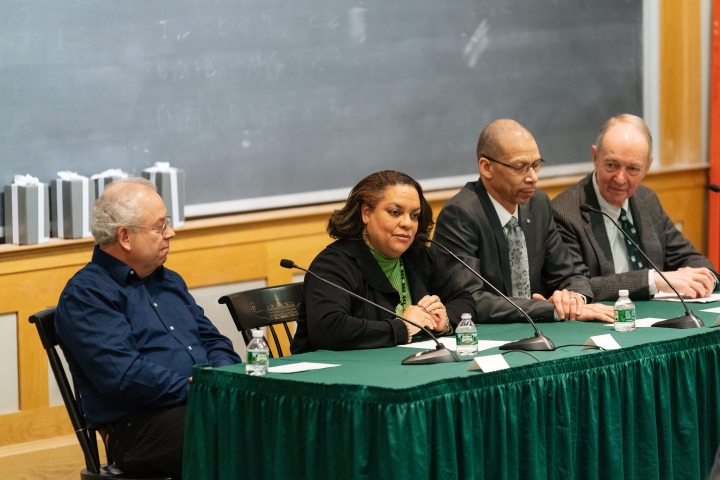 “The time is always ripe to do right,” Martin Luther King Jr. wrote in his 1963 “Letter from Birmingham Jail.” On Jan. 31, in Filene Auditorium, Dartmouth presented four Martin Luther King social justice awards at its annual “Conversations with Changemakers” ceremony.

Co-sponsored by the Martin Luther King Jr. celebration committee, the Office of Institutional Diversity & Equity, the William Jewett Tucker Center, the Center for Social Impact, and the Geisel School of Medicine, the awards recognize members of the Dartmouth community who have contributed significantly to peace, civil rights, education, public health, environmental justice, or social justice.

In her opening remarks, Evelynn Ellis, vice president for institutional diversity and equity, shared a personal story about her annual summer pilgrimage to Georgia and Alabama to visit family. This year, she and her daughter joined her sister and brother on a walk across Selma’s infamous Edmund Pettus Bridge (named for the former confederate general and leader of the Alabama Ku Klux Klan), where civil rights freedom marchers were brutally attacked in 1965.

“As I looked down, I could hear police clubs crashing into bodies,” Ellis said. “I could feel the pain of slaves working in the fields. People were wondering why we were crossing the Pettus bridge in 100-degree weather. But we were telling our children our story.”

The panel of honorees told their own stories in answer to Ellis’s question about the roots of their social activism. Duthu said that, as a Dartmouth student, he had seriously considered entering the Catholic priesthood, emulating a courageous priest in his home state of Louisiana who fought discrimination against Native Americans. A member of the United Houma Nation, Duthu decided, instead, to work toward social justice by earning a law degree and becoming a teacher and scholar.

“The fire within me, lit by my family, is to live out the gospel of love. We’re going to fall apart as social beings if we haven’t learned and practiced the way to love,” Duthu said.

Michelle Duster said her path to social justice involved leaving a lucrative career in advertising for more independent writing, teaching, and activism aimed at combatting racial stereotypes. “I think it’s dangerous to have images that are inaccurate,” she said. “It impacts policy and it impacts a lot of decisions.” Among many projects, Duster has been raising funds for a Chicago monument to her great grandmother, the pioneering African-American journalist Ida B. Wells.

Ray Blackwell, the son of a tobacco farmer, got an early boost from A Better Chance, a program helping low-income, underrepresented youth achieve academic success. He explained why, at the pinnacle of his medical career, he is now pursuing a law degree. “I know my family thinks I do too much, but I’m not sure I’ve done enough yet. You have to have the courage to step up and do what you can, and you will make a difference,” he said.

To help students follow that advice, Karl Holtzschue ’59 and Michael Stern ’59 co-founded Dartmouth Partners in Community Service, which since 1994 has helped more than 700 Dartmouth undergraduates embark on alumni-mentored internships across the United States. During the panel discussion, Holtzschue ’59 said “We’ve spent almost 25 years building DPCS, and we’re not finished.”

Read more about the 2019 awards and awardees.