Students Get a Firsthand View of Foreign Policy Work in Qatar

The Dickey Center’s War and Peace Fellows meet with policy leaders in the Gulf state. 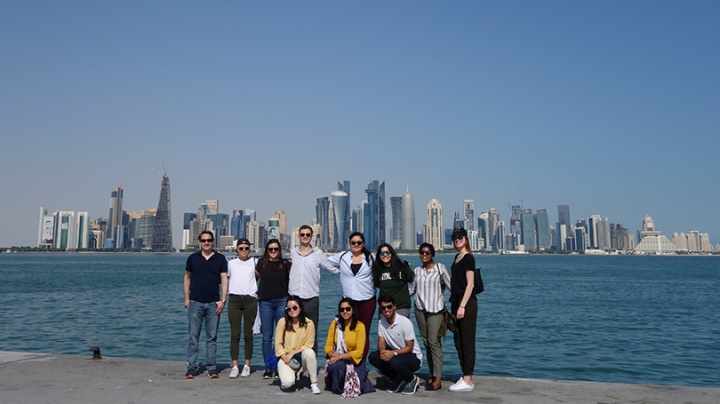 The students of the War and Peace Fellows stand on the Persian Gulf across the harbor from the Qatari capital of Doha. (Photo by Benjamin Valentino)
2/06/2019
Body

Students in the War and Peace Fellows program traveled to Qatar during winter break, attending the Doha Forum, a high-level international affairs summit, and meeting with U.S. and Qatari diplomats in the Persian Gulf state.

“Qatar has played an outsized role in global affairs for some time now—in part because of its wealth and in part because of its active diplomacy—and the quality of the participants in the Doha Forum is a sign of that. It’s remarkable to have so many luminaries in one place at one time,” says Daniel Benjamin, the Norman E. McCulloch Jr. Director of the John Sloan Dickey Center for International Understanding, which sponsors the War and Peace Fellows program.

“I’m grateful to the Embassy of Qatar in Washington, D.C., for making this possible. This was the kind of experience that few students anywhere will get,” Benjamin says.

The students also had a chance to talk with top foreign affairs experts, including senior diplomats in the U.S. embassy and then-U.S. Special Presidential Envoy for the Global Coalition to Defeat ISIS Brett McGurk. (McGurk resigned his position later in December following the departure of Defense Secretary James Mattis.)

“Qatar is at the center of an extraordinarily tense situation in the Gulf region now because of the blockade that Saudi Arabia and the UAE are conducting against this tiny country. For the students to meet Qatari and U.S. officials as well as any array of scholars and experts during this trip was a sort of real-time, up-close experience of a major international relations dust-up. We all got a tremendous amount out of it,” says Benjamin.

Sarah Drescher ’20, a government and quantitative social science double major, says she is grateful for the opportunity to visit a part of the world she likely would never see otherwise.

“The group was also fortunate enough to see both the American Embassy in Qatar and the Qatari Ministry of Foreign Affairs. Getting to hear from and interact with high-level foreign policymakers at Dartmouth through the Dickey Center is already a massive privilege, but being able to do so in Qatar was an incredible and unparalleled experience,” she says.

Associate Professor of Government Benjamin Valentino, coordinator of the War and Peace Fellows, says the trip was “a one-of-a-kind opportunity and something that students at very few other institutions would have a chance to do. It was just an extraordinary experience for all of them.”

Debora Han ’20 says the insight and context that Valentino and Benjamin shared with the students before and during the trip were invaluable.

“Their presence with all of us on the trip really made the trip something special and something that I learned a lot from,” she says.