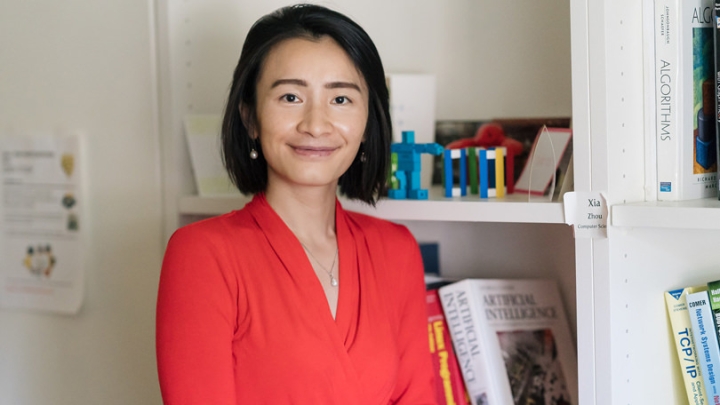 “I am truly honored to join the ranks of other RockStars,” says Associate Professor of Computer Science Xia Zhou. (Photo by Eli Burakian ’00)
3/25/2019
Body

Associate Professor of Computer Science Xia Zhou is a rock star, and now she has an award to prove it.

The Association for Computing Machinery (ACM), the largest educational and scientific computing society in the world, has awarded Zhou the ACM SIGMOBILE’s RockStar Award. SIGMOBILE is the ACM’s organizational division “dedicated to all things mobile.”

The ACM SIGMOBILE’s RockStar award committee selected Zhou “in recognition of her outstanding early-career contributions and impact on our field: for multidisciplinary research examining unconventional wireless spectrum frequencies to build next-generation wireless systems and spearheading the field of ‘visible light sensing,’ which turns the ubiquitous light around us into a powerful medium that integrates data communication and human behavioral sensing. The RockStar Award is our community’s acknowledgement of the depth, impact, and novelty of Xia’s research,” writes Edward Knightly, chair of the award committee.

Professor Dan Rockmore, associate dean for the sciences, says the award is well deserved. “Professor Zhou is an extraordinarily creative computer scientist who is continually looking to push the boundaries of mobile communication,” he says. “This award is a testament to her place in the top rank of the field.”

“I am truly honored to join the ranks of other RockStars,” says Zhou. “I sincerely thank the committee and the SIGMOBILE community for the award. I could not have made it without the continuing support and inspirations from my mentors, colleagues, and students. They are the real stars to me.”

The RockStar award is the latest in a series of accolades Zhou has earned. Her co-authored paper on a new wireless communication technology won the “best video” award at “MobiCom 2016: The 22nd Annual International Conference on Mobile Computing and Networking.” Known as “DarkLight,” this technology employs short, almost imperceptible light pulses to transmit information. The research demonstrated for the first time how visible light could be used to transmit data even when the light appears to be extremely dim or nonexistent.

In 2017, Zhou won a Sloan Research Fellowship in computer science, one of the 126 two-year, $60,000 fellowships to be awarded that year. Nominated by fellow scientists, Sloan fellows are selected on the basis of their independent research accomplishments, creativity, and potential to become leaders in their fields, according to the Alfred P. Sloan Foundation.

Most recently, her work was highlighted in the National Science Foundation-sponsored video “Using Light to Move Wireless Data Faster.”

The RockStar award will be presented during the opening ceremony of ACM MobiCom 2019 meeting in Mexico. Zhou has been invited to speak at the meeting.