The computer scientist earned a Presidential Early Career Award for Scientists and Engineers. 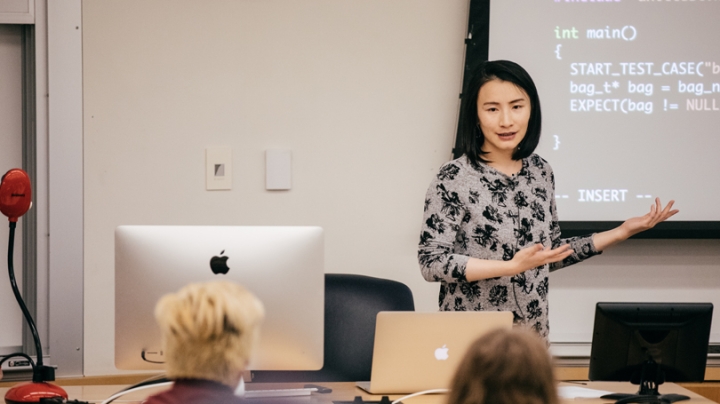 Associate Professor Xia Zhou says she became interested in light as a data medium in 2013, when she joined the Dartmouth faculty. (Photo by Robert Gill)
8/05/2019
Body

Associate Professor of Computer Science Xia Zhou has received a Presidential Early Career Award for Scientists and Engineers (PECASE)—the highest honor the U.S. government confers on researchers at the beginning stages of their careers.

This year she is one of more than 100 scholars from around the country to receive the award, which recognizes both research accomplishments and community outreach and education efforts.

“It’s a very high honor,” says Zhou, who traveled to Washington, D.C., last week for the award ceremony. “I appreciate the recognition of my research and outreach activities.”

A member of the Dartmouth Networking and Ubiquitous Systems (DartNets) Lab, Zhou studies mobile systems and wireless networking, with a focus on how light can be used as a medium for data communication and behavioral sensing.

“In terms of communication, the idea is to increase wireless capacity to support the increasing number of wireless devices and user demand on wireless traffic,” she says. “Light is adding much more bandwidth for communications than the radio spectrum, and if we can make it work with surrounding luminaries, we are actually reusing the illumination energy for data communications. It’s much more energy efficient. And as LED technology advances, they will enable faster communication. I see the possibility of having the lights around us as wireless transmitters talking to all our devices.”

She is also studying how small, cheap, low-powered light sensors could be used in applications from augmented-reality gaming to health care.

Zhou says she became interested in light as a data medium in 2013, when she joined the Dartmouth faculty as a newly minted PhD.

“I was looking to do something very different from my PhD,” she says—and found it when she heard a presentation on the future of wireless communication and the possible uses of light.

“I was fascinated. The bandwidth of the light spectrum is 10,000 times wider than the total radio spectrum, so the promise is huge,” she says. “There were so many unsolved challenges, and at the time, very few people were working on them. So I decided to work on that.”

Zhou’s work has garnered a 2017 Sloan Research Fellowship in computer science and the Association for Computing Machinery (ACM) SIGMOBILE’s RockStar Award, and has been featured by the National Science Foundation in social media campaigns. Among her outreach efforts, she has participated in “Hour of Code” events with elementary school students at Hanover’s Ray School and gave the keynote address at the New Hampshire Tech Alliance’s 2019 TechWomen|TechGirls initiative annual awards luncheon. She also serves as faculty adviser to the student organization Women in Computer Science.

The PECASE award “is setting a high bar for all the work I do in the future, not only in research but also in outreach,” she says.

Zhou says she’s grateful for the support she’s received from her colleagues in the Department of Computer Science. “They are my inspirations and my mentors, and some of them are my very good friends. Especially for junior faculty, having such a supportive and nurturing environment is so essential. Without my colleagues I wouldn’t be here today.”

She finds Dartmouth students to be “super sharp and independent. If you give them a topic, even if they don’t have much background, they are motivated and driven to do a good job.”

Of teaching undergraduates, she says, “What I like is being able to see students improve over time. Students come back and tell me, ‘What you said in class inspired the decisions I made later on.’ I don’t always realize it at the time, but what I teach in class can have a big influence.”