A Course on Daniel Webster, Class of 1801

Students in the sestercentennial course studied Dartmouth’s most famous alumnus. 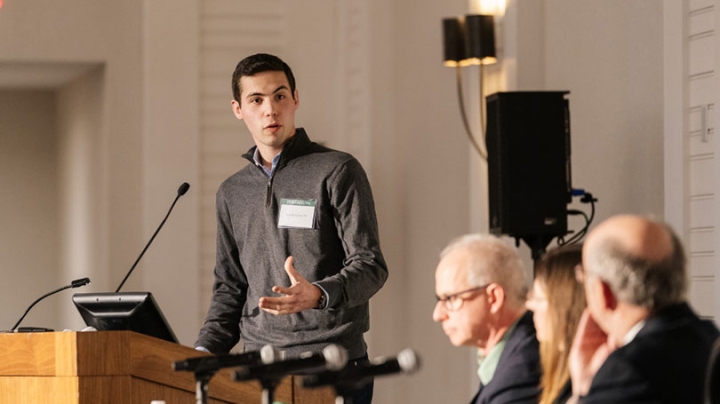 Josh Kauderer ’19 presents his paper on Daniel Webster to a panel of alumni legal scholars at the Dartmouth College Case Symposium. (Photo by Eli Burakian ’00)
3/27/2019
Body

“Somewhere between the Hudson River and the Susquehanna River, we stopped being a class and started being a team,” Russell Muirhead, the Clements Professor of Democracy and Politics, tells the students assembled in a Kemeny lecture hall on a Tuesday in early February.

The 35 students in the class, “Daniel Webster and the Dartmouth College Case,” have just returned from a three-day bus trip to Washington, D.C., with their three professors: Muirhead, Robert Bonner, the Kathe Tappe Vernon Professor in Biograph, and Donald Pease, the Ted and Helen Geisel Third Century Professor in the Humanities.

The interdisciplinary course is a deep dive into American history, rhetoric, and law through the lens of the 200-year-old case. It’s one of several special courses being offered in 2019 as part of the College’s 250th anniversary celebration.

“It’s one of the most remarkable classes I’ve ever taught,” Pease says. “I’ve never been as aware of the differences in the internalized disciplinary assumptions of a government professor, a historian, and a professor of English. This allows the students to become conscious of the need for an interdisciplinary response to complex matters.”

“I never thought I would be sitting in the Supreme Court experiencing the highest level you can get in the judicial framework of America,” says Matt Shearin ’19, a history major from San Diego. “It really allowed me to appreciate what Dartmouth has done for me.”

Altish Yousaf ’20, a double major in government and economics modified with women’s, gender, and sexuality studies, agrees. “To actually see the reenactment at the Supreme Court was amazing. I don’t know when I’ll ever get the opportunity to be in the same place as so many people from within the American law community,” she says.

Back in Hanover, Muirhead debriefs the trip with the class. “I thought it was a majestic occasion. It was really an event of dignity—it brought dignity to Webster, to Dartmouth, to the practice of law, and to the Supreme Court,” he says.

He then introduces a visitor to the class: Geoffrey Kirsch ’09, a graduate student in English at Harvard who recently published a paper on Webster and another major 19th-century American figure, transcendentalist philosopher Ralph Waldo Emerson, who has a young man was inspired by Webster’s soaring and idealistic rhetoric in now-famous speeches at Bunker Hill and Plymouth Rock.

Kirsch—who studied with Pease as an undergraduate—is here to share his thoughts on how Emerson became disillusioned with the statesman when then-Senator Webster cut a deal on the Fugitive Slave Act, compromising his antislavery principles in what turned out to be a futile attempt to hold the Union together.

As the discussion turns to transcendentalism and the nature of the self, Bonner interjects: “Can I make one intervention here, real quick? Could I invite Professor Pease to say a few words on what it’s like to have your former student come back?”

“You don’t know what it means to teach until you know the sheer joy of seeing a former student do what Geoffrey’s been doing,” Pease says.

The course meets twice a week, and has featured other guests, including a visit from Thomas Burack ’82, this year’s Perkins Bass Distinguished Visitor at the Nelson A. Rockefeller Center for Public Policy, who performed a dramatic recitation of Webster’s closing argument in the Dartmouth College Case. On Tuesdays, the faculty take turns lecturing and modeling academic debate for students. On Thursdays, students lead, with groups discussing written responses to assignments.

Culmination of the Course

The course culminates with a public symposium held in March commemorating the 200th anniversary of the case, which featured, among other events, Katyal and Garre giving an encore performance—and students in the Daniel Webster course presenting their final papers to a panel of alumni legal scholars.

In his presentation, Josh Kauderer ’19 follows up on the discussion of today’s class, arguing that Webster’s legacy, which Emerson had repudiated after his compromise on slavery, was eventually redeemed by Abraham Lincoln, who had internalized the ideal of union that Webster had articulated in the decades before the Civil War.

Another presentation, by Rachel Inman ’19, imagines a Supreme Court decision in the Dartmouth College Case favoring New Hampshire’s right to nullify Dartmouth’s charter. Cross’ paper compares Webster to another Dartmouth orator, Samson Occom. Finally, Shearin argues that the state missed an opportunity to show that the charter was already nullified because the College had failed to keep its promise to educate Native students.

Of the opportunity to present, Kauderer says, “It was really exciting. A few days ago I was a little nervous, but our professors practiced with us and have been really accommodating. It was a great learning experience, and fun to hear my classmates give their presentations, too.”

The presenting students agree that the course has been one of the highlights of their Dartmouth experience.

“I didn’t know a lot about Dartmouth history, and thought be a fun thing to learn before I graduate,” says Cross. “I certainly a better understanding of the place where I’ve gone to school.”

“It was a class where you could study the law, but also come at it from angles of history and literature with three of the best professors at Dartmouth,” says Kauderer, who, like Cross, is considering a career in law.

Shearin describes the class as “a culminating experience. It’s helped me understand that I’ve been a part of something unprecedented here in my four years at Dartmouth.”