The earth scientist was invited by the Sustainable Energy and Environment Coalition. 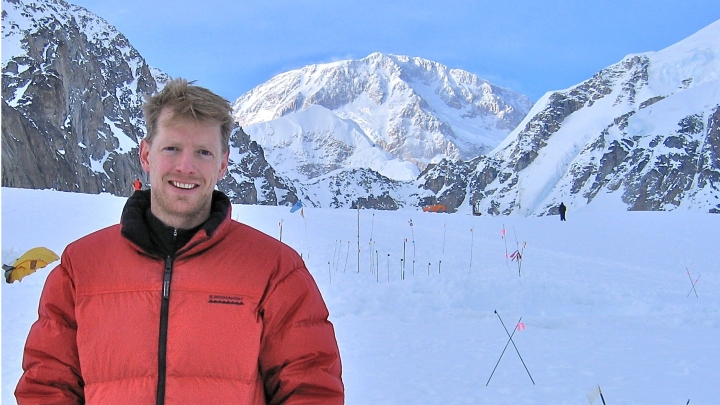 Associate Professor of Earth Sciences Erich Osterberg, in Alaska for a glacial research project, stands atop Mount Hunter with Denali in the background. (Photo by Seth Campbell)
3/03/2019
Body

Osterberg was invited to Washington, D.C., by Rep. Matt Cartwright (D-Pa.), vice-chair of the coalition, to talk about his research indicating that the warming climate caused by accumulating CO2 pollution is causing glaciers in Greenland and Alaska to melt, raising sea levels and combining with extreme storms to affect coastal communities.

“As a scientist, I don’t generally get to interact with people in that world, so it was fascinating to get a little peek behind the policy curtain. I was honored to have the opportunity to bring the members and their staff up to speed on some of the latest scientific information. Perhaps our research can help to nudge the needle towards some national policy on climate change,” says Osterberg.

He spoke at a dinner for members of Congress along with Gina McCarthy, former chief of the EPA in the Obama Administration and head of Harvard’s new Center for Climate, Health and the Global Environment, and Lisa Heinzerling, the Georgetown environmental lawyer who lead authored the winning brief in the Massachusetts v. EPA Supreme Court case that forced the federal agency to regulate greenhouse gasses under the Clean Air Act.

“It was an inspirational group to be around—real leaders on environmental issues from the policy perspective,” Osterberg says.

Among the policy leaders attending the Feb. 26 dinner were House Majority Leader Steny Hoyer (D-Md.), and Rep. Peter Welch (D-Vt.), a member of the SEEC caucus—a group of lawmakers who meet to discuss environmental and energy policy proposals.

There was a strong Dartmouth presence, Osterberg says, including Rep. Sean Casten, Thayer ’98 (D-Ill.), a newly elected member of Congress, Thomas Kiernan ’81, CEO of the American Wind Energy Association, and Abigail Ross Hopper ’93, President and CEO of the Solar Energy Industries Association. Kiernan and Hopper are both members of the Arthur L. Irving Institute for Energy and Society advisory board. Rep. Ann Kuster ’78 (D-N.H.), a member of the SEEC caucus, was not able to attend, but she sent an aide to Osterberg’s climate change briefing for Congressional staff on Feb. 27.

Cartwright told Osterberg he’d decided to invite him to Washington after hearing him on the “One on One at Dartmouth” radio program broadcast on Sirius XM radio.

“He said, ‘I heard this outstanding interview with you on the radio and I’d love to have you down to D.C. to talk to the caucus,’ ” says Osterberg.

After his presentation, Osterberg discussed the possibility of returning to present testimony to congressional committees holding hearings on alternative energy and climate change legislation in the future.

“There seems to be some momentum building behind climate and energy policy in Washington. If we can highlight our research as part of these discussions, it’s good for the policy and good for the science,” he says.