Squishing Giants and Belching Wolves: Designing Sound for ‘Into the Woods’

Will Maresco ’19 is the first student sound designer on a College main stage production. 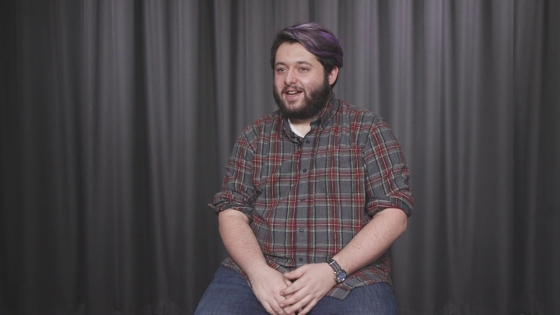 What’s the sound of a fairytale character being trampled by a giant? According to William Maresco ’19: macaroni and cheese.

Maresco came up with the mac and cheese solution in his role as sound designer for the Department of Theater’s winter main stage production of Stephen Sondheim’s musical Into the Woods, which ran over the last weekend of February and the first weekend of March.

“I needed some good squishing sounds, and the thing that works really well for that is macaroni and cheese, especially the instant stuff,” he says. “So I made a pot of mac and cheese, squished it around on a plate with a spatula—and now that is in the show.”

For an undergraduate to serve as a primary designer in a main stage production may be a first, says Associate Professor Laura Edmondson, who chairs the theater department. Typically, sound, lighting, scenic, and costume designers are theater professionals.

“This is the first time I remember that we’ve had a student serve as the sole designer on the main stage, not as an associate or assistant,” Edmondson says. “It’s unprecedented.”

As the production’s sound designer, Maresco was responsible for “every sound that makes it into the audience’s ears, basically,” he says. Musical director Kevin Smith has trained the actors and the musicians in the production’s live orchestra, but it’s Maresco who mixed the sound from their microphones to make sure, for instance, that the words of the songs could be heard over everything else happening on stage.

“It’s important to leave space for those vocals to float on top because, at the end of the day, especially in this musical, a lot of story is told in song,” he says. “Most of my job is restraining myself to stay beneath the singers and to make sure that we are really following the story that they are telling us.”

Into the Woods weaves together the characters and narratives of several popular fairy tales, including Rapunzel, Cinderella, and Jack and the Beanstalk. Maresco’s sound effects were critical to the story, says Dan Kotlowitz, the Leon E. Williams Professor of Theater and the lighting and projection designer for Into the Woods. 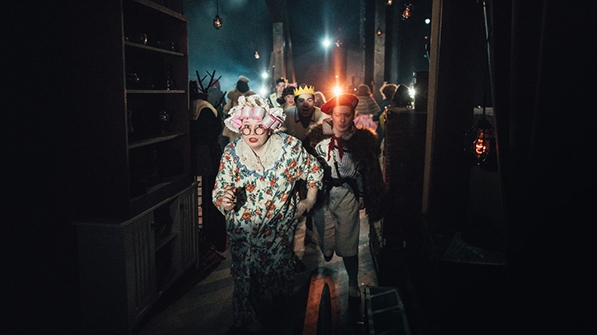 “Will’s sound drives the presence of the giant, who has to stalk around stage crushing people and homes. Will gave these moments the scale and momentum that is essential at this point in the play,” Kotlowitz says.

“He also created a number of sounds that heighten and drive some of the comic moments—a brilliant bit with the wolf in bed having just devoured Little Red Riding Hood, his snore magnified to mythic fairytale heights, accented with an enormous belch. These moments add an aural texture to the storytelling, which Will conceived and implemented with extraordinary grace and humor.”

“Patterns are really important to my sound design,” Maresco says.

For example, to capture the sound of characters walking in the woods—which there’s a lot of in Into the Woods—he looked for something that would replicate the sound of twigs breaking. “I went with cracking nuts, which is a very similar pattern to the way that wood breaks. So a couple times you hear branches cracking, but it’s really walnuts being opened.”

Maresco is a theater major, minoring in engineering and digital arts. His interest in theater began in high school, he says, where he started to learn about lighting design and other technical aspects of theater.

“To me sound design is so interesting because it’s responsible for everything that happens off-stage that is not seen by the audience, but that they can interpret and respond to. You can do surprisingly subtle things with sound design and really affect the mood or atmosphere of a show and an audience.”

He has continued to develop his skills at Dartmouth in classes as well as student and professional productions, including Matilda, produced this fall at Northern Stage, a regional professional theater in White River Junction, Vt.—a show for which he assisted Kotlowitz in lighting and production design.

To do the job, Maresco had to master a new computer program for projections in time for the technical rehearsals. “It was a big, complicated show and there was no time for a long learning curve,” Kotlowitz says. “Will not only learned the program, but added a creative energy to the building of the projections that allowed me to focus on the lighting. In the end his work on the projections was critical to the success of the design.”

But Dartmouth has given him more than technical skills, Maresco says.

“What’s special about the Dartmouth theater department is that the classes are really about the craft of theater. I took lighting design, but that class is not really about light at all—it’s about how to be on a collaborative design team and how to think about a play, as opposed to what color light to use.”

Still, he was a little nervous when Director of Theater Jamie Horton invited him to join the Into the Woods production team.

“I’m accustomed to working with student design teams, but the transition to a professional team was different,” Maresco says. “To be on the same level, at least technically, with my advisers and teachers, was stressful at first. But it’s gone really well.”

The difference between a student production team and a professional one, he says, “is the succinctness that professionals talk with. People know what their role is, what is and isn’t their job to do. So no one’s second-guessing. There’s just a higher level of respect.”