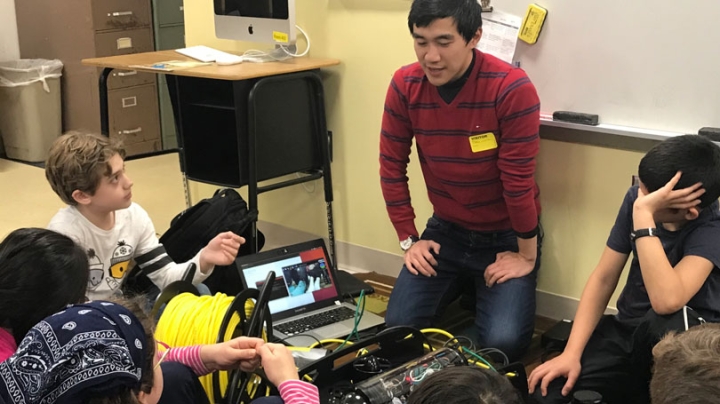 Dartmouth faculty are reaching out to schoolchildren in the community as a way of sharing their knowledge, enthusiasm, and excitement about STEM fields.

Dan Rockmore, associate dean for the sciences, admits that part of his initial motivation was that he had children in school, but he has since become the force behind an initiative to get the word out on STEM—Science, Technology, Engineering, and Math—and he is taking scientists from Dartmouth into the classrooms at Hanover schools.

“There are people even in this community who have never met a scientist,” he says. “Most people don’t think they even know a scientist, so honestly, part of this is showing the kids that the scientist is the person next door, maybe literally. It’s connecting the human element to doing science.”

Rockmore has also been taking kids to the movies. He organized a film series, “STEM@The Nugget,” that began in Oct. 2018, with screenings on four Monday school holidays. The free showings at the Nugget Theater on Main Street drew students from Hanover and surrounding communities. Each movie was followed by a discussion with a Dartmouth professor.

The series began with I, Robot and robotics researcher Alberto Quattrini Li provided the commentary and took questions. The 1997 adaptation of Carl Sagan’s Contact was followed up by physicist Marcelo Gleiser and history of science scholar Richard Kremer was there to discuss Hidden Figures. Earth scientist Marisa Palucis discussed The Martian on Mar. 11.

Rockmore has also embarked on a program at Hanover High School. Seven faculty speakers made presentations in the fall in the “STEM Pathways” series and there will be another seven this spring. Rockmore says that each of the presenters tells students something about how they came to be a professor or a scientist, and a bit about the work they are doing.

Among them is Ina Petkova, an assistant professor of mathematics who joined Dartmouth in 2016. No stranger to the practice of outreach, Petkova taught high-schoolers at a Hampshire College summer program and at a Saturday enrichment program for Columbia University-area 11th- and 12th-graders.

“I taught the fun math that we had missed by just following the standard curriculum,” she says. “I am a strong believer in trying to make science more intuitive, trying to do this in a way that gets the kids to discover whatever is out there on their own. I think exposing students to what is fun, with a mix of what is current and exciting for the adult scientists is what outreach should be.”

For the past four years, Rockmore has been working with students at Hanover’s Bernice A. Ray School (K-5) and the Frances C. Richmond Middle School.  This includes leading a cohort of computer scientists during the annual “Hour of Code” week—an international effort to celebrate the field of computer science.

This year Li, an assistant professor of computer science, was among the participants. He demonstrated robotics to Ray School fourth-graders in January. “It was an exciting experience for the students,” he says. “They were eager to know about the robots I brought, asking many questions about how they work, interacting with them, and controlling them with a joystick. It was a personally rewarding experience through which I could share my passion about robotics and get them interested in the field, and more interested in STEM overall.”

Rockmore adds that it is not just teaching the students science. “The truth is I am betting they don’t know what a mathematician does,” he says. “They don’t know all the things that a computer scientist or a chemist or a biologist or an earth scientist does. So, everyone of us who goes into the schools has a story to tell.”

“Largely, I see it as a broadening of horizons. And showing them the possibilities of pursuing a scientific career—what kinds of fun things they might think about—is important,” says Rockmore. “And when I come back from those presentations at the middle school and the Ray School, I’m in such a good mood. They are just great! They energize me.”

A machine is not a mind-body integrated device. It may mimic one, but in so doing it becomes less than the real thing.

Description
Jared Duker Lichtman ’18, Guarini ’18, has proven a longstanding conjecture relating to prime numbers and primitive sets, sequences in which no number divides any other. The Oxford graduate student began working on the conjecture during his senior year at Dartmouth.
Logo
Image