Cook has served as director of Institutional Diversity and Equity. 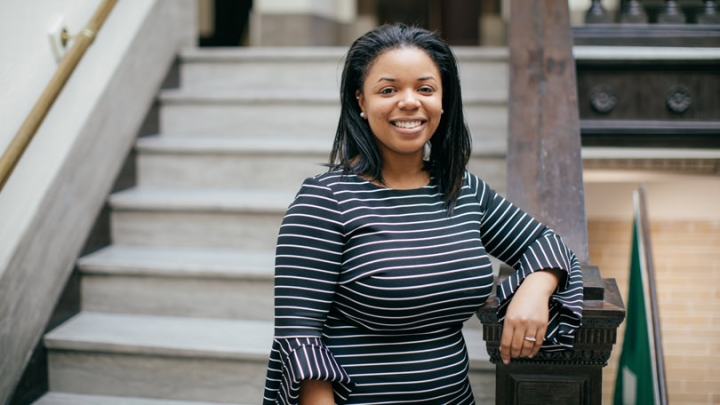 Theodosia Cook, the director of Institutional Diversity and Equity (IDE), has been named director of the Campus Climate and Culture Initiative (C3I).

Launched Jan. 3 by President Philip J. Hanlon ’77, C3I is a comprehensive set of actions aimed at creating a learning environment free from sexual harassment and the abuse of power.

Cook, who will transition to the position full-time this week, has worked at Dartmouth for the past four years, first in Alumni Relations and then as director of IDE, where she managed a range of projects, including assisting in the creation of Dartmouth’s Inclusive Excellence Initiative and developing IDE’s affirmative action plan with support from the Office of Institutional Research.

“I am delighted that Theodosia Cook will manage C3I,” says President Hanlon. “She has shown exceptional leadership in working for inclusivity, diversity, and opportunity for all in the academy and beyond.”

Cook says she’s excited about the opportunity to lead the initiative.

“I think it speaks volumes that this position is in the president’s office. It underscores the importance of this work and the commitment the institution has made,” Cook says.

“There are amazing people at this institution who are doing great work, but we are at times siloed. I hope through C3I we can work together, face our issues honestly, and share with one another solutions to make us better. This starts internally, coming together as one Dartmouth, and, if we are successful, becoming a model for our peers,” she says.

C3I is made up of new programs as well as a number of initiatives that have been in the works for some time. The project is organized into five categories—campus climate, academic and professional development, recruitment, resources, and mandatory reporting. In announcing C3I’s launch, Hanlon noted that it is the third pillar, along with Moving Dartmouth Forward and Inclusive Excellence, of a set of initiatives established to create a welcoming, inclusive, and equitable environment for all students, faculty, and staff.

Cook came to Dartmouth from the Prince George’s County (Md.) Public Schools, where, as a professional development lead teacher, she organized workshops geared toward common core and diversity and inclusion for the district. She was a board member of the Posse Foundation’s college scholarship program for underserved communities, and took part in the decision to extend the program to veterans. She is also a consultant to the Lebanon (N.H.) School District on the development of a diversity and inclusion plan, and has consulted for the Hartford, Vt., Coalition on Racial Inequality, offering diversity training to public officials and the chief of police in Hartford.

Cook earned a master’s degree in education leadership from Columbia University and has a bachelor’s degree from Sewanee: The University of the South, where she was a Posse scholar. Cook lives in Quechee, Vt., with her husband and 15-month-old daughter.

In the three months since Dartmouth announced the creation of C3I, significant progress has been made in the implementation of the programs and actions aimed at creating a learning environment free from sexual harassment and the abuse of power.