After the Fire, a 21st-Century Notre Dame

Art historian Nicola Camerlenghi on what comes next for Notre Dame. 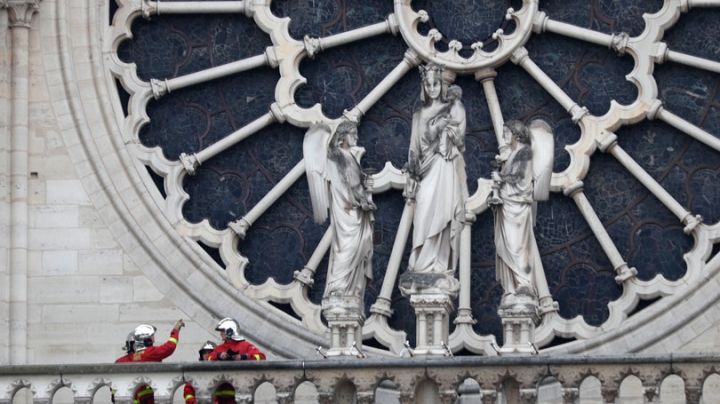 Firefighters look at Notre Dame’s rose windows, which were protected from Monday’s fire by the cathedral’s stone vaulting, which architectural historian Nicola Camerlenghi—an expert on medieval churches—says “did exactly what it was supposed to do.” (AP Photo/Thibault Camus)
4/18/2019
Body

After Monday’s fire at the Cathedral of Notre Dame in Paris, Dartmouth News reached out to Assistant Professor of Art History Nicola Camerlenghi, an expert in early Christian and medieval architecture, to help us understand how the Gothic church fared during the blaze—and what may come next. Camerlenghi is the author of St. Paul’s Outside the Walls: A Roman Basilica from Antiquity to the Modern Era, and a co-principal investigator of the digital humanities project Mapping Rome.

Where were you when you heard the news that Notre Dame was burning?

I was on the computer working and an email came through from a colleague that said, ‘Notre Dame is ablaze.’ At that time it was still just a small fire around the tall pinnacle. It was jarring because it was very high up, so we knew fighting that fire would be a problem, and it was apparent there was a lot of wind. That’s what struck me the most—how fast everything went up in flames. In a matter of two hours, there was no timber left. I connected on Facebook with some colleagues and we had the equivalent of an old-fashioned chat room with people posting images and things we found that we thought could be helpful. It can be hard for journalists to jump in and know what they’re looking at and talking about. We managed to throw together some very specialized stuff to stay ahead of events.

What were you thinking?

We were relieved because we could see flames on the top of the building, which meant the fire was burning on top of the vaults, which strangely is good news. But we were terrified. There were moments when it looked like the two facade towers were going. Inside those towers is a lot of wood, supporting thousands of pounds of bells. Imagine if those bells fell—they would have brought down the towers just from the heat of the inferno of melted bronze coming from below. So that was impressive firefighting.

Are you surprised by how much is still standing?

The end result is close to what we had imagined—the vaults held, except in three spots. The lead roof and wood ceilings collapsed onto the vaults, but that’s exactly what they’re supposed to do. The other good news was that all the stained glass is protected by the vaults. There were photographs in the morning that revealed that these radiant, fantastic windows survived.

Put this fire in the context of other medieval cathedral fires.

The eerie thing is how similar this is to the church that I study, St. Paul’s in Rome, which burned in 1823—I suspect in a very similar way. They were doing repairs on the lead roofing, which was what was going on here. It was July, too hot to work during the day, so a worker was working at night and left a candle burning on the timber trusses of the roof. In the case of St. Paul’s, which is 700 years older than Notre Dame, there were no vaults, only timbers in the roof, so the moment they collapsed you had that fiery inferno at ground level that pulverized the columns and took down the walls. In a matter of hours the entire ceiling was alight, flames rising twice as high as the building. So this was like reliving that, but fortunately nothing at Notre Dame caused as massive a structural damage. St. Paul’s had to be rebuilt from scratch, which was done. It was a worldwide effort, with donations from Baltimore to St. Petersburg. I suspect this will be a worldwide effort, too. 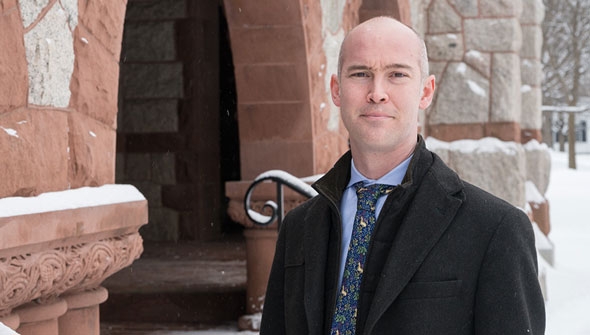 Assistant Professor of Art History Nicola Camerlenghi is an expert in early Christian and medieval architecture. (Photo by Eli Burakian ’00)

In terms of materials, there have been some advancements since the building of Notre Dame. Those were impressive 12th-century beams that burned, made from trees that probably were 300 years older than that. When the cathedral in Reims, France, was air-bombed during World War I, the Rockefellers came in and paid for the restoration of the roof in concrete beams as opposed to timber. Today, rebuilt, you would hardly know, except much of the stained glass was lost. So I would expect that the restoration of Notre Dame will be using new materials that will not be visible from the outside. I think there would be lots of opportunities for new technologies to come into the picture, and in fact something of this scale will probably inspire the technology of restorations to leapfrog in terms of innovations.

Will digital imaging technology like the work you’ve done in Rome help?

I mostly work with buildings that no longer exist, so it’s a different kind of exercise. But The Atlantic just published an article on the work of my late colleague Andrew Tallon, who used a laser scanner to scan the interior of Notre Dame to millimetric precision. That will be priceless, because knowing the previous condition, they can scan again and see where there are deformations. What he has contributed is the ability to restore this building he loved so much. And it suggests broadly that technology can help us in ways that we aren’t always imagining when we first apply it.

Notre Dame was one of the birthplaces of the flying buttress. And in other ways, too, it was a laboratory of ideas. The stone vaulting inside and the flying buttresses outside make it possible to have these soaring spaces that wouldn’t burn, that would be fantastic acoustically, that would be uplifting to the soul. To combine all those things in one single solution is the wonder of Gothic architecture. I think there are some 12th-century builders looking down at what happened this week and thinking, ‘It worked.’ Ultimately the building did exactly what it was supposed to do, with some minor issues of the fallen vaults. The Middle Ages always get such bad press, but in reality, here’s one hell of an innovation. These people knew what they were doing. Sometimes it takes 800 years to make us realize this.

What meaning do you take from this fire?

What this has brought home for me is the sense of buildings as enduring entities, which is something I’ve always argued, but never felt with such an emotional gut response before. Yes, Notre Dame was begun in the 12th century, but it replaced an earlier church and it was heavily restored and embellished in later centuries. And now this fire has made Notre Dame a 21st-century building, too. It has come roaring into our present, and we have an obligation to pick up its legacy and see that it gets everything it needs to continue its existence.