“We are grateful for every gift to The Call to Lead,” said President Philip J. Hanlon ’77. 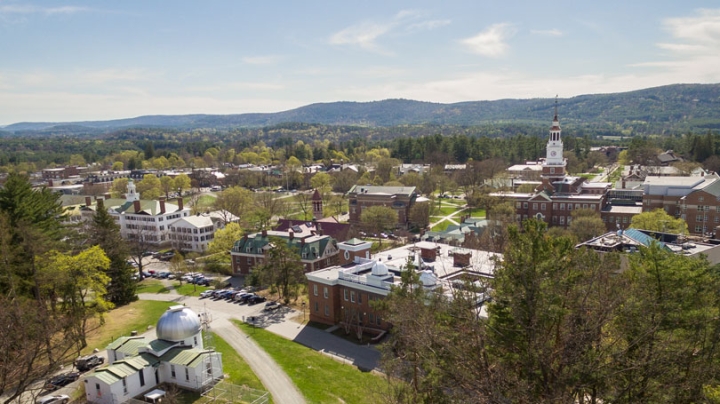 Alumni, parents, and friends have given generously to The Call to Lead: a Campaign for Dartmouth in the last month, reaching the $2 billion mark just 11 months after the campaign’s public launch. The historic fundraising effort aims to raise $3 billion.

“We are grateful for every gift to The Call to Lead,” President Philip J. Hanlon ’77 told the audience in Lincoln Center in New York City on April 2. “All gifts matter, not just the ones you read about. This is not a campaign where a handful of individuals or families determine our destiny. The best things we accomplish at Dartmouth we do as a community.”

Here’s a roundup of campaign achievements announced in April:

On April 18 in Los Angeles, President Hanlon announced gifts to create a groundbreaking professorship in Native American studies and to jumpstart completion of the College’s Arts District.

Also announced at the event is a $15 million commitment from members and friends of the Hopkins Center Advisory Board to kick off fundraising to transform the iconic Hopkins Center for the Arts through a $75 million revitalization.

Read more about the April 18 event in Los Angeles.

At two campaign celebrations earlier this month in Texas, Hanlon announced a series of gifts from alumni and parents that will make the dream of a Dartmouth education possible for dozens of undergraduates annually and prepare generations of global health leaders.

At an April 10 event in Houston, the president announced an anonymous $22 million bequest intention dedicated to financial aid, a top priority of The Call to Lead. In today’s dollars, this planned gift would provide endowed financial aid funding for up to 44 undergraduates every year.

At an April 8 event in Dallas, the president announced gifts from four families, totaling $7 million, to broadly prepare global health professionals and improve the health of people living in vulnerable communities around the world.

Read more about the Texas events.

At the Lincoln Center event, Hanlon recapped the campaign’s progress and said that the results are benefiting all five Dartmouth schools, especially through financial aid, dozens of new professorships, and an array of investments bolstering teaching, research, and residential life.

Major building projects funded by the campaign include the renovation and expansion of the Hood Museum of Art, which re-opened in January, and construction of the new Moosilauke Ravine Lodge, which greeted its first class of students last fall. Dartmouth broke ground this winter on a 160,000-square-foot engineering-computer science building in the west end of campus.

The Call to Lead, which advances a comprehensive strategic vision for Dartmouth, was launched publicly in April 2018 and is scheduled to conclude in 2022.

“We invite each of you to join us in this important work,” Board of Trustees Chair and Campaign Co-Chair Laurel Richie ’81 told the New York crowd. “To find a way that works for you in achieving Dartmouth’s ambition. Because at its core, The Call to Lead is a call to act, to support, to engage, and to serve.”

Read more about the April 2 event. Learn more about The Call to Lead campaign and upcoming celebrations.