The Burning of Notre Dame: A Professor’s Dispatch From Paris 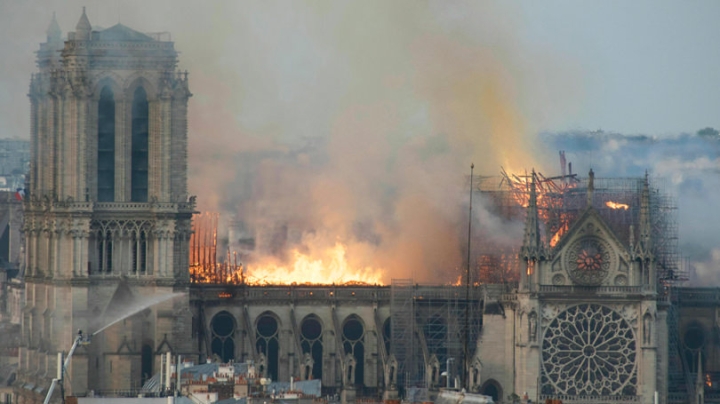 The burning of Notre Dame Cathedral, being mourned worldwide this week, “feels like the collapse of a civilization that makes you painfully aware of the vulnerabilities of our societies and ourselves,” says Lynn Higgins, the Edward Tuck Professor of French.

Higgins is leading Dartmouth’s Foreign Study Program (FSP) in Paris this term for the Frank J. Guarini Institute for International Education. She learned about the blaze on Monday night as she and some students were leaving a theatrical performance in Montparnasse, just over a mile from the cathedral.

“We had turned our cell phones off, but when we emerged from the theater, we saw the news and the images. We simply didn’t believe it at first,” says Higgins.

“Watching the television reporting late into the night, I was struck by the two most-repeated words on the lips of politicians, religious leaders, other public figures, and bystanders: ‘patrimoine’ and ‘solidarité.’ The first of these can include monuments but also literary works, works of art, wine, iconic foods and recipes, and many other things. It’s the French term for the national cultural heritage that, theoretically, at least, belongs to and unites everyone.” 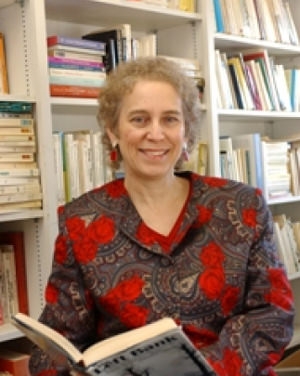 Professor Lynn Higgins is leading Dartmouth’s Foreign Study Program in Paris this term.
Higgins says the FSP students had visited Notre Dame two weeks before it went up in flames, as part of their art history course.

“Professor Pierre Léglise-Costa, who teaches the course, has been taking Dartmouth students to visit the cathedral since the first Paris FSP offering in 1999,” says Higgins. “Léglise-Costa knows and loves every detail of that church, and he sent a heartfelt message after the fire in which he evoked the history and pre-history of the Cathedral and his lifelong association with it through his teaching.”

To his Dartmouth students, who were among the last visitors to see the church as it has stood for centuries, Léglise-Costa wrote, “Notre Dame is an indispensable site for understanding Gothic architecture, Paris, the beauty of stained glass windows, the theology of light, the experience of architectural space, the importance of the cult of Mary, and so much more.”

On the morning after the fire-engulfed spire toppled, Higgins invited her students to share their thoughts and feelings about the catastrophe. “Far into the future, they expect they will be asked, and will ask each other, Where were you when Notre Dame burned?”

Higgins told the students that for earlier generations, the cathedral was a beacon of peace at the end of World War II. “Paris Mayor Anne Hidalgo remarked Monday night that when the bells of Notre Dame rang to announce the end of the occupation, the sound could be heard around the world.”

A scholar of French literature and film, Higgins is “fascinated with the way, in France, literature is so often a point of reference and a source of ‘solidarité,’ ” noting it was Victor Hugo, author of The Hunchback of Notre Dame, who inspired the 19th-century restoration of a church that had fallen into neglect.

“Hugo’s beloved novel brought the cathedral to life again, and his novel was followed by the creation of the Monuments Historiques, an official agency for the protection and promotion of the national architectural heritage.”

“He ended his speech with a resolutely optimistic aphorism: ‘Nous la rebâtirons, tous ensemble,’” says Higgins. “Together, we will rebuild our cathedral.”