Before a crowd of 1,000, President Hanlon tells young alumni, “We will go far when we go together.” 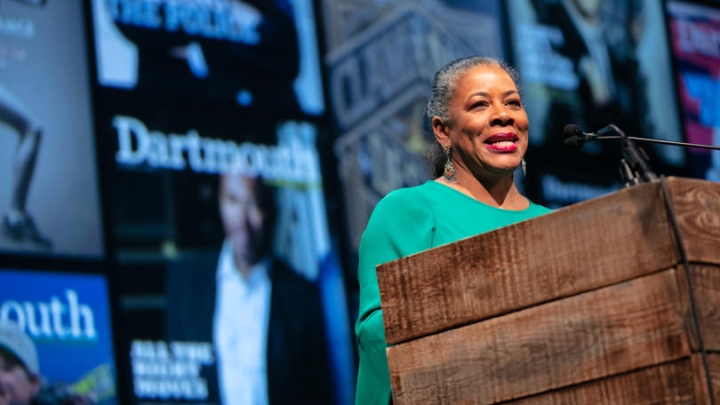 Speaking before some 1,000 alumni, parents, and friends Tuesday at New York’s Lincoln Center, President Philip J. Hanlon ’77 announced that supporters have committed more than $2 billion to The Call to Lead: a Campaign for Dartmouth, putting the historic fundraising effort at two-thirds of its overall goal.

Attaining this milestone just 11 months after the campaign’s public launch—during Dartmouth’s 250th anniversary year—demonstrates the community’s shared commitment to Dartmouth’s distinctive model of education, to driving change that will improve the human condition, and to preparing students for lives of wise leadership.

“We are grateful for every gift to The Call to Lead,” President Hanlon told the cheering audience. “All gifts matter, not just the ones you read about. This is not a campaign where a handful of individuals or families determine our destiny. The best things we accomplish at Dartmouth we do as a community.”

Focusing on the community effort behind The Call to Lead rather than individual gifts, Hanlon listed key collective achievements that have propelled the campaign to a level attained by only a few dozen colleges and universities:

Also related to the campaign, the entire Dartmouth community is striving to log 250,000 hours of community service this year in honor of the 250th anniversary through a project known as The Call to Serve.

Total giving to the campaign stood at $2.02 billion as of Tuesday night. The results of that philanthropy already are benefiting all five Dartmouth schools, especially through financial aid, dozens of new professorships, and an array of investments bolstering teaching, research, and residential life.

Major building projects funded by the campaign to date include the renovation and expansion of the Hood Museum of Art, which re-opened in January, and construction of the new Moosilauke Ravine Lodge, which greeted its first class of students last fall. Dartmouth broke ground this winter on a 160,000-square-foot engineering-computer science building at the West End of campus.

The Call to Lead, which advances a comprehensive strategic vision for Dartmouth, was launched publicly in April 2018 and is scheduled to conclude in 2022.

Building on the momentum of the campaign’s past year, the Dartmouth College Fund has issued a challenge to the College’s youngest alumni—the classes of 2000 through 2019—that could earn each class an endowed scholarship.

“More than a third of you in the audience tonight are young alumni—and I know many of you are making annual gifts to the Dartmouth College Fund,” Hanlon told the audience at Tuesday’s event. “So here’s an offer for every class that graduated from the year 2000 onward: If you can reach a 45 percent participation goal for class giving by June 30, an anonymous donor will donate a $100,000 undergraduate scholarship fund in your class’s name. If all classes achieve the giving threshold, you will each add a student in your class’s name, every year, for as long as Dartmouth exists. How amazing is that?”

The full campaign goal for financial aid is $500 million, with endowed scholarships forming a critical component. More than half of all Dartmouth undergraduates now receive financial aid, and the average individual award is currently more than $53,000. Dartmouth guarantees that admitted students whose families have total incomes below $100,000 and typical assets will qualify for scholarships that exceed the College’s tuition.

Fahey has served Dartmouth as a trustee, a member of Thayer School of Engineering’s board of overseers, a co-chair for the Campaign for the Dartmouth Experience, and president of his 50th-year reunion class. As past chair of the Dartmouth College Fund Committee, he helped the Fund set at least two giving records.

“Peter’s work on behalf of the Dartmouth College Fund has helped make the Dartmouth experience available to literally thousands of students who otherwise might not have been able to attend,” said Steve Mandel Jr. ’78, former chair of the Dartmouth Board of Trustees. “It’s a great legacy that he should be proud of. We’re certainly proud of him.”

In another highlight of the program, two recent Dartmouth graduates, a current student, and three faculty members shared examples of transformative learning experiences with far-reaching effects.

Sam Neff ’21, a biochemistry and history major diagnosed with cystic fibrosis when he was six months old, described research he is helping conduct at the Geisel School of Medicine’s Lung Biology Center, directed by Bruce Stanton, professor of microbiology and immunology.

“As someone who’s deeply interested in science, it’s been difficult to sit around and wait for medical advances to happen,” Neff told the audience. “Growing up in New Hampshire, I always wanted to come to Dartmouth. In particular, I was really excited by the fact that undergrads get to do primary research. But I didn’t realize the extent to which Dartmouth leads CF research. I found that out when I met Bruce and asked to get involved with researching my own medical condition.”

Board of Trustees Chair and Campaign Co-Chair Laurel Richie ’81 closed the program with a powerful call to action.

“We invite each of you to join us in this important work,” Richie said. “To find a way that works for you in achieving Dartmouth’s ambition. Because at its core, The Call to Lead is a call to act, to support, to engage, and to serve.”

The event was one of a dozen campaign and 250th anniversary celebrations across the country. Next week, gatherings will be held in Dallas (April 8) and Houston (April 10). Learn more about The Call to Lead campaign and upcoming celebrations. 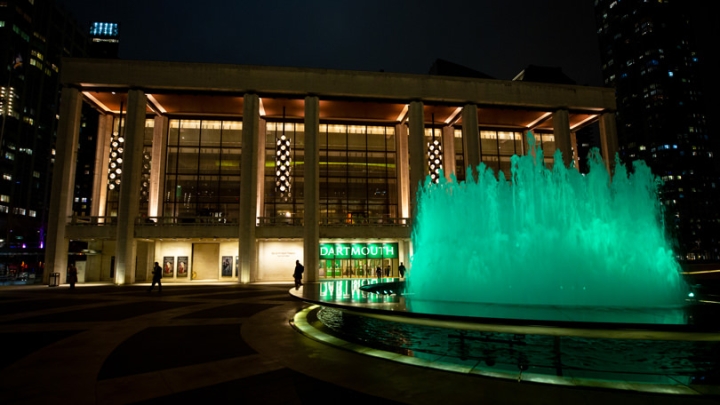 The Lincoln Center was lit green for the Dartmouth event.
Written by
Office of Communications
Share this
FacebookTwitterEmail
In the News

Description
President-elect Sian Leah Beilock is featured in a story about how six Ivy League universities will have female presidents this fall. “It’s important to show that different people can take on leadership roles at any institution,” she says.
Politico
In the News