The award recognizes the library’s stewardship of the Augustus Saint-Gaudens papers.

The ceremony will take place on June 21 at Rauner Special Collections Library, with Dean of Libraries Sue Mehrer accepting the medal on behalf of the College.

“We are so honored to receive the Saint-Gaudens Medal,” says Mehrer. “It is a testament to the work we do every day to ensure that collections entrusted to Dartmouth are preserved and made widely accessible. The papers of Augustus Saint-Gaudens are a wonderful example, as they support teaching on campus but also draw researchers from around the world to the Dartmouth Library.”

Jay Satterfield, head of special collections at Rauner Special Collections Library, says the Cornish Colony-related materials, and the papers of Augustus Saint-Gaudens, in particular, are “among the most heavily used manuscripts in special collections. Part of what makes these collections so relevant is how they comment on so much more than just the work of the individuals represented. They provide a window into the realm of cultural production and the role of artists in society at a time when the arts in America were establishing a unique identity.”

The Saint-Gaudens Medal, established in 1988, is awarded from time to time to those who, by their talents and vision, have made a significant contribution to the arts in America in the tradition of Augustus Saint-Gaudens. The Saint-Gaudens Medal has been presented 10 times. It  was last given in 2016 to author David McCullough for his 2011 book The Greater Journey: Americans in Paris, which the author based on extensive research in the Saint-Gaudens papers. 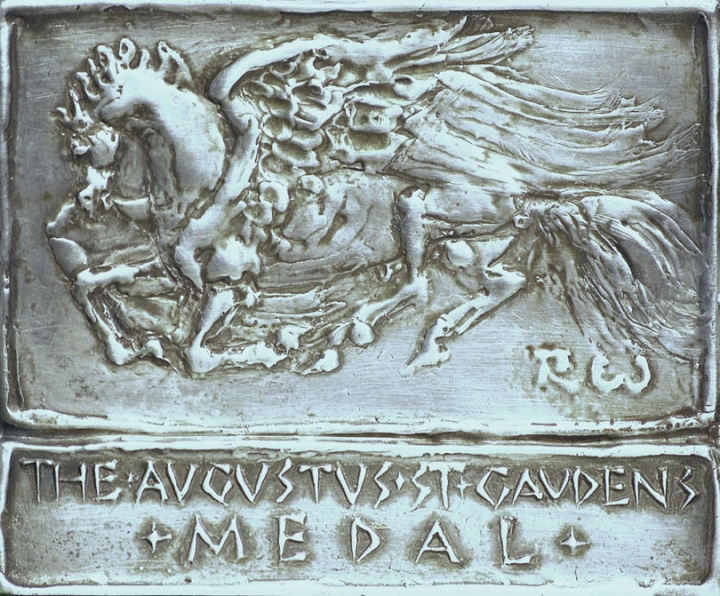 The medal was designed in 1992 by sculptor Robert W. White, a longtime trustee of the Saint-Gaudens Memorial.

Saint-Gaudens Memorial president Thayer Tolles says, “We proudly present this medal to Dartmouth College Library in recognition of generations of students and scholars who have benefited from access to these collections. It is particularly fitting that we celebrate the long relationship between the memorial and Dartmouth in our centennial year and its 250th.”

The Saint-Gaudens Memorial is a nonprofit organization chartered by the state of New Hampshire in 1919 as a permanent memorial to honor Saint-Gaudens’ legacy and to safeguard his home, studios, gardens, and collections in Cornish. The president of Dartmouth has served as an ex-officio member of the board of trustees since its founding.

The organization donated the property and contents to the federal government in 1964 to create the Saint-Gaudens National Historic Site, operated by the National Park Service. The organization continues to sponsor exhibitions, concerts, artist fellowships, and educational programming at the park. Recently renamed the Saint-Gaudens National Historical Park, it is open to the public seasonally from May to October.