At Dartmouth, Students Get Front Row Seat at the Primary Race

Democratic hopefuls have been visiting campus, and others are making plans to be here. 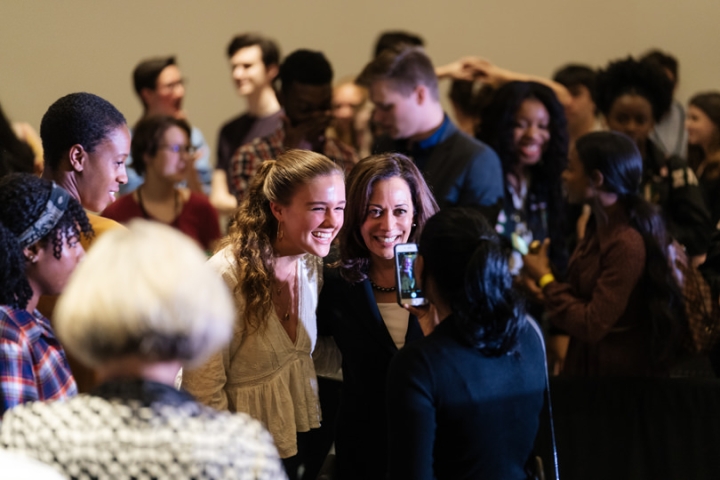 Presidential primary candidate Sen. Kamala Harris takes a photo with a student after speaking to a crowd of more than 400 people in Alumni Hall during a Dartmouth campaign stop on Tuesday. (Photo by Eli Burakian ’00)
4/24/2019
Body

While it is almost 10 months before any votes are cast, the New Hampshire primary is already in full swing in Hanover, giving students a unique opportunity to personally size up the wide field of potential presidents.

Democrats Sen. Kamala Harris (D-Calif.), Sen. Elizabeth Warren (D-Mass.), and author Marianne Williamson visited campus in the past two weeks, former Obama cabinet official Julián Castro and tech entrepreneur Andrew Yang will be making stops in the next two weeks, and others are trying to organize visits before the end of the term.

To make sure they got in, Kara Chamberlaine ’21 arrived early for the Kamala Harris campaign event Tuesday with friends Daniella Omeruo ’21, Marina Cepeda ’21, and Esther Omene ’21. They ended up sitting on the stage behind Harris and likely appeared in the background of some national news coverage of the campaign stop.

“I think it’s truly amazing to actually be here experiencing history,” Chamberlaine said. “I remember in high school, looking at the presidential campaigns. I wished I was more involved. And now, actually sitting here to hear Kamala speak, is truly revolutionary.”

“I’m so happy to be at Dartmouth with you guys and I just want to thank you because the level of activism and leadership that is coming out of this campus really represents the best of who we are as a country,” Harris told a crowd of about 100 students and area residents who couldn’t get into a filled-to-capacity Alumni Hall, as they stood on the plaza outside the Hopkins Center and leaned over the Hanover Inn balcony on Tuesday afternoon.

Harris also met for a few minutes with the Dartmouth College Democrats before her event, and she was introduced by New Hampshire state Rep. Garrett Muscatel ’20, a Dartmouth junior who is serving in the state legislature.

A week earlier, on April 13, Warren spoke to a crowd of about 450 in the Hanover Inn ballroom, answered questions, and made sure to chat and take a photo with everyone who wanted to meet her during a Saturday afternoon swing through town.

“I love that we are getting so many political candidates,” said Ben Vagle ’22 as he waited in line to see Warren. “I’m someone who follows politics pretty intensely, and it’s amazing we can see all of these people in person. I like the idea of having a ringside seat for all of this. I voted for the first time in the mid-term elections; this will be my first presidential election and I think it’s very important. Young people don’t turn out enough and we definitely have interests at stake.”

And on April 17, self-help author and progressive activist Marianne Williamson spoke to a more intimate gathering of about 40 students and community members in the faculty lounge at the Hopkins Center, where she took questions and discussed her agenda. Muscatel and member of the College Democrats hosted the gathering.

“The Dartmouth Democrats mission at its core is to engage campus politically and that lines up perfectly with the core values of the first-in-the-nation primary,” says Michael Parsons ’20, executive director of the College Democrats. “We believe that voters, and specifically young voters, should get to interview every candidate.”

This provides an invaluable experiential learning opportunity says Dean Lacy, a professor of government and assistant provost for faculty recruitment.

“Dartmouth students get to see the candidates earlier, more often, and in smaller settings than students at nearly any other U.S. university,” Lacy says.

They can have a real impact, he says. “The size and excitement of crowds at early campaign events do much to determine which candidates get labeled as the ‘front-runners.’ ”

And this all occurred in the month of April. Presidential hopefuls for the 2020 cycle have been dropping by since 2018. New Jersey Sen. Cory Booker was at an October event at Dartmouth campaigning for Democrats in the midterm. In January, Rep. John Delaney, a Maryland Democrat, was at a meet-and-greet in Hanover and Democratic Washington Gov. Jay Inslee met with students at the Hopkins Center. Dartmouth alumna Sen. Kirsten Gillibrand ’88 (D-N.Y.) campaigned on campus in February.

“Politics is very special here. It’s all very close quarters, you get to meet a bunch of people, you get to listen, and exchange ideas. It’s what is known in New Hampshire as ‘retail politics,’ ” says Parsons. 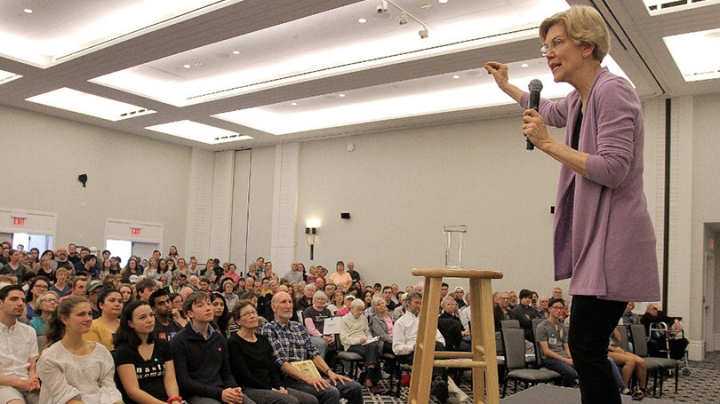 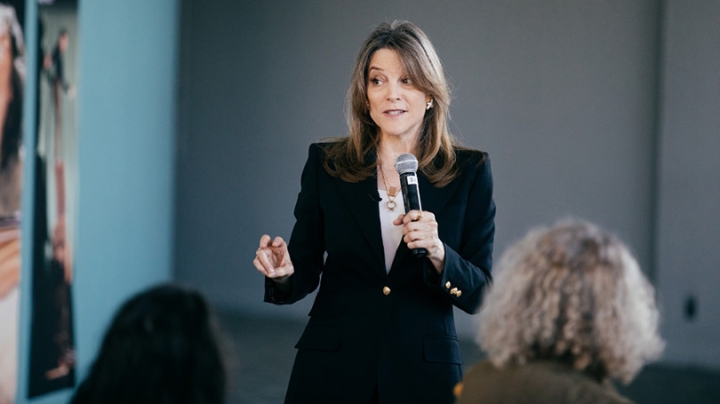 Author and progressive activist Marianne Williamson met with about 40 students and local residents on April 17 at an afternoon event at the Hopkins Center hosted by the Dartmouth Democrats. (Photo by Robert Gill)
Written by
Bill Platt
Share this
FacebookTwitterEmail
Photos