The government major will work on issues related to democracy, conflict, and governance. 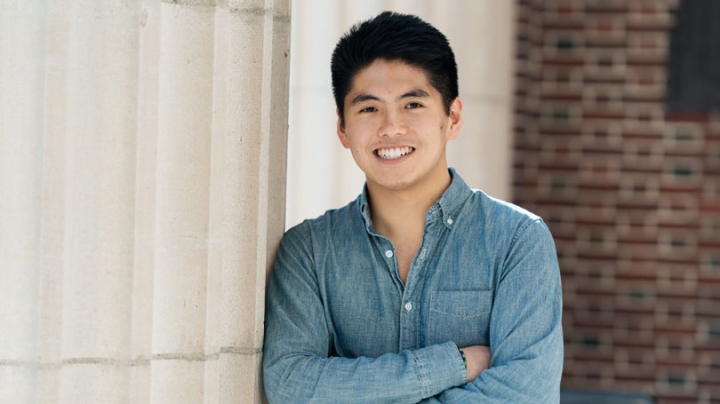 “I’m interested in how law and government can ensure that every person has a baseline of rights and well-being,” says David Wong ’19. (Photo by Eli Burakian ’00)
4/23/2019
Body

David Wong ’19, a government major from West Chester, Penn., has been named a James C. Gaither Junior Fellow at the Carnegie Endowment for International Peace—one of 11 recent graduates nominated from participating colleges and universities to conduct policy research alongside Carnegie’s senior scholars in Washington, D.C.

“I’m honored to be chosen, and I’m looking forward to being exposed to the thoughts of some of the leading thinkers and theorists on these issues,” says Wong, who will be working on issues related to democracy, conflict, and governance. “I think this will be a great way for me to better understand what approaches and techniques will best promote and protect democracy.”

He developed his interest in democracy at Dartmouth, he says, in courses on ethnic conflict, populism in Europe, and economic development in Latin America.

“I’m interested in how law and government can ensure that every person has a baseline of rights and well-being,” he says. “Achieving that is something governments constantly struggle with, especially with globalization and accelerating technological development. And in areas where inequality is increasing, we’re beginning to see the emergence of different political movements that could challenge our basic rights.”

Wong spent a term at the University of Oxford on the government department’s exchange program. “It was a great experience to learn about the British political system and its evolution,” he says.

At Dartmouth, he has served as an editor for the Dartmouth Law Journal, as president and senior adviser for Colleges Against Cancer, a member of Palaeopitus senior society, a trip leader for Dartmouth Outing Club first-year trips, a War and Peace Fellow through the John Sloan Dickey Center for International Understanding, and as public relations chair for the Student Center for Research, Writing, and Information Technology, which assists members of the Dartmouth community with writing and multimedia projects.

He served as a James O. Freedman Presidential Scholar Research Assistant to Lecturer in Writing Julie Kalish, studying the judicial philosophy of Supreme Court Justice Samuel Alito, and was an early inductee into Dartmouth’s Phi Beta Kappa chapter. Outside of the College, he spent his off-terms interning with the Municipal Court Unit of the Philadelphia District Attorney’s Office and the Civil Division of the U.S. Attorney’s Office for the District of Columbia.

Of his Dartmouth experience, he says, “It’s exceeded my expectations. As a senior, I’ve come to appreciate the breadth of opportunities available here. If I were to do Dartmouth again, I might take a completely different path, and that’s the beauty of it—there’s so much to explore here, you can’t possibly do it all.”

“Being selected for the Gaither Junior Fellowship Program is a prestigious achievement, reflecting David’s excellent academic record and personal qualities,” says Peter DeShazo ’69, a visiting professor of Latin American, Latino, and Caribbean Studies and former deputy U.S. assistant secretary of state for Western Hemisphere affairs. “His enthusiasm for and very promising analytical ability in the areas of international affairs and public policy formulation match well with the work of the Carnegie Endowment’s Democracy, Conflict, and Governance Program. I’m certain David will take great advantage of this exciting opportunity.”

Of receiving the fellowship, Wong says, “I am extremely thankful for the support of my friends and family. Their help was instrumental throughout the whole process.”

The Carnegie Endowment is a global network of policy research centers in Russia, China, Europe, the Middle East, India, and the United States whose mission, according to its website, is “to advance peace through analysis and development of fresh policy ideas and direct engagement and collaboration with decision-makers in government, business, and civil society.”

Students interested in learning about the Gaither Junior Fellowships and other fellowship opportunities should visit Dartmouth’s Office of Fellowship Advising.