Work to date on Dartmouth’s sustainability goals will be the focus of an April 22 forum. 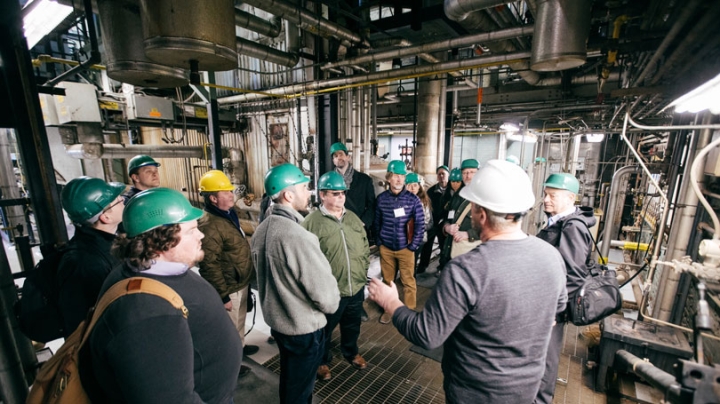 Dartmouth will be celebrating Earth Day next week as the institution marks progress toward achieving a set of sustainability goals announced two years ago by President Philip J. Hanlon ’77.

Topping the list is development of the Dartmouth Green Energy Project, a planned $200 million-plus initiative to build a biomass heating facility and hot water distribution system that would replace the existing central steam-heat system and mark a major step toward reducing greenhouse gas emissions, putting the College far beyond the energy marker set out by President Hanlon in 2017.

The College has also had success in projects to be more efficient and sustainable in food and has a corps of students analyzing progress in these and other areas, including recycling and waste. The two years of work followed the 2017 release of a report by a taskforce Hanlon convened a year earlier, on Earth Day 2016. In the report, Our Green Future, the interdisciplinary group of faculty, students, and staff proposed ways to transition to a low-carbon future and recommended addressing sustainability in energy, waste, food, and other areas.

The report led to the president’s pledge to make progress in six areas: reducing greenhouse gas emissions; transitioning off No. 6 fuel oil to renewable sources; establishing a more efficient energy distribution system; studying ways to reduce waste; considering the environmental impact of food choices; and creating a corps of students to track progress.

“We’ve made progress in every single one of these areas,” says Rosi Kerr ’97, Dartmouth’s director of sustainability. “Still, we have plenty left to do. We need to continue to push ourselves not just because it reduces our negative environmental impact and makes Dartmouth sustainable, but also because it makes Dartmouth better.”

Progress on Dartmouth’s sustainability goals will be the focus of an Earth Day Sustainability Forum, set for 6:30 p.m. on April 22, in Filene Auditorium in Moore Hall, featuring opening remarks from Hanlon.

“We hope people turn out to learn more about the work that’s been going on, to share their ideas for the future, and find out how they can help,” says Kerr.

How Far Have We Come?

In addition to the goals Hanlon set out, the College has installed rooftop solar arrays on 12 buildings in the past two years. Together, the solar arrays generate just under 2 percent of the electricity consumed on campus. The College’s engineering and utilities team is working to identify viable sites for larger-scale solar systems to serve the campus and estimate that a large-scale system could generate as much as 20 percent of the electricity needed on campus.

“Our world has a long way to go to secure a sustainable future,” says Executive Vice President Rick Mills. “With these efforts, Dartmouth is looking to keep pace and position ourselves to move ahead of the curve. Construction of the Green Energy Project will be one very visible sign of our commitment to our green future.”

The forum will be broadcast as a Zoom webinar. To access the forum, go to dartgo.org/earthday.