The alumnus presents his new film, “Into the Canyon,” on April 13 at the Hop. 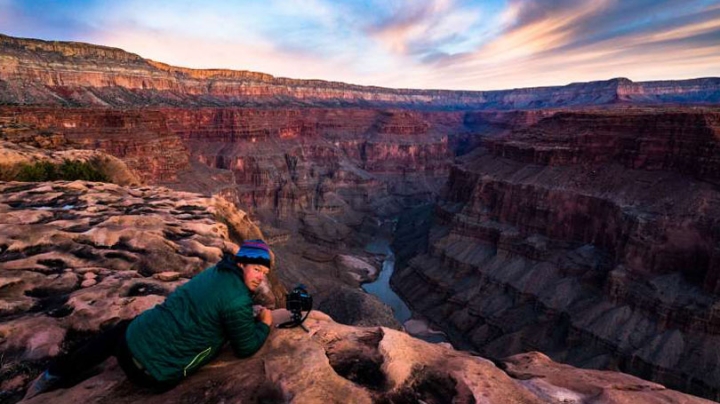 Pete McBride ’93 has spent over 20 years exploring the world with his camera. (Photo by Pete McBride ’93, courtesy of Dartmouth Alumni Magazine)
4/12/2019
Body

In September 2015, National Geographic photographer Pete McBride ’93 and writer Kevin Fedarko set out to thru-hike the entire length of the Grand Canyon. By the end of the 750-mile journey, completed in eight sections over the course of 13 months, McBride had lost 35 pounds and suffered sprained ankles, shin splints, and hyponatremia.

The results of the trek—a book, The Grand Canyon: Between River and Rim, and a documentary film, Into the Canyon—aim to raise awareness of threats facing the national park, which celebrates its centennial this year.

Into the Canyon will screen Saturday at the Hopkins Center for the Arts. McBride will be in attendance at the screening. He will also talk about water conservation and the new film as the closing speaker at TEDxDartmouth 2019. Learn more and register at TEDxDartmouth.

“The canyon’s scale is so beyond human comprehension,” says McBride. “There’s a greater range of biodiversity than in any other national park. It’s a giant living classroom. It’s also incredibly harsh, foreboding, and humbling. The canyon respects nobody.”

See a collection of McBride’s photos and a movie trailer for Into the Canyon, published by Dartmouth Alumni Magazine.