Hanlon spoke to a gathering of higher education leaders at the Naval Academy last week. 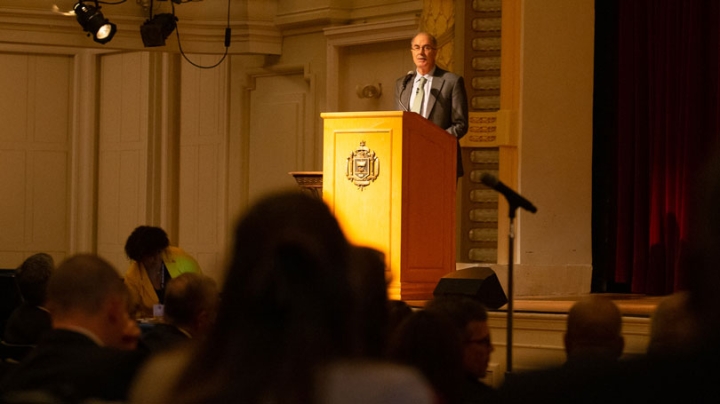 President Philip J. Hanlon ’77 gave a keynote address at an April 4-5 summit on sexual assault and sexual harassment hosted at the United States Naval Academy in Annapolis, Md., by the secretaries of the U.S. Navy, Army, and Air Force. (Photo courtesy of the U.S. Naval Academy)
4/10/2019
Body

At a summit on sexual assault and sexual harassment at America’s colleges, universities, and service academies last week, Dartmouth was held up as a model for how an institution can take action to make its campus safer and more inclusive for all.

The April 4-5 summit was hosted at the United States Naval Academy in Annapolis, Md., by the secretaries of the U.S. Navy, Army, and Air Force. Participants included leaders from the military and higher education.

President Philip J. Hanlon ’77, who delivered one of two keynote addresses, spoke about Dartmouth’s efforts to change campus climate and address the problem of sexual violence and harassment on campus.

“We know that our institutions cannot maximize academic excellence unless campuses are safe, equitable, diverse, and inclusive,” President Hanlon said in his address. “If there is one thing that is clear, it’s that we cannot achieve our highest aspirations as individuals or institutions without eliminating behaviors that cause the most harm to our communities and inevitably hold us back.”

Secretary of the Air Force Heather Wilson said, “It was an honor to have Dr. Hanlon share Dartmouth’s programs and progress, his insight was invaluable to the inaugural conference. That’s what the conference was about—willingness, as institutional leaders, to admit that we don’t have the answers, but we all know we have problems. And we’re more likely to be able to reduce the instances of sexual assault if we work together.”

Dartmouth’s Vice President of Communications Justin Anderson, who attended the summit, said he was impressed by how informed summit participants were about Dartmouth’s efforts.

“I was struck by how much leaders at other campuses are paying attention to Dartmouth’s climate initiatives,” Anderson said. “Our efforts are being recognized on a national level.”

Hanlon’s speech outlined the three ongoing initiatives—Moving Dartmouth Forward (MDF), Inclusive Excellence (IE), and the Campus Climate and Culture Initiative (C3I)—that Dartmouth has launched in the past five years to combat high-risk behavior among undergraduates; improve the College’s commitment to diversity, equity, and inclusivity; and address sexual misconduct and other abuses of power.

“We think of these three initiatives, which are complementary in scope, as part of a comprehensive package,” Hanlon said. “No single action we’ve taken is, by itself, new or innovative. The lessons to be learned are from how we’ve put them together in an effort to create a campus that is diverse, inclusive, equitable, and safe.”

Among the lessons Dartmouth is learning, he said, is the reality that “no single action or intervention contains the consummate solution” to these complex problems. Crucial to success, he said, are transparency, communication, data gathering and analysis, an objective assessment from outside experts, and a long-term commitment to institutional change.

“Tackling these issues is a marathon, not a sprint,” he said. “When it comes to sexual assault prevention and improving campus climate, institutionalization, as opposed to initiatives, is the ultimate goal. And institutional change is hard at colleges and universities. You may remember the old saying that ‘universities are where glaciers go to rest.’ The most important thing to remember is to keep your eye on the prize and to clearly identify achievable interim tasks that will get you to your goal.”

In a wide-ranging question-and-answer session following his remarks, Hanlon spoke more specifically about aspects of Dartmouth’s three initiatives, including the enforcement of MDF’s campus-wide ban on hard alcohol, progress on the implementation of C3I’s department-level climate surveys, ways of incorporating the values of IE and C3I in faculty and staff performance evaluations, and how to assess data related to the initiatives.