Darryl Mobley ’19 transitions from football to music through a Robert Dance ’77 grant. 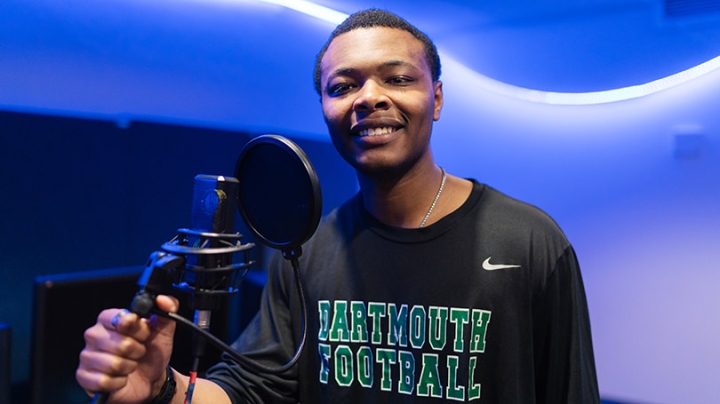 Darryl Mobley ’19 has released a rap album, The Fourth Wall, after an injury interrupted his Big Green football season in his junior year. (Photo by Eli Burakian ’00)
4/16/2019
Body

Darryl Mobley ’19 had recovered from an injury and was ready to start playing Dartmouth football again when his senior year took an unexpected turn.

With the encouragement of Buddy Teevens ’79, the Robert L. Blackman Football Coach at Dartmouth College, Associate Professor Jodie Mack, and his friend James Rhodes ’19, he left the team and turned his attention to creating The Fourth Wall, a debut rap album, under the moniker Mobesx.

A serious ankle injury had sidelined Mobley from playing quarterback and wide receiver for the Big Green for most of his junior year. But after Mobley worked to return and got to the point that he was cleared to play, Teevens, in conversation with the undergraduate and his parents, cautioned that reinjury could threaten Mobley’s ability to walk for the rest of his life. 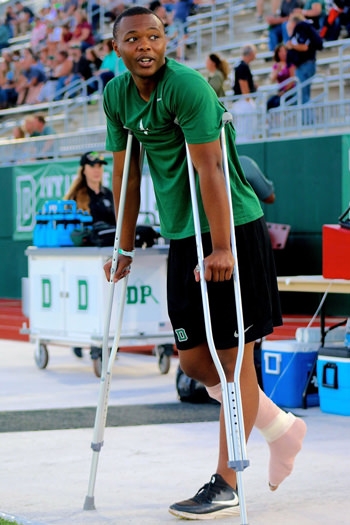 Darryl Mobley ’19 worked to recover from an ankle injury so he could return to play, but Coach Buddy Teevens ’79 urged him to pursue his music rather than risk permanent joint damage. (Photo courtesy of Darryl Mobley ’19)
“Coach Teevens knew that I had made songs before, just messing around with the football team. I had told him and kids on the team had told him in my freshman and sophomore years. And he brought it up when I decided to stop playing football. He thought I should take it more seriously,” Mobley says.

He and his friend Rhodes, who became the sound engineer on The Fourth Wall, had taken classes with Mack in the film and media studies department. Mobley, a studio art and theater major, and Rhodes, a history major, had spent time in the recording studio since they’d met in their first year at Dartmouth, and Mack had been supportive and encouraging.

So when Mobley turned from football to rap production, Mack and Rhodes helped him research Dartmouth arts funding and Mobley ended up applying for and winning a grant from the Robert Dance ’77 Initiative Fund, which supports special projects in the performing or visual arts at Dartmouth that can be shared outside of traditional fine arts venues.

While the Robert Dance ’77 Initiative provided financial support for the project, it was the recognition from Dartmouth, which the Dance award represented, that was most important to him, says Mobley.

“I really wanted to do something with the school because I felt a lot of the music represented my experience at Dartmouth,” he says. “We wanted to find a way to formalize that relationship. It was more about being able to work with the school and to represent them well.”

In his music as Mobesx, Mobley, who grew up in Austin, Texas, aims to represent an urban perspective and marginalized groups differently from what he often sees in mainstream music, he says.

“I don’t swear in any of my records or use derogatory language toward women. So there is a positive underlying message. I also talk about real stuff— relationships and such—but not with that negative component.”

The release of the single What I Like at the end of March included the note: “Mobesx believes that modern music too frequently uses derogatory language to slander or negatively depict women, people of color, and individuals of certain religious preferences, for monetary gain. After applying for, and winning, the Dartmouth College Robert Dance ’77 Fund, Mobley’s mission was to create an album that would uplift and unify.”

“We want to find different ways to have the community relate to the art that we’re doing,” Rhodes says.