‘Understory’: A World Premiere and a Requiem for Long Lost Trees

The interactive composition, commissioned by the Hop, will be presented at the Hood. 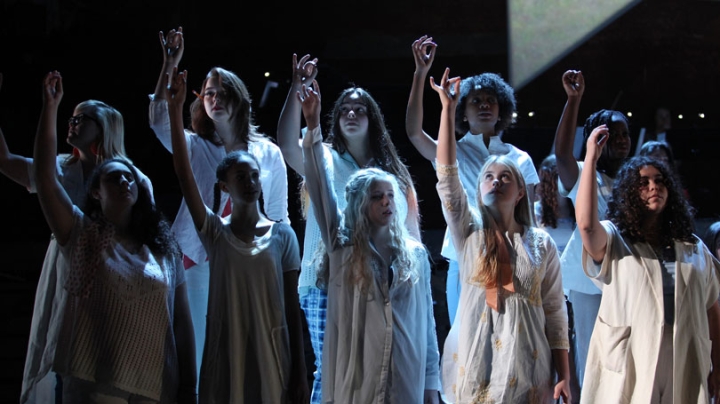 The Brooklyn Youth Chorus will perform Carla Kihlstedt’s Understory at the Hood Museum of Art on April 16. (Photo by Julieta Cervantes)
4/09/2019
Body

Anyone who strolls through the Russo Atrium at the Hood Museum of Art around 5:30 p.m. on Tuesday, April 16, will become part of the world premiere of Understory, an immersive, interactive work by internationally recognized composer, violinist, and singer Carla Kihlstedt. The performance is free and open to the public.

A teacher at the New England Conservatory and at the Vermont College of Fine Arts, Kihlstedt created her composition over the past year in collaboration with the Environmental Studies Program as part of the Hopkins Center for the Arts’ ongoing STEMArts initiative.

Hopkins Center Director Mary Lou Aleskie says the piece evokes the forest of white pines that pre-dated Dartmouth’s founding and the development of the campus.  (“Understory” is the botanical term for vegetation beneath the canopy of a forest.)

“It’s a requiem for trees that are no longer. When you add displacement of culture and people that were on this ground, it evolved into a dialogue about the environment and Native American traditions and respect for the land.”

Aleskie says Kihlstedt has tempered the sense of loss with sounds of hope coming from young voices in the Brooklyn Youth Chorus. Singing a cappella and without a conductor, the vocalists—ages 10 to 14—will gather in groups of threes throughout the atrium, with each trio representing a tree. The audience will be encouraged to walk through this “forest” to hear from the individual “trees” while also perceiving the “forest” as a community. The performers will make nonverbal sounds, speak short phrases, and sing lyrics, some derived from  the poetry by father-and-son Abenaki poets Joseph and Jesse Bruchac.

“This piece is an invitation to pause and inquire,” says Kihlstedt. “To come into the space with a sense of curiosity, not ownership. Too often we think of land as something we own. But once you look at the larger story, realizing that the land has a story of its own that extends way before us and way after us, the sense of ownership becomes absurd.”

Kihlstedt says more and more composers are raising awareness about the changing environment by “working with sound and observations and settings. There is a lot of study into what the forests sound like now versus 100 years ago. It’s a different world.”

“The things that Nick said about the deep connection between traditional story, local observation, folklore, science, and mythology became cornerstones for my thinking about the piece,” says Kihlstedt.

“We took a walk in the woods and had a great discussion about her work and about longstanding Abenaki/Wabanaki connections to the lands and waters of this region,” says Reo. “Carla is a very good listener and she had many good questions.”

Terry Osborne, a senior lecturer in the Environmental Studies Program, says, “My interactions with Carla were inspiring. I marveled at her ambition and creativity and her openness to new ideas and perspectives as she came to learn about this landscape and translate that growing understanding into an embodied choral composition.”

The light-filled Russo Atrium is an ideal location for the premiere, says John Stomberg, the Virginia Rice Kelsey 1961s Director of the Hood Museum of Art.

“That Kihlstedt’s work embraces the origin of the land in this area enhances the acknowledgement of the Abenaki people that has become inherent to the Hood’s practice,” says Stomberg. “The performance, merging song, music, and poetry, extends the museum’s commitment to all forms of art, and the collaborative nature of the project also bodes well for future projects that combine the resources of the Hood and the Hop.”

To date, STEMArts projects have involved emerging composers Fay Wang (2013–14), Tristan Perich (2015–16) and Molly Herron (2016–17). Along with other recent cross-disciplinary programming by the Hop, these commissions are part of the Hop’s Mellon Foundation-funded initiative to more broadly engage students in the arts, especially classical music. The initiative has included substantive, multi-campus research that—among other findings—indicates that students more readily engage in the arts when they see how the arts connect to other academic areas.