Her lecture, “In Deepest Utopia,” revealed motivations and methods behind her work. 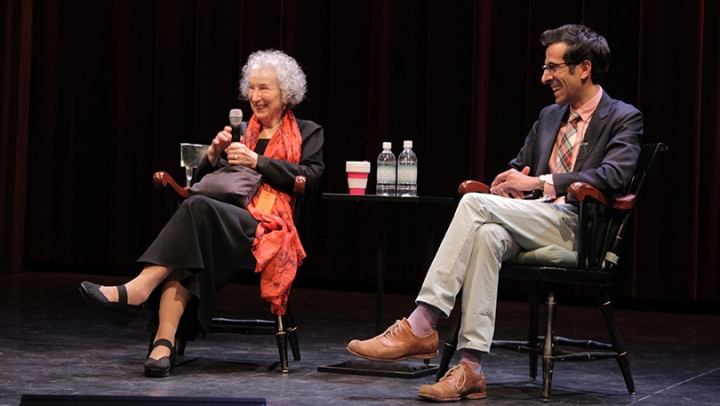 The institute, established in 1982 by a group of Dartmouth faculty to foster the study and teaching of ethics through public programs, fellowships, and research funding, often invites distinguished guests to campus to discuss their work. Atwood’s audience included many students, who, after her lecture, posed wide-ranging questions about her philosophy and creative process. She had spent the afternoon working with students affiliated with the Ethics Institute and with a senior seminar taught by Assistant Professor of English Alysia Garrison called “Climate Fiction.”

Sonu Bedi, the institute’s Hans ’80 and Kate Morris Director and the Joel Parker 1811 Professor in Law and Political Science, explained in his introduction that Atwood’s visit to campus was a stroke of luck. Two years ago, he was seated next to her on a plane to Indiana, where they were both scheduled to give lectures.

Bedi thought the person sitting next to him was the famous writer. But he wasn’t certain.

“She graciously asked me what my talk was about—and you know, you ask an academic what they are going to talk about and they will answer—so I did.”

Then Bedi asked his seatmate, “What is your talk about?”

“She said, ‘I am going to talk about a book I’ve written called The Handmaid’s Tale,” Bedi said, chuckling.

“That’s how we came to have Margaret Atwood here today.”

Blending humor with serious warnings about the rise of authoritarian governments and environmental degradation, Atwood discussed the origins of two of her novels, Oryx and Crake (2003) and The Handmaid’s Tale (1985).

Oryx and Crake, a work of speculative fiction, is about a post-apocalyptic group of human-like creatures called Crakers. Their story, Atwood said, raises an existential question about genetic engineering.

“How far can humans go in the alteration department before those altered cease to be human?”

Eighteen years earlier, in The Handmaid’s Tale, Atwood had spun the chilling fable of a right-wing theocracy in which women are subjugated and some are forced to bear children. That novel has inspired a wildly popular television series, an opera, a ballet, an audiobook, and a graphic novel.

“I was then living in West Berlin, which was encircled by the Berlin Wall,” Atwood recalled. “The Soviet Empire was still in place and was not to crumble for another five years. I experienced the wariness, the feeling of being spied on, the claustrophobia of changes of subject, and the oblique ways in which people could convey information, and these had an influence on what I was writing.”

Although the world of The Handmaid’s Tale may seem surreal and futuristic, Atwood says the underlying conditions restricting her characters’ freedom follow a strict rule she set for herself.

“I would not put anything into it that had not already happened. Having been born in 1939 and come to consciousness during World War II, I knew that established orders could vanish overnight. ‘It can’t happen here’ was not true.”

During her talk, Atwood, who is Canadian, cited the motto of her alma mater, the University of Toronto: “The truth shall make you free.”  But, she added, “I can tell you from personal experience that it doesn’t always hold up. Sometimes the truth will get you in trouble, especially if you’re living in a totalitarian state. Sometimes the truth will get you imprisoned or even murdered. The number of jailed and murdered journalists is increasing every year.”

Moving away from what she called a “pretty gloomy” view of today’s world, Atwood concluded with “rays of hope” for the future.

“The under-20s are demanding change,” she said. “And carbon emissions can be reversed.”

Atwood praised the Orkney Islands of Scotland for setting a goal to get all their energy from hydrogen, commended “low-cost and profitable ways of reversing carbon emissions and sequestering carbon while increasing biodiversity and productivity,” and cheered the creation of a “superpowered version of a plastic-eating enzyme.”

A long line of students had questions for the author. The first came from Lily Hanig ’19.

“If you had one piece of advice to bestow on our generation, what would it be?” she asked. 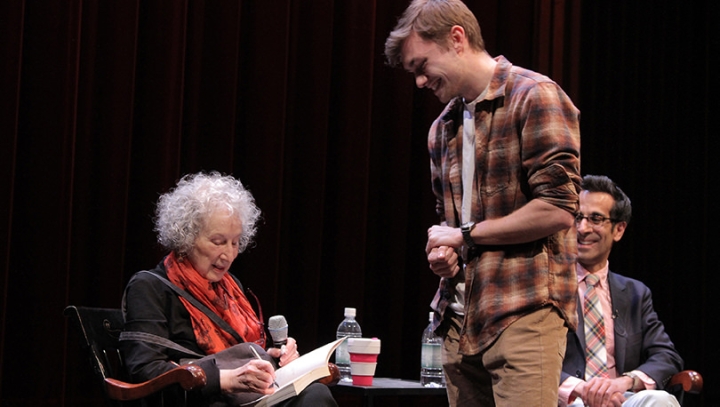 After her lecture, Margaret Atwood signs a book for Jack Jacobs ’21. (Photo by Herb Swanson)

In his turn at the microphone, Jack Jacobs ’21 said that his mother, a public school librarian, had bought Atwood’s novel The Robber Bride on her honeymoon many years ago, and still loves it.

“Her birthday is coming up,” Jacobs told Atwood. “I wonder if you would you sign it?”

Not missing a beat, the author replied, “Throw it up here.” As the audience applauded, Jacobs made his way to the stage, and Atwood pulled out her pen and signed the book.

Responding to a final question, about the ethical responsibilities of fiction writers, Atwood issued a call to action.

“Let’s not say that a writer has a special ethical mission or duty,” she said. “I would prefer to say that everybody who lives in a society has a duty of some kind towards that society.

“I’m sorry to harp on voting. But thousands have died to get that right. Why should we ignore it? It was hard won and should not be lightly discarded.”