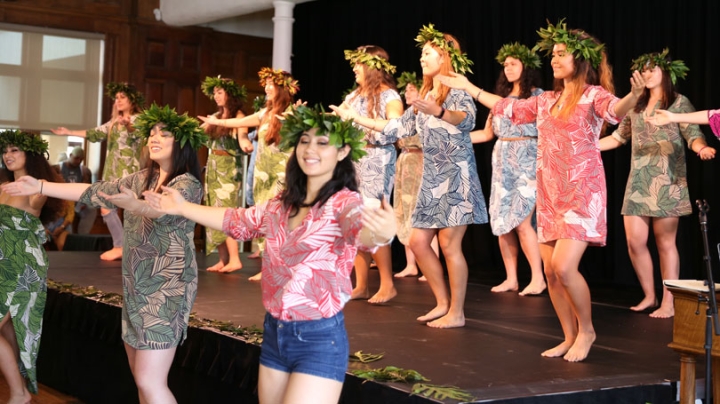 Hanover’s a long way from Hawaii, but you can still wear leis, dance the hula, and feast on native Hawaiian specialties this weekend when Hokupa’a, the Hawaii club supported by Dartmouth’s Native American Program, hosts its springtime luau from noon to 3 p.m., May 25, on Moore Plaza behind the Native American House.

“Luau is a cultural celebration, a gathering where we can all enjoy each other’s company—no matter where we come from—and enjoy all the foods Hawaiian students never get to eat unless they go home,” says Madison Maeshiro ’19, an executive member of Hokupa’a (Hawaiian for “north star”). She’s helping to organize the annual event along with other executive members Zoe Leonard ’19 and Ha’aheo Hanohano ’19.

The luau’s main course is kalua pig—juicy pork shoulder rubbed with sea salt and wrapped in ti (a plant native to Hawaii) or banana leaves. It’s traditionally roasted in an underground oven, but this year it will be flown in already cooked from Hawaii. Side dishes include poke (a raw tuna dish), lomi (a tomato and salmon salad), poi (a purplish pudding made from taro roots), and haupia (coconut pudding).

Leonard, who danced competitively for eight years in her hometown of Hilo, will perform, along with others, at the luau.

“Old-style hula—kahiko—is a war dance,” she says. “Most of us will be doing the more contemporary hula, called ‘auana,’ to softer music. It’s what you think of when you think of skirts and hips swaying.” Hokupa’a performers will wear shirts or dresses with Hawaiian prints.

Luau is the major event hosted each year by the club, which was established in 1996 to ease the transition of life for students arriving from Hawaii and to educate the Dartmouth community about Hawaiian culture.

“You can sometimes feel like an international student,” says Maeshiro, “yet you are part of American culture. Having the same amount of visibility that other minority groups on campus get is very important, because our numbers are small.”

Small, but growing. “When I first came here, there was one senior from Hawaii, but now there are a dozen,” says Leonard. “The club has expanded from just a few people to 45. And our language is now recognized by the College. I satisfied the language requirement by speaking Hawaiian.”

According to Raymond Helm, associate director of Dartmouth’s Office of Institutional Research, there has been an uptick in the number of students who describe their ethnicity as “Native Hawaiian or Other Pacific Islander,” from three in 2012 to 10 in 2018. And those numbers may not tell the whole story, he says, because they don’t account for Hawaiian students who also identify as Hispanic or Latino or multi-race.

“I think more and more students from Hawaii are choosing Dartmouth because graduates are going back home and talking about it,” says Maeshiro. She says the Upper Valley’s natural setting—despite the cold—is a big draw.

Leonard thinks the size of the College is also attractive. “Dartmouth has a homey feel, and in Hawaii, family is everything,” she says. “It may sound corny, but that ‘aloha’ spirit is a thing,” she says. “The luau is all about everybody coming together in one place and enjoying the moment.”