The designer of the September 11 Memorial spoke at the Hop’s arts awards ceremony. 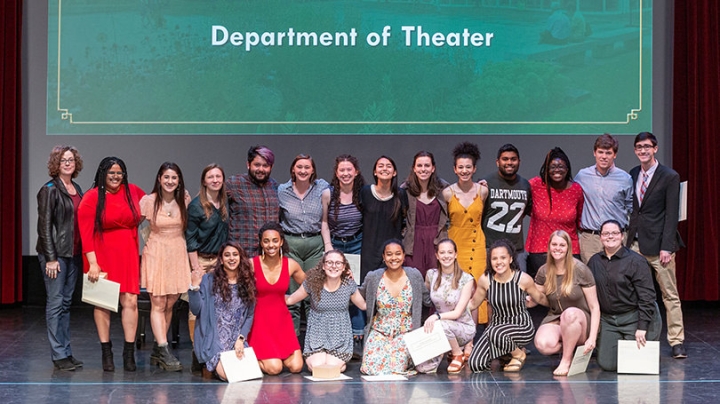 Winners of awards for excellence in theater gather on stage at Spaulding Auditorium. (Photo by Rob Strong ’04)
5/23/2019
Body

“This is my love letter to the Hop,” said Michael Arad ’91, the architect who designed the National September 11 Memorial at the World Trade Center site, of his keynote speech at the Hopkins Center’s “The Arts at Dartmouth Awards Ceremony” in Spaulding Auditorium on Tuesday.

Arad’s design for the memorial, titled “Reflecting Absence,” was selected by the Lower Manhattan Development Corporation from more than 5,000 entries submitted in an international competition held in 2003. In 2017 he was chosen to design a memorial to the victims of the 2015 massacre at the Mother Emanuel AME Church in Charleston, S.C.

“My success in this field is rooted in the gentle teachings of the arts programs and the student workshops and the cultural offerings I was exposed to in this building,” Arad said at the Hop. “This building and the people who bring it to life every day built me. What arts do at Dartmouth is life-changing.”

President Philip J. Hanlon ’77 told the student winners that they have “not only engaged but excelled in all that the arts have to offer. Your talents enrich our campus in ways that are deeply meaningful and make Dartmouth a very special place for all of us.”

And, Hanlon said, the College arts district will become even more special in years to come.

“With the dynamic renovation of the Hood Museum now complete, to rave reviews, we are turning our attention to an equally exciting renewal and expansion of the Hop,” he said. “When our transformation of the Hop is complete, the arts district at Dartmouth will be a magnet for creative and social engagement, a place that ignites campus-wide creativity, opening up new opportunities for integrating the arts into the entire curriculum.”

Provost Joseph Helble spoke about some of that cross-disciplinary creativity that’s already happening at Thayer School of Engineering, where he was dean for more than 13 years.

“In my time at Dartmouth I’ve encountered the former chair of the studio art department in the makers’ space in the machine shop at Thayer, working on a collaborative project. I’ve seen faculty collaborate on a course teaching the science and engineering of music,” Helble said.

More than 80 awards were given in music, theater, film and media studies, dance, studio art, and arts administration.

Two awards were surprises, announced at the ceremony. The Clifford S. Gurdin Prize, named for a member of the Class of 1964 who drowned in a canoeing accident in 1963, acknowledges the best student director in a Department of Theater production. It went to Kelleen Moriarty ’19, a double major in theater and English modified with women, gender, and sexuality studies. Moriarty has directed five productions in the department, including her honors project, The Glass Menagerie.

The Sudler Prize in the Arts, endowed by the late Louis Sudler, an attorney from Chicago, and awarded by agreement with Samuel Rosenthal to a Marcus Heiman-Martin R. Rosenthal ’56 Achievement Award winner, recognizes excellence in the creative or performing arts. This year President Hanlon presented it to Nelly X. Mendoza-Mendoza ’19. Majoring in economics and minoring in human-centered design, Mendoza-Mendoza has worked for the past four years as a student teaching assistant at the Donald Claflin Jewelry Studio.

As always, the ceremony featured live performances, opening with Mobesx: what I like, by Darryl Mobley ’19. A theater major, film studies minor, and football player, Mobley performed the rap lyrics on stage in front of a screen showing the music video he created with the support of  Buddy Teevens ’79, the Robert L. Blackman Head Football Coach.

Caitlin McGrail ’20 and Soomin Kim ’20 sang, to Elizabeth Borowsky’s piano accompaniment, Barcarolle, from Tales of Hoffman, by Jacques Offenbach. Kim, who is majoring in quantitative social science and music, won the Macdonald-Smith Prize for high achievement in musical performances. 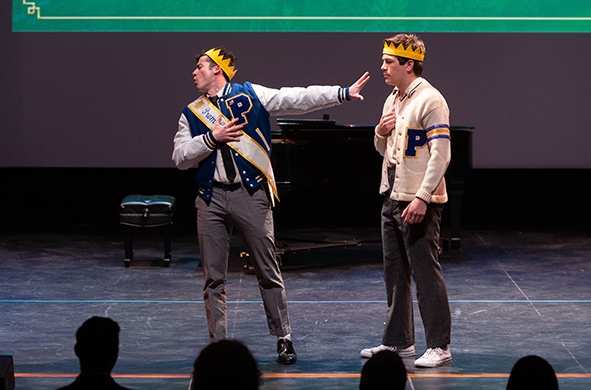 Zachary Gottchall ’20 (left) and Malcolm Young ’19 perform “Agony” from “Into the Woods” at the Hopkins Center’s “The Arts at Dartmouth Awards Ceremony” in Spaulding Auditorium.
The comical closer was Agony, a duet from Into the Woods, the Department of Theater’s Winter 2019 mainstage production. Agony was performed by Zachary Gottschall ’20 and Malcolm Joung ’19.

Another leading actor from that production, Owen O’Leary ’19, won the Mark L. Lebowitz 1977 Memorial Prize in the Performing Arts for Theater. Next year, he’ll try to launch a professional acting career, he says.

“I’ll move to New York and start auditioning for things, and see how it goes,” he said at the reception in the Jaffe-Friede Gallery following the ceremony.

O’Leary says he’s grateful for the jumpstart he got, performing professionally at Northern Stage, in White River Junction, Vt., which has a partnership with Dartmouth’s Department of Theater