The associate professor of German studies is writing a book on Thomas Mann’s mother. 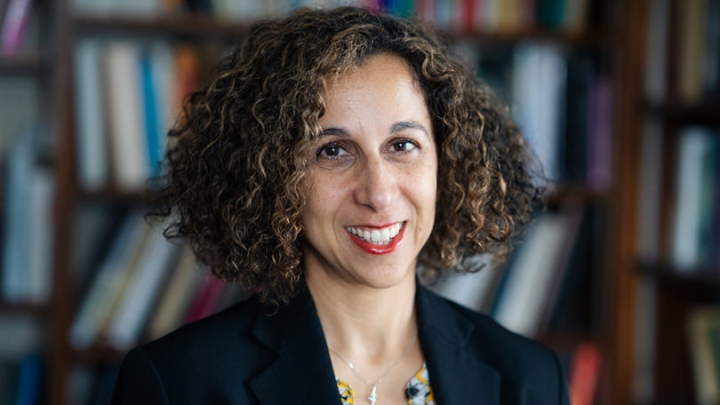 Associate Professor Veronika Fuechtner plans to use her Berlin Prize to complete a book project. (Photo by Eli Burakian ’00)
5/09/2019
Body

Associate Professor of German Studies Veronika Fuechtner has been awarded a Berlin Prize by the American Academy in Berlin.

The prestigious prize, given annually to a select cohort of scholars and artists from the United States, includes a four-month-long residential fellowship at American Academy’s Hans Arnhold Center, located in Berlin’s Wannsee district. Fuechtner will be a fellow from late January through late May 2020.

She plans to use the time to complete her next book, which explores the life of Thomas Mann’s Brazilian-born mother, Júlia da Silva Bruhns Mann—the daughter of a German plantation owner and a Brazilian woman with indigenous heritage—and the influence this heritage had on one of Germany’s most beloved literary figures.

“I’ve had this project on my radar for a long time,” says Fuechtner, whose own family has both German and Brazilian roots. “Thomas Mann is a writer who defined Germanness in the 20th century like no other writer—very self-consciously so. He even said, ‘Where I am is Germany,’ when he went in exile from the fascists. I think it’s interesting that he’s the son of someone who was not German—who had to become German.”

She believes her project may change the way some people in Germany see Mann. “Thomas Mann is an icon, like Wagner, and you have a lot of people with very conservative sensibilities who connect with Mann. So reading Mann as someone who’s connected to issues of race, to migration, and so on, is a very different take, and it’s potentially controversial. It’s exciting, but I wonder how it’s going to be received.”

In her previous work, Fuechtner, who is chair of the Department of German Studies, has explored early-20th-century German ideas, including psychoanalysis, the science of sexuality, and the history of the Weimar Republic.

“I’m an early-20th-century person,” she says. “I started out very Germany-focused, and through the course of my career I’ve broadened. I’m doing now what I like to call global German studies—thinking about the traffic of German culture and ideas in the early 20th century throughout the world.”

Mann, the author of The Magic Mountain, Death in Venice, and Joseph and His Brothers, among other books, won the Nobel Prize in literature in 1929. When the Nazis came to power in Germany, in 1933, he went into exile, first in Switzerland and later in California. He ultimately became a U.S. citizen.

Júlia Mann’s memoirs were published posthumously in the 1950s, but despite this, the history of his mother’s side of the family is not widely known, Fuechtner says.

“Júlia Mann grew up in Brazil and came to Lubeck, in Northern Germany, at age 7, not speaking any German, and being culturally Brazilian. Because my mother is Brazilian and my father is German, I always knew of this story, and I was always puzzled why this doesn’t factor into the way Mann is perceived and read. And so I started thinking what that means.”

To date, research for the project has included travel to archives in Switzerland and Germany, as well as two trips to Brazil to visit the coffee plantation where Júlia Mann was born and archives where she found records of the enslaved people who cared for Júlia as a child.

Fuechtner says she is grateful to Dartmouth for encouraging her research on this project and others.

At Dartmouth, she’s brought her research interests into the classroom. “I love teaching here. The students are fantastic,” she says. “I’ve been able to teach classes that connect to my research and I’ve been able to work with students on my research. My projects have benefited from the student input, and it’s wonderful to have the caliber of students who really get what you’re doing and become really invested in it.”

In the fall, Fuechtner will be hosting on campus a conference on Thomas Mann that will feature Mann’s grandson, psychologist and author Frido Mann, who will be at Dartmouth as a Montgomery Fellow for a week during the fall term.

Fuechtner, who grew up near Frankfurt, Germany, says she’s looking forward to being back in Berlin, a city where she has deep roots.

“I feel very connected to the city. I moved to Berlin to study in 1990, right after the Wall came down,” she says. “As an academic, I’ve had a variety of fellowships where I’ve returned as a grad student, as an assistant professor, and now we have a Berlin foreign study program to take students to Berlin for a term. I’ve seen how the city has transformed. So it’s going to be exciting to be back for a longer period.”

She is also looking forward to engaging with other Berlin Prize winners, as well as with the public in Berlin. “The whole idea of the fellowship is that you are connected to the public, and that attracted me,” she says. “Thomas Mann is a figure who is central to German culture, so my project connects to a lot of readers, academic or not.”