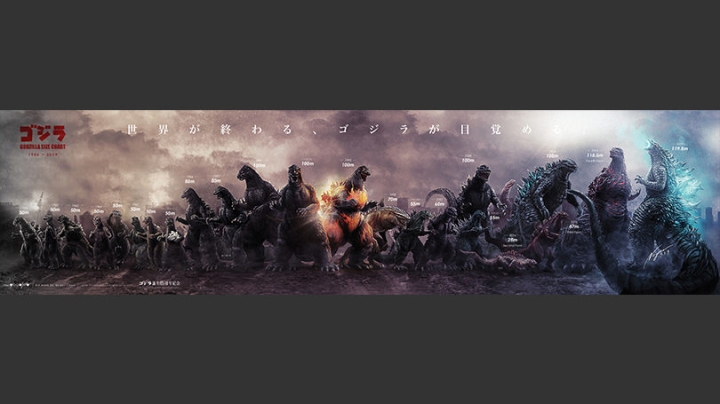 The outsized hero of Godzilla: King of the Monsters makes his 35th appearance on the big screen when the latest movie in the long-running series opens nationwide today. And it’s by far his biggest appearance.

In fact, say two Dartmouth scientists whose research into the life and times of the creature appears this week in the journal Science, Godzilla has doubled in size since 1954, the year the series began.

Godzilla’s “evolutionary biology,” write Nathaniel Dominy, the Charles Hansen Professor of Anthropology, and Ryan Calsbeek, an associate professor of biological sciences, is a “topic of enduring interest among devotees, with numerous fan pages and forums dedicated to the subject.”

So why not an academic paper?

“All of this is silly conjecture, of course—Godzilla is a commercial enterprise, and the films are responding to market forces,” they write. “Yet still we wondered, what agent of natural selection could act so swiftly and at such high intensity?”

At its inception, Godzilla was a 50-meter tall metaphor for indiscriminate destruction, particularly U.S. hydrogen-bomb testing in the Marshall Islands, which, in the film, destroyed the creature’s deep-sea ecosystem. Sixty-five years, the creature is now 119.8 meters tall, battling it out for supremacy against three other kaiju, or monsters from Japanese cinema. At stake? The future of humanity.

Film critics and fans have long observed that Godzilla has been getting larger over time, as buildings become taller. In fact, Godzilla has evolved 30 times faster than any organism on Earth, far surpassing the rate of evolution observed in 2,500 natural organisms today. “Godzilla’s body was consistent for some 150 million years until 1954, suggesting a sudden and strong selective pressure on body size during the past 65 years,” write Dominy and Calsbeek.

In 1965, the writer Susan Sontag “asserted that a great enough disaster cancels all enmities and calls for collective action in the service of self-preservation,” Dominy and Calsbeek write. “Indeed, Godzilla’s near invincibility almost always eventually leads humanity to the realization that they must work together to defeat it (except, of course, when the creature becomes an unlikely ally, but that is another story). The monster is thus more than a metaphor; it is a fable with a lesson for our times.”