Valentine’s Day: What to Watch? Dartmouth Pros Weigh In 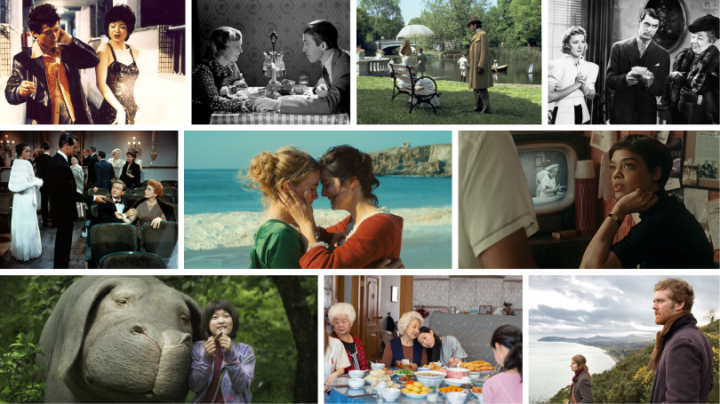 Among the recommendations are, from left to right, top row: The Hole, The Shop Around the Corner, The Age of Innocence, The Awful Truth; middle row: An Affair to Remember, Portrait of a Lady on Fire, Sylvie’s Love; and bottom row: Okja, The Farewell, Once.
2/10/2021
Body

If ever people were longing for entertainment, now is the time. So, with Valentine’s Day approaching, we asked faculty and staff experts about their favorite romantic films. Their picks range from sweet to tragic, and span the globe, several genres, and eight decades.

Mary Desjardins, a professor in the Department of Film and Media Studies, says Valentine’s Day and movies are a good combination.

“The history of film is full of representations of different kinds of love, so it seems like a natural experience to have,” says Desjardins, whose areas of teaching specialty include gender and the media, feminist filmmaking, and melodrama, among others. And, she added, “I also recommend eating chocolate.”

For her list, Desjardins reached back to The Awful Truth, from 1937, and to The Shop Around the Corner, from 1940. The films that “exemplify why old Hollywood popularized the romantic comedy,” says Desjardins, whose books include Recycled Stars: Female Stardom in the Age of Television and Video.

Several movie musicals also made the combined list, including The Umbrellas of Cherbourg, a French film from 1964 recommended by Desirée Garcia, an associate professor of Latin American, Latino, and Caribbean Studies.

Umbrellas “has a beauty in the simplicity of the story,” and in terms of the costumes, sets, and cinematography, says Garcia, who also is affiliated with the Department of Film and Media Studies. “And it’s just heart wrenching.”

Since the 1960s, musicals with bittersweet or tragic endings have become much more prevalent, says Garcia, author of The Migration of Musical Film: From Ethnic Margins to American Mainstream, and The Movie Musical. The shift reflects an acknowledgement that singing and dancing can still be expressive forms for romance and love, “but that romance and that love doesn’t always get to have the happy ending.”

Among the most recent titles is Monsoon, a 2019 love story set in Vietnam. Recommended by Sydney Stowe, director of film at the Hopkins Center for the Arts, it will be available on demand from Feb. 11-17 through the Hop.

Here is the complete list of recommendations, from oldest to newest:

The Awful Truth, 1937: “A divorced couple’s hilarious path to getting back together,” says Desjardins.

The Shop Around the Corner, 1940: Desjardins calls this film “the quintessential comedy of the couple who hate each other on first meeting, unaware that they are actually pen pal crushes.”

I Know Where I’m Going! 1947: “Detained by weather on the way to meet her fiancé in the Scottish Highlands, a headstrong young woman unexpectedly meets her match,” Stowe says.

An Affair to Remember, 1957: In this Cary Grant-Deborah Kerr tear-jerker romance, lovers planning to meet at the top of the Empire State building is a major plot point, says Desjardins. The film is watched, and relived, by the characters in Nora Ephron’s Sleepless in Seattle, but An Affair “deserves to be watched before (and more often) than Sleepless.”

The Umbrellas of Cherbourg, 1964: A boy-meets-girl kind of story that ends really tragically, the musical is “one of the most romantic movies of all time,” says Garcia. “It’s surprising how heart wrenching a story can be when it’s so simple.”

Strictly Ballroom, 1992: The musical by Baz Luhrmann is “just delightful,” says Garcia. “I think it’s one of his best films.”

The Age of Innocence, 1993: The Martin Scorsese film based on Edith Wharton’s novel ends on a bittersweet note, says Garcia. “It’s one of my favorites.”

Much Ado About Nothing, 1993: “Kenneth Branagh and Emma Thompson (a real-life couple at the time) trade barbs and glances as cynical wits in Shakespeare’s winning comedy,” says Stowe.

French Kiss, 1995: “This unsung gem is a funny and winning vehicle for opposites Meg Ryan and Kevin Kline,” Stowe says.

The Horseman on the Roof, 1995: “This wonderful French film set in the 19th century is a love story between an Italian rebel fleeing the police who aids a French noblewoman in her search for her husband during a cholera epidemic,” Desjardins says. “Juliette Binoche and Olivier Martinez are at peak smolder in one of the best film love stories set against the backdrop of a pandemic.”

The Hole, 1998: After a plague descends on Taipei, the main characters—a man and a woman—are among the few remaining residents in the city. The film follows them as they try to exist in the plague-ridden city, and eventually find a kind of community with each other, Garcia says. The musical is “very fitting for our times.”

You’ve Got Mail, 1998: Nora Ephron’s charming remake of The Shop Around the Corner “is a better film than Ephron’s more famous Sleepless in Seattle, in which the lovers are only together for the last 10 minutes of the story,” says Desjardins.

Billy’s Hollywood Screen Kiss, 1999: “Before Sean Hayes became famous as a cast member of Will and Grace, he played a gay professional photographer who has an unrequited love for a straight man in this sweet comedy,” Desjardins says.

Love Actually, 2003: “Interlocking stories of love and loss with an epic ensemble cast,” Stowe says. “It follows four love stories ranging from a sweet tween to the newly minted prime minster of England.”

Once, 2007: Set in Dublin, this “very indie musical” is a simple but nuanced boy-meets-girl story, in which the music is crucial to the way the characters come together, Garcia says. It “leaves you kind of with a rock in your stomach, but you’re also happy at the same time. ”

A Fantastic Woman, 2017: “A stunning film about a transgender woman mourning the sudden death of her older lover,” Desjardins says.

Okja, 2017: “A young girl’s love for her giant pig and what she is willing to do to rescue it from the plots of an evil multinational corporation,” Desjardins says.

Monsoon, 2019: “In a search for belonging, an ex-pat finds a new romantic possibility in this lush and atmospheric love story,” says Stowe.

Olympic Dreams, 2019: In this “lovely little film,” two people meet in a foreign space and cling to one another “because they are the only other familiar thing in that foreign space,” Garcia says. The first feature film to be shot in an Olympic Village, it was co-written by director Jeremy Teicher ’10, Alexi Pappas ’12, and Nick Kroll. Pappas and Kroll also star in the film.

Portrait of a Lady on Fire, 2019: In one of the most acclaimed films of 2019, a painter in 19th-century France falls in love with her portrait subject, a young woman reluctant to enter an arranged marriage, Desjardins says. Stowe, who also recommended Portrait, calls it a “ravishing period romance.”

The Farewell, 2019: A film “about a young woman’s love for her terminally ill grandmother and the complex charade the family puts on to hide the truth about her diagnosis,” Desjardins says.

Sylvie’s Love, 2020: “A charming story of cross-decades love between an ambitious young woman and a jazz musician that starts in a Harlem record store in the late 1950s,” Desjardins says.