The former secretary of state will be on campus May 8 and will speak at Spaulding Auditorium.

Hillary Rodham Clinton, former secretary of state, first lady, and 2016 Democratic nominee for president, is coming to Dartmouth on May 8 to speak at this year’s Obenshain Family Great Issues Lecture, an annual event of the John Sloan Dickey Center for International Understanding, and to meet with students of foreign policy.

Clinton is visiting campus at the invitation of Jake Sullivan, a former foreign policy adviser in the Obama administration, and Daniel Benjamin, Norman E. McCulloch Jr. Director of the Dickey Center. Sullivan is currently the Magro Family Distinguished Visitor in International Affairs at the Dickey Center and was a Montgomery Fellow during the winter term.

“In both American politics and in American foreign policy, Hillary Clinton has been one of the pivotal figures of our time. Working for her at the State Department was one of the greatest experiences of my life, and I’m thrilled that Dartmouth students will get an opportunity to experience her in person,” says Benjamin.

Benjamin and Sullivan both worked closely with then Secretary of State Clinton—Benjamin as State Department coordinator for counterterrorism and Sullivan as her deputy chief of staff and later as director of policy planning at State. Benjamin says Clinton’s visit, as well as Sullivan’s residency, illustrates the level of access to high-profile visitors afforded to students at Dartmouth.

The public event, “In Conversation with Hillary Rodham Clinton, Daniel Benjamin and Jake Sullivan,” runs from 4:45 to 6 p.m. in Spaulding Auditorium at the Hopkins Center for the Arts and is co-sponsored by the Montgomery Fellows Program.

Students, faculty, and staff with Dartmouth IDs will have first access to the event, and the general public will be admitted on a first-come, first-served basis, if seats remain. All attendees will pass through a security check. No bags will be allowed in Spaulding Auditorium. There will be an overflow room for people who are not able to get into the auditorium.

While on campus, Clinton will also meet privately with the Dickey Center’s War and Peace Fellows and will discuss foreign policy with students in Sullivan and Benjamin’s international issues seminars, as well as meet with Dartmouth leadership and faculty. 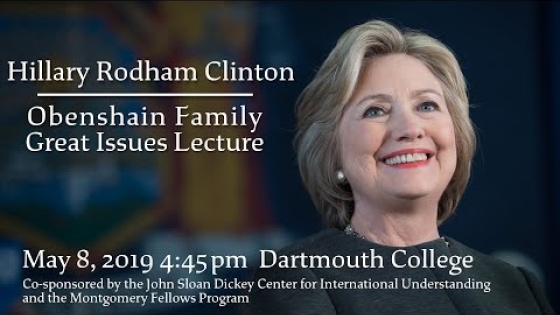 Remote video URL
Watch the conversation live, starting at 4:45 p.m. on May 8.
Written by
Bill Platt
Share this
FacebookTwitterEmail
Articles