The government professor is a leading scholar of democratic institutions and electoral politics. 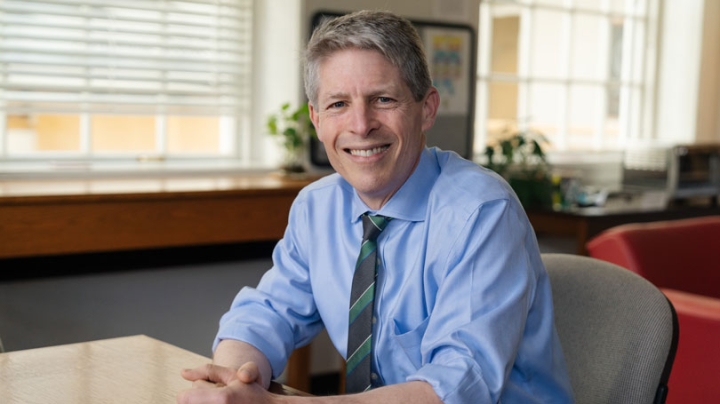 “As an associate dean, I will be working with people in sociology, geography, and history—all the social sciences. That’s really inspiring and exciting,” says Professor John Carey. (Photo by Eli Burakian ’00)
5/21/2019
Body

John Carey, the John Wentworth Professor in the Social Sciences, will be the next associate dean of social sciences, Dean of the Faculty of Arts and Sciences Elizabeth Smith has announced.

“John’s work on constitutions, representation, and electoral politics in the Americas, as well as his more recent work investigating attitudes of students and faculty on issues of campus diversity, has significantly contributed not only to political science scholarship, but to the vital discussion on supporting and strengthening our academic and democratic institutions,” says Smith, the Paul M. Dauten Jr. Professor of Biological Sciences.

Carey steps into his new role on July 1, succeeding Jay Hull, the Dartmouth Professor of Psychological and Brain Sciences, at the conclusion of his regular term.

“We are grateful to Professor Jay Hull for his excellent service as associate dean,” says Smith.

“The central mission of the faculty deans is to recruit, retain, and support the best faculty we can. I’m going to try to advance that mission,” says Carey. “Also, as is evident from my recent research into attitudes around campus climate, I am committed to the idea that we should be trying to diversify our faculty. To the extent that I can advance that cause, I want to do it—but the top priority is to get the best people who fit the Dartmouth teacher-scholar model and keep them here.”

Smith also announced that Barbara Will, the A. and R. Newbury Professor of English, will extend her term as associate dean of arts and humanities by one year.

“I am delighted that Barbara is continuing in her role as associate dean for an additional year,” says Smith. “In addition to her regular duties, Barbara is instrumental in planning the Dartmouth Hall restoration project.”

Carey says he will be looking to Will, as well as to Dan Rockmore, associate dean of the sciences, and Dennis Washburn, associate dean for international studies and interdisciplinary programs, for guidance and support as he begins in his new role. The associate dean terms of Rockmore, the William H. Neukom 1964 Distinguished Professor of Computational Science, and Washburn, the Burlington Northern Foundation Professor in Asian Studies, will end in 2021.

“I’ll be the only rookie on the roster, and I know I’ll lean on them and their experience. I think it’s good to have this sort of staggered rotation, so you don’t have everybody learning the job at the same time.”

As associate dean of social sciences, Carey says he is looking forward to becoming more familiar with the groundbreaking academic work being done by faculty outside of political science, something he has been exposed to in serving on the faculty tenure committee.

“Serving on that committee meant I was reading people’s work from all these other disciplines. Often, I’d be sitting here thinking, holy cow, 200 yards from my office in Silsby Hall, this is going on. That’s mind-blowing research,” Carey says. “Now, as an associate dean, I will be working with people in sociology, geography, and history—all the social sciences. That’s really inspiring and exciting.”

With a bachelor’s degree from Harvard University and a PhD in political science from the University of California, San Diego, Carey arrived at Dartmouth in 2003, having taught at the Universidad Católica de Chile, Washington University in St. Louis, and Harvard, among other institutions. His work focuses on the study of constitutions, legislatures, elections, and Latin American politics, and he has consulted on electoral system design in Afghanistan, Israel, Jordan, South Sudan, Tunisia, Yemen, and Nepal.

Chair of the Department of Government from 2009 to 2015, Carey serves on the steering committee of Dartmouth’s program in Quantitative Social Science, and in 2012 was elected to the American Academy of Arts and Sciences. In 2017, he cofounded—with then-Dartmouth Government Professor Brendan Nyhan, the University of Rochester’s Gretchen Helmke, and the University of Chicago’s Susan Stokes—of Bright Line Watch, which conducts surveys on democratic performance in the United States and elsewhere in an effort to monitor possible erosion in the quality of democracy.

Carey has published six books, including Presidents and Assemblies: Constitutional Design and Electoral Dynamics (1992), winner of the American Political Science Association’s George H. Hallet Award for its “lasting contribution to the study of representation and elections.” His latest, Campus Diversity: The Hidden Consensus, is due out later this year, in collaboration with two Dartmouth colleagues, Professor Yusaku Horiuchi and Katherine Clayton ’18.