The Dartmouth Symphony Orchestra will perform the piece on NPR’s "From the Top.” 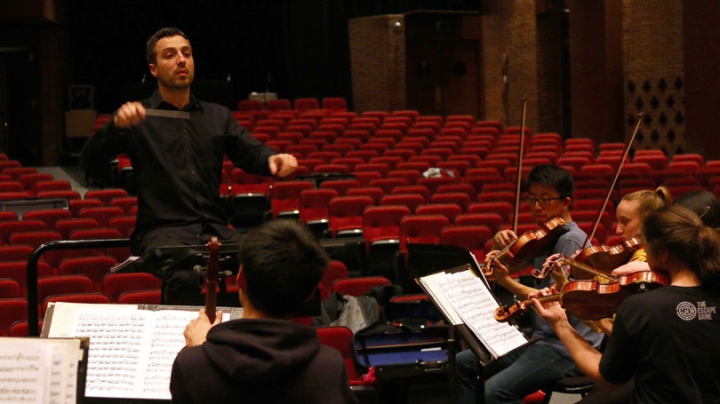 Music director Filippo Ciabatti leads the DSO in a rehearsal for a May 25 concert featuring the world premiere of “The Epic of American Civilization, a Tone Poem for Cello and Orchestra.” (Photo by Herb Swanson)
5/20/2019
Body

For more than 80 years, art lovers have flocked to José Clemente Orozco’s monumental mural cycle, “The Epic of American Civilization,” at Dartmouth Library’s Baker-Berry Library. Now the Mexican artist’s famous narrative of the Americas has inspired a work of orchestral music, commissioned by the Dartmouth Symphony Orchestra to commemorate the College’s 250th anniversary.

A cello concerto based on the mural will have its world premiere May 25 at the Hopkins Center for the Arts. It will be performed by the DSO in collaboration with the National Public Radio program, From the Top, which will record the concert for broadcast in the fall. From the Top is a showcase for gifted young musicians from around the country with millions of listeners on the radio, online, and at live events.

Echoing the title of the mural, California-based musician Noah Luna composed “The Epic of American Civilization, a Tone Poem for Cello and Orchestra,” with financial support from Roger Arvid Anderson ’68. Cellist Gabriel Cabezas, an alumnus of From the Top, will be guest soloist.

“Given the connection to Orozco’s work, it’s wonderful that the composer and the performer both have Latin American heritage,” says DSO Music Director Filippo Ciabatti. “In a way, the music is a lens on a work of art that still speaks to us in our time. It carries a message, and that message is identity. Who are we as Americans, and where do we want our society to go—into a future of exclusion and segregation, or a future of inclusion and brotherhood?”

Anderson, a San-Francisco-based sculptor, writer, and arts patron, says all the music commissions he spearheads share an aesthetic purpose. “My agenda is to return melody to the concert repertoire,” he says. “And you know what else excites me? Talent. I love to help talent. People have helped me, and I want to give back.”

In 2015, Anderson commissioned “Metropolis Concerto for Violin and Wind Ensemble,” by Richard Marriott, for the Dartmouth College Wind Ensemble.

When he was growing up in Minnesota, Anderson says, he rarely heard live classical music, but that changed when he came to Dartmouth.  “A habit started at the Hop has followed me for a lifetime,” he says. “It’s coming full circle now, since I first saw the Orozco mural 50 years ago, and I will be coming back this month to hear Noah’s concerto pay tribute to it.”

Luna says he wants his composition to reflect Orozco’s multi-faceted vision of cultural history, from the migration of Aztecs into central Mexico to the development of industrialized society. “When you step back from the mural, what you see are bold lines cutting through each one of the panels,” he says. “I hope to represent that orchestrally, and the cello will provide that strong voice throughout the piece.”

Born in 1984, Luna has built an eclectic musical career, arranging and orchestrating for Billy Joel, Kanye West, and a number of Bollywood movies. His original music has been featured by the Berkeley Symphony, the San Francisco Chamber Orchestra, and, now, the DSO.

“I inject my life experience, my cultural heritage, and my disposition into all my work,” says Luna. “What I aim to convey clearly is my love, joy, and enthusiasm for music of all kinds. Writing ‘The Epic of American Civilization’ has allowed me to fire on all cylinders, using orchestral color to talk about history.”

“The Bartok piece fits well with our theme of inclusion and diversity because the composer wrote it in America, after fleeing his native Hungary to escape discrimination in World War II,” says Ciabatti. “It’s a challenging work. This concert, overall, is a wonderful opportunity for Dartmouth students to interact musically with people their age, or slightly younger, and also with professional adult players.”

At a rehearsal in Spaulding, Kyle Bensick ’21—a computer science major and cellist who performed Gustav Mahler’s “Symphony No. 5” with the DSO on a trip to Tuscany in December—says Ciabatti is setting high standards and putting the DSO on the music world’s map.

“It’s been an incredible year for the orchestra. I’ve learned just how much work goes into these grand productions,” says Bensick.

In addition to Anderson, support for the collaboration with From the Top comes from the Jack Kent Cooke Foundation, the Amphion Foundation, and the Aaron Copland Fund for Music. The concert will begin at 8 p.m. on Saturday, May 25, in the Hopkins Center’s Spaulding Auditorium. Tickets are still available.