Cherokee metal type, called a syllabary, is now in use at the Book Arts Workshop. 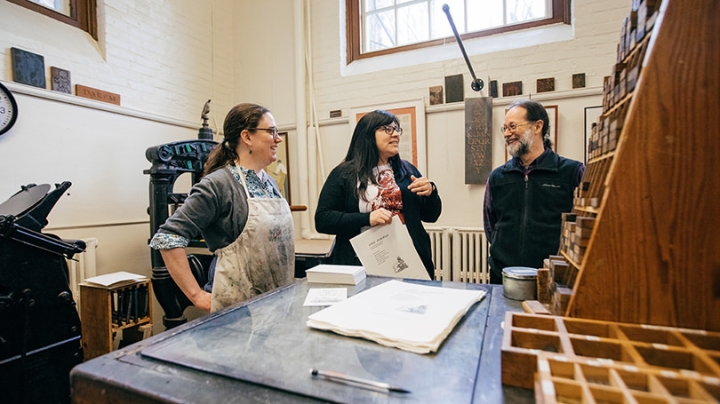 Like many indigenous languages, Cherokee is in danger of becoming extinct. But Dartmouth’s Book Arts Workshop is helping to preserve it by showing students and faculty how to create prints using recently acquired metal type in the Cherokee language. 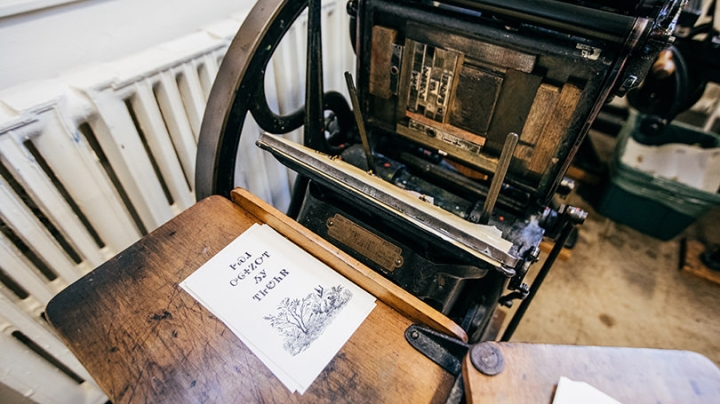 Participants started the day in the book arts studio at Dartmouth Library’s Baker-Berry Library, getting hands-on instruction in printing with the Cherokee syllabary (so-called because  the language is composed of syllables, not individual letters).

Rayher, who casts Cherokee type at his company, Swamp Press, in Northfield, Mass., offered a brief history lesson. He said the transition from an oral to a written and printed language meant that missionaries could hand out Bibles in Cherokee. But the tribe also put printing to its own uses, he said.

“In the 1820s, the Cherokees published their own newspaper, which they took to Washington, D.C., to show lawmakers that they had an advanced culture and should not be deprived of their lands.”

But lands were lost, the indigenous language was spoken and written less and less, and, Rayher says, the metal type went out of production.

Now that the syllabary is available again, vintage presses are rolling at Dartmouth.

At the workshop, Jami Powell, associate curator of Native American Art at the Hood Museum of Art, printed a Cherokee poem.

“I’m enrolled as a citizen of Osage Nation and a Cherokee descendent, but I’m not a fluent speaker,” Powell said. “Working with this type is a way for Native Americans on campus to create a connection with their communities. Having spaces where we can come together and share knowledge and talk about issues, scholarship, art, and poetry—that’s really important.”

Tehee, whose Cherokee grandparents were native speakers and whose father teaches the language, sees the syllabary as a “fantastic teaching tool,” especially for Native American Studies classes.

“To be Cherokee is to speak Cherokee,” she said at the workshop. “The syllabary is not just a bunch of symbols. They represent the ingenuity of thousands of years and thousands of Cherokee people, right up to this moment, right here in this room. By the way, you can get a Cherokee language app now on your iPhone.”

“At first, working with students, I was seeing the syllabary mostly from a design point of view,” said Smith. “It’s just so beautiful to look at. But now I want to learn a lot more about the history and the culture.”

Several classes, including “Pen and Ink Witchcraft,” taught by Colin Calloway, the John Kimball Jr. 1943 Professor of History, have visited the Book Arts Workshop this term to see and use the Cherokee type. 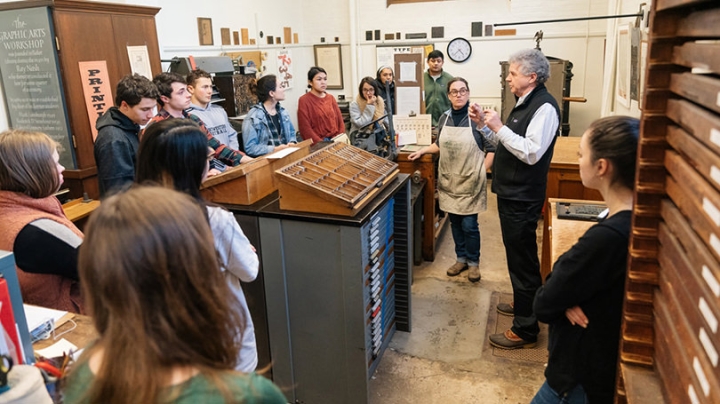 Earlier this year, Professor Colin Calloway’s “Pen and Ink Witchcraft” class learned to make prints using Cherokee type in the Book Arts Workshop. (Photo by Eli Burakian ’00)
Cherokee is not the only language that student printers are helping to preserve at Dartmouth. At the symposium’s afternoon panel discussion, Muriel Ammon ’21, Elsa Armstrong ’20, and Skyler Kuczaboski ’21 spoke about the children’s books they made in “Linguistic Revitalization,” a linguistics class taught in 2018 by Hilaria Cruz, who was then a Neukom Postdoctoral Fellow in the Program in Linguistics.

Ammon, who belongs to the Tsnungwe tribe in California, made a book for toddlers in Hupa, her native language. Armstrong and Kuczaboski created similar books to teach their native language, Ojibwe.

“This is something that we are all passionate about doing,” Armstrong said. “The things that we want to have in our own languages, we have to make ourselves.”