The May 10-11 event is dedicated to “finding purpose” in leadership and public policy. 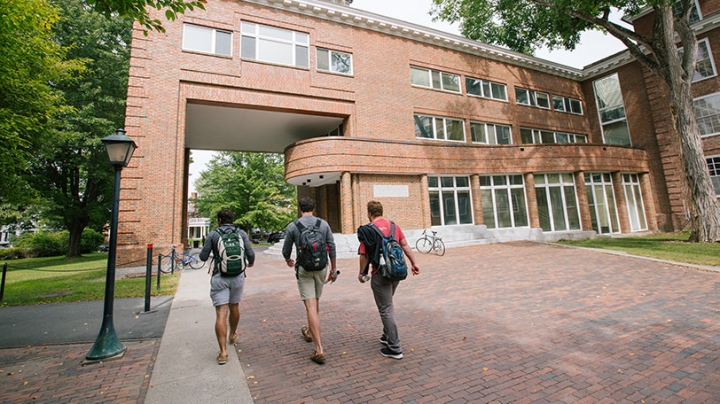 The Nelson A. Rockefeller Center for Public Policy, marking the milestones of 35 years since its founding and the 250th anniversary of the College, has put out the call for alumni to return for a May 10-11 conference titled “Finding Your Purpose: Leadership, Public Policy, What Matters and Why.”

Rockefeller Center Director Andrew Samwick, the Arthur L. Irving ’72a P’10 Professor of Economics, says the conference takes place against a backdrop of “urgent social needs that must be addressed despite the continued decline in the quality of our public discourse and governance.”

“In hosting the conference, we hope that alumni and students will better understand our policy environment and the leadership roles they can play in improving our society, in all fields of endeavor,” says Samwick, who is marking a milestone of his own: He will finish his term as the center’s director after 15 years on June 30. A search for the next director is underway.

The two-day conference will include professional-skills workshops, networking sessions, and a policy panel discussion with national security and criminal justice expert Bobby Charles ’82, who worked in the Reagan and George H.W. Bush administrations, and faith leader and political strategist Leah Daughtry ’84, who was chief of staff of the Democratic Party and CEO of the 2008 and 2016 Democratic conventions.

In addition, the weekend will feature a RockyX event with stories from the careers of eight Dartmouth alumni, including CNN political journalist Harry Enten ’11 and Teach for America leadership development director Jessica Guthrie ’10. The weekend will also offer presentations from current Rockefeller Center students and an opening night banquet with keynote speakers Samwick and Neal Katyal ’91, a former acting solicitor general, who was involved in a recent reenactment of the Dartmouth College Case before Supreme Court Chief Justice John Roberts.

“The caliber of the people coming is a testament to what Rocky has been able to produce since 1984,” says Cathy Solomon ’82, former deputy assistant to President Barack Obama and a longtime mentor with the first-year fellows program.

Through the first-year fellows, one of the center’s array of leadership development programs established under Samwick’s guidance, students go to Washington, D.C., after their first two terms at the College to intern in public policy and nonprofit agencies with Dartmouth mentors, exposing them to the reality of public service early in their career, says Solomon, who recently became a member of the center’s board of visitors.

“I think Rocky under Andrew’s leadership has demonstrated an incredible insight into public policy—that it is really a question of execution. There are lots of wonderful big ideas out there but being able to develop a policy that can be executed is another matter,” Solomon says. “That’s where the leadership development comes in, and I think that’s something that’s very different from other institutions.”

Ish McLaughlin ’88, a managing director at Citi and a member of the Rockefeller Center board of visitors, says the opportunity the conference provides for alumni at all stages of their careers to come together, network, and consider the purpose and meaning of public service exemplifies the Rockefeller Center’s mission.

“Looking at the high levels of achievement in state and local government, or corporations, or education—there’s a wide diaspora of people who have gone in lots of different directions taking what they’ve learned from Rocky out to the world,” says McLaughlin. “And there’s a good feedback loop in the sense that Rocky stays in touch with these alums. Part of the mission is to bring all this learning from outside Hanover back to Hanover so that we can continue to improve.”

McLaughlin says Samwick should take pride in the level of success demonstrated by the people who are returning to Dartmouth for the conference.

“I think Andrew has largely defined what Rocky is at Dartmouth, and perhaps more importantly, he’s provided the foundation for what it can be going forward in terms of policy, leadership, and cross-curricular learning.”

People interested in attending the conference can register online or at the welcome desk in Hinman Forum at Rockefeller Center on the opening day, Friday, May 10, between 8:30 a.m. and 4:30 p.m.