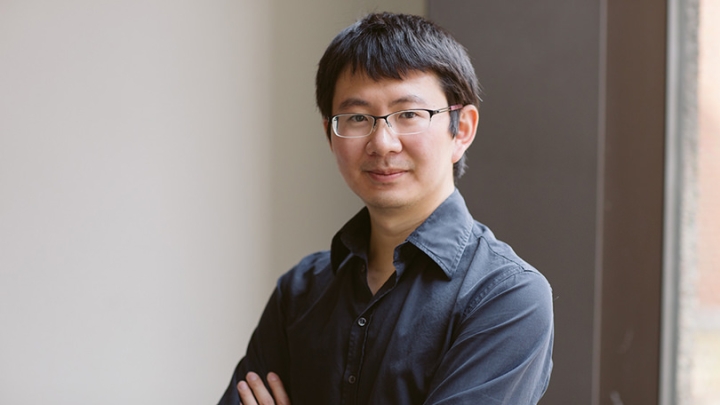 “This award is recognition of our work and allows us to keep growing our research,” says Assistant Professor of Chemistry Chenfeng Ke. (Photo by Robert Gill)
6/05/2019
Body

Assistant Professor of Chemistry Chenfeng Ke has been awarded a prestigious Beckman Young Investigator Award supporting four years of research into the creation of smart materials that could someday be used with 3D printers for human tissue regeneration and soft robotics.

“This award is recognition of our work and allows us to keep growing our research,” Ke says. “It will allow us to take this work in some high-risk, high-reward directions that might not otherwise be funded, and it will allow me to push across new boundaries.”

Provided by the Arnold and Mabel Beckman Foundation, this year’s award offers $600,000 in funding over four years to each of 10 researchers selected from a pool of more than 300 applications. The award supports early-stage faculty members whose work involves the invention of methods, instruments, and materials that open new avenues of research in science.

Ke and his team of post-docs, graduate students, and undergraduates in his Ke Functional Materials Group lab are investigating the development of smart materials that can be structured through 3D printing to allow the nano-to-macroscale assembly to mimic collagen peptides to form fibrils and then tendons.

“What we are interested in is manipulating molecules to orient themselves during the process of 3D printing. We are trying to create a scaffold for tissue regeneration which can join bones with soft tissue,” Ke says.

Another application is soft robotics. “So, for example, we hope to enable machinery motion by triggering molecules in a 3D printed material to behave in the same manner as the proteins that initiate biological muscle movement,” he says.

Founded in 1978 by 20th-century scientific instrumentation pioneer Arnold O. Beckman, the foundation supports U.S. institutions and young scientists whose creative, high-risk, and interdisciplinary research will lead to innovations and new tools and methods for scientific discovery.