Digging Dartmouth: ‘History Is Right Beneath Our Feet’

Archaeologists are excavating the ground in front of Dartmouth Library’s Baker-Berry Library. 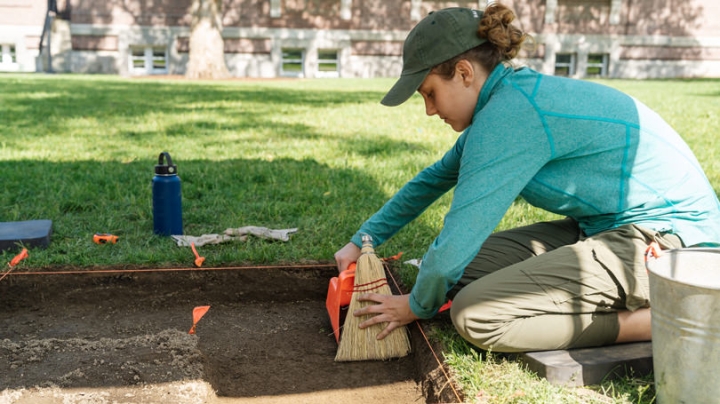 Katie Hoover ’22 helps with an excavation of the lawn in front of Dartmouth Library’s Baker-Berry Library. (Photo by Eli Burakian ’00)
6/07/2019
Body

Want to dig up some Dartmouth history?

For the next week or so, you can join a team of archaeologists excavating part of the lawn in front of Dartmouth Library’s Baker-Berry Library where, before the library was built, a pair of 18th-century houses stood. The homes were moved to make way for library construction, and their foundations have been hidden underground for centuries.

Professor of Anthropology Jesse Casana and Heather Rockwell, a postdoctoral scholar serving as the project’s field director, are supervising the excavation of one of the buildings: the Ripley-Choate House.

“The plot was deeded to Sylvanus Ripley, who was one of the first four graduates of Dartmouth in 1771. He went on to become a professor of divinity and a trustee,” says Casana.

Eventually, the Ripley House became a student residence. “Rufus Choate lived in it,” Casana says, “and he became a senator from Massachusetts, so it was renamed Choate House.” In the 1920s, to make way for the library, Casana says, Choate House was moved to North Main Street, where it is now the home of the African and African American Studies Program.

“But all the other stuff that was underground—cellars, wells—that was just covered over and is still down there.”

Over the past two years, Casana and his students have been doing geophysical surveys using ground-penetrating radar instruments. “We’ve identified four sites across campus where you might find 18th- or 19th-century stuff still intact, but this is my favorite,” says Casana.  “It’s one of the oldest and probably one of the best preserved.”

And where is the best place to look for well-preserved artifacts? Privies.

As Casana notes, there were no garbage trucks in early America, so people threw trash—food scraps, bones, broken crockery, glass, utensils—down privy holes. Or maybe, during bathroom visits, house dwellers lost valued possessions, like pocket watches or coins, but chose not to rummage around for them.

The dig gets underway on a sunny, warm morning, as students, faculty, and volunteers from the community carefully lift and roll the turf from two spots where, the mapping suggests, privies were located. In each spot, called a unit, they create a tic-tac-toe-like grid, demarcated by string.

Under Rockwell’s watchful eye, Andrada Pantelimon ’22 uses a trowel to scrape out neat corners of her square.

“I never give it a lot of thought when I walk to the library,” she says, “but in a populated area, you’re always walking on top of history.”

The square is supposed to be exactly 10 centimeters deep. “That looks great; I think you are really close,” says Rockwell, inspecting Pantelimon’s work.

Katie Hoover ’22, working next to Pantelimon, makes the unit’s first find: a piece of creamware pottery. It’s smaller than the nail of her little finger, but the glaze is a tell-tale white.

Rockwell specializes in an earlier time: the Paleoindian period, when the first peoples entered what is now America at the end of the last ice age. “This area was actually under a glacial lake, called Glacial Lake Hitchcock, which is why we have some lake bottom sediments in here,” she says. 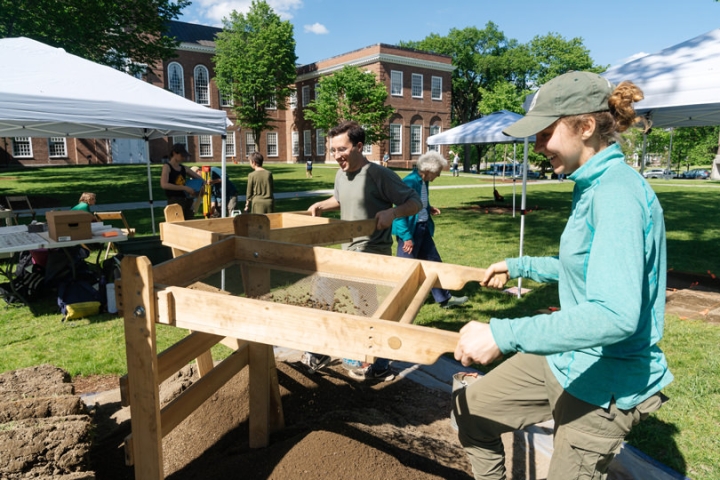 Josh Wende ’19 (left) and Katie Hoover ’22 screen soil at an archeological excavation site in front of Dartmouth Library’s Baker-Berry Library.
Using screen to sift the soil, excavators search for shards of history. Rockwell would be thrilled to find intact objects, as well.

“Complete bottles and whole pieces of pottery are always great because they help determine the age of the site,” she says. “And it’s always fun to find unique stuff, like the metal fork that was unearthed during an earlier excavation behind the library, when it was expanded about 20 years ago.

That primitive fork and pottery fragments from the previous dig are displayed in glass cases on a nearby table, along with photographs of what this part of campus looked like long before the library was built.

By the end of the first day at the Ripley-Choate site, there’s a second discovery: a small chunk of blue-patterned pottery, called transfer-printed pearlware, from the late 18th century.

“It’s really cool because it has block-printed ink on it,” says Calista Almer ’20,  who found it.

“People don’t realize it, as they play Frisbee here. But history is right beneath our feet,” says Casana. “All you have to do is know where to put that hole, and it’s like magic. We’re going to find all kinds of stuff.”

“Digging Dartmouth” team members also include Professor of Anthropology Deborah Nichols, Elisa Lauger, a graduate student in the Ecology, Evolution, Ecosystems, and Society program, and William Fitzhugh ’64, a senior scientist at the Smithsonian’s National Museum of Natural History and a visiting lecturer at Dartmouth.

The excavating continues through June 15, and volunteers can register to help.