The annual luncheon honors the contributions made by Dartmouth’s graduate students. 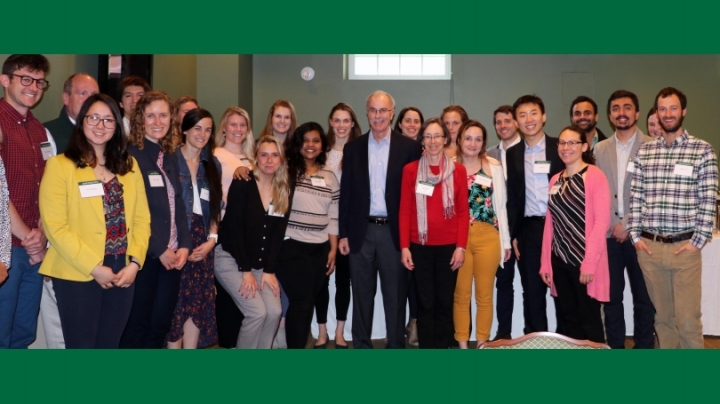 President Philip J. Hanlon ’77 and Gail Gentis, at center, invited graduate student leaders from the Guarini School to have lunch at the president’s residence. (Photo courtesy of the Guarini School of Graduate and Advanced Studies)
6/24/2019
Body

Read the full story, published by the Guarini School of Graduate and Advanced Studies.

Graduate student leaders from the Guarini School received a warm welcome last month in the home of President Philip J. Hanlon ’77 and Gail Gentes. Each year, students from the Graduate Student Council (GSC) executive board, student groups, and other leaders in the community are invited to a celebratory luncheon in recognition of the contributions graduate students make at Dartmouth. Dean F. Jon Kull ’88 and Guarini School administrators were also in attendance to convey their appreciation of the student leaders.

Since beginning his term, President Hanlon has placed great importance on the establishment of a graduate school at Dartmouth in keeping with his vision presented in 2016 to make Dartmouth “a magnet for human talent.”

Speaking to the group, Kull praised Hanlon for his ambitious goal to create a new school at Dartmouth. “In our very first meeting, President Hanlon told me, ‘We should have a freestanding graduate school,’ ” Kull said. “And thanks to his dedication and vision we have now not only a school, but a significant financial investment into its future.”