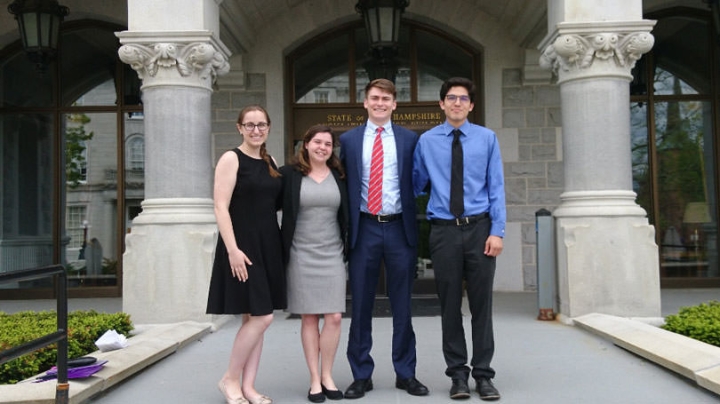 When students from the Class of 1964 Policy Research Shop (PRS) testified before the New Hampshire House Children and Family Law Committee in Concord last month, they brought the number of nonpartisan policy research reports presented by Dartmouth students to state policymakers in New Hampshire and Vermont to 200 since the program started in 2005.

Compiling the policy briefs—which present relevant legislative history, case law, social science research and other data on all sides of an issue without making any recommendations—helps undergraduates apply classroom learning to the real world of policymaking and legislation, says program creator Professor Ronald Shaiko, senior fellow and associate director of curricular programs at the Nelson A. Rockefeller Center for Public Policy, which runs the PRS.

The PRS experience is very much in demand, says Shaiko. In the 14 years since its inception, the program has attracted close to 500 students; many of them return two or three times to work on briefs even after they have received a grade in the initial Public Policy 45 class.

“The curricular side of the Rockefeller Center has a reputation for raising the bar,” says Shaiko. “So the students who are interested in having that bar raised on them, and are looking for that experiential learning element—that application to the real world—are attracted to our class, and we have found, they keep coming back to help out with new briefs.”

At the Children and Family Law Committee session in Concord on May 24, Walter Cook ’21 and Emily Minsky ’21 presented their report on a child emancipation bill to allow minors 16 years and older to gain financial and legal independence from their parents. Alexandra Norris ’19 and Wyatt Williams ’19 presented their research on a potential bill that would allow allegations of parental alienation—defined as one parent attempting to turn a child against the other parent—to be considered by a judge in divorce and other court proceedings.

In their testimony, the two groups presented highlights from their reports, which had been provided to the lawmakers in advance, and then invited questions. Several members of the committee, including Rep. Mary Jane Mulligan (D-Lebanon and Hanover) noted before questioning the students that the committee had received many letters and comments from constituents and interest groups on all sides of the two legislative proposals.

Rep. Patrick Long (D-Hillsboro), committee chair, praised the PRS students for their thorough work and their poise as they were “faced with some really tough questions,” about, for example, whether an abusive father might charge a mother with child alienation when the mother has a legitimate fear of continued abuse, or how much weight a judge in a child emancipation case should give a 16-year-old’s allegations that their parents were unfairly confiscating the teen’s income.

“It’s a breath of fresh air to have people report to us with no agenda,” Long said. “When we hear from lobbyists and special interests, we have to decipher what’s the underlying agenda and what’s the reality. So, I think these presentations offer a larger benefit to us because I can believe what they’re telling me without spin. It’s just, ‘Here’s our research, here’s what we found. Ask questions.’ ”

Cook said testifying before the committee and responding to the wide range of questions from lawmakers helps PRS students put the research in context.

“I think it was a good reminder of the importance of what we’re doing,” said Cook. “We’ve been working on this project now for about six months and looking at a lot of the individual details of statutes in each state. It’s easy to forget the larger picture. But seeing people in the room and how passionate they could be, shows me that this work really has an impact on people’s lives.”

In building relationships with state legislators and public policy leaders in New Hampshire and Vermont, Shaiko has always stressed that it is the complicated issues—such as parental alienation or child emancipation—that his students want to take on.

“That’s where the students have to figure out where that fine line is, because we don’t want to advocate for anything. That’s not our job. We have to give them all sides of the story—what are the upsides, what are the downsides,” says Shaiko. “Our value-added proposition is that we can provide more information so that the legislators can make informed judgments, and if the students can play a role in that, it is a huge benefit for everyone.”