The sociologist and house professor of South House has been serving as interim dean. 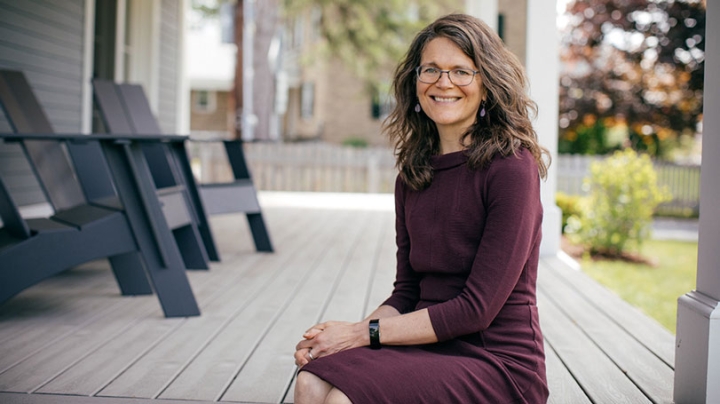 Professor Kathryn Lively has served as interim dean of the College since July 2018. (Photo by Robert Gill)
6/25/2019
Body

Professor Kathryn Lively has been named dean of the College, Provost Joseph Helble announced today. She will assume her role on July 1.

Lively, a professor of sociology and the inaugural house professor of the South House residential community, has served as interim dean since July 2018. She follows the former dean, Professor of Spanish and Comparative Literature Rebecca Biron.

“This is wonderful news for the community,” Helble says. “Over the past year, Kathryn has been an outstanding leader with a deep commitment to student well-being, and an equally deep commitment to the work of Student Affairs in supporting the learning of our students. I am confident that she will continue to have a tremendous positive impact on how Dartmouth students live and learn together.”

As Dartmouth’s senior officer responsible for undergraduate academic life, the dean of the College oversees the Student Affairs division and Dartmouth’s six house communities, and serves on the president’s and provost’s leadership teams, promoting the integration of academic life into the full range of student experiences, providing direction on student inclusivity and diversity issues, and participating in strategic planning.

“One of the things I realized as interim dean is how absolutely imperative the work of student affairs is in terms of fulfilling the broader academic mission of the College,” Lively says. “And I have never worked with a group of people who were as passionately committed to what they do as the people who work in student affairs.”

She sees her role as “an important opportunity to help create a campus culture that will facilitate the development of humans. Student affairs is about helping students develop healthy habits, friendships, and leadership capacities—all of which feeds into their success in the classroom, and, more importantly, their success as they enter the world,” she says.

Lively, whose scholarship focuses on the interaction between culture, identity, and emotion, earned her PhD in sociology from Vanderbilt University and joined the Dartmouth faculty in 2002. Her research involves various forms of emotion management and identity transformations. She has taught classes on “Self and Society,” “The Sociological Imagination,” and an upper-division class called “Love, Dating, Intimacy, and Romance.”

For most of her career, Lively has seen herself as a scholar and teacher first. But her experience as a house professor, working with students outside of the classroom to build the South House community, helped her appreciate the complexity of student life—an appreciation that her term as interim dean has only deepened, she says.

“The student experience is much more multifaceted than I ever understood as a faculty member and even as a house professor,” she says. “As a social psychologist who’s been interested in inequality, group interactions, well-being, and identity, I feel like I’m doing applied social psychology every day. It’s a lot of fun.”

Her vision is “to bring stability to the leadership of the division. That means continuing to build on the amazing legacy of Rebecca Biron in bringing the house communities into fruition,” she says, noting that the 2019-2020 academic year will be the first year all students on campus will have entered Dartmouth as members of house communities. “We’ll be working on a sort of ‘house communities 2.0’ in the next few years.”

In addition, Lively says she’s pleased that a number of recent gifts to the College through The Call to Lead: a Campaign for Dartmouth capital campaign have been earmarked for student life, including a recent $10 million gift from A. George “Skip” Battle ’66 to expand Dartmouth’s programming for first-generation and low-income students. Recent initiatives will “continue to develop the already amazing leadership programs that we have in student affairs into a more unified curriculum,” she says.

Dennis Washburn, associate dean of the faculty for interdisciplinary programs, chaired the search committee that made recommendations to Helble on the selection of the next dean. Other members of the committee included Carolyn Gordon, the Benjamin Cheney Professor in Mathematics; Laura Hercod, chief of staff in the Office of the President and secretary to the board of trustees; Dino Koff, director of financial aid; Timothy Rosenkoetter, associate professor of philosophy; Monik Walters ’19, student assembly president; Emily Walton, associate professor of sociology; and Douglas Van Citters ’99, Thayer ’03, ’06, associate professor of engineering.