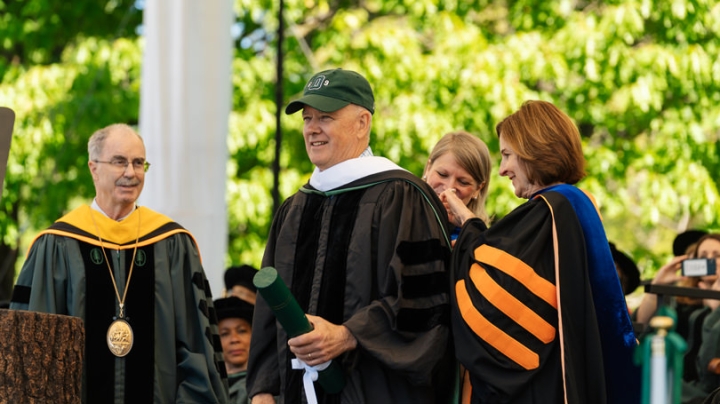 RICHARD LYNN ALDERSON, as an accomplished American baseball executive, you tossed conventional wisdom aside in favor of deep thinking and data analytics to master the art of building a successful sports franchise.

The son of an Air Force pilot, you joined the Reserve Officers’ Training Corps upon enrolling at Dartmouth, graduating as a proud member of the Class of 1969. After nobly serving our country as a Marine in Vietnam, you returned home to pursue a Harvard law degree. You began your career as an attorney at the law firm of Farella Braun & Martel. In 1981, you were named general counsel of the Oakland Athletics. Just two years later, you were promoted to general manager, leading the club to three consecutive American League pennants and the 1989 World Series title.

Always looking to learn from those around you, you continually applied new knowledge to your role as baseball executive. You were among the first to apply statistical analysis to developing a successful farm system. Your disciplined management style, respect for individual talent, and data-driven approach to decision-making proved a winning combination.

You expanded your impact internationally as an executive for Major League Baseball, orchestrating the historic goodwill games between the Baltimore Orioles and the Cuban National Team in 1999, and launching MLB academies in Australia, Italy, and the U.S.

In 2005, you returned to the front office as CEO of the San Diego Padres, helping the franchise achieve back-to-back playoff appearances for the first time in club history, before serving an eight-year stint as General Manager of the New York Mets.

For your leadership and success as a Major League Baseball general manager and your commitment to the advancement of America’s national pastime, Dartmouth is proud to Award you the honorary degree of Doctor of Humane Letters.