Winans taught public speaking at Dartmouth from 1920 to 1942. 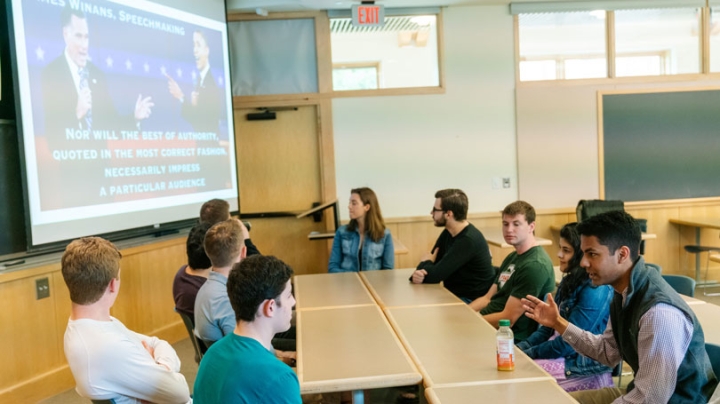 Students in a course taught by Associate Professor of Speech Joshua Compton discuss the philosophy of James Albert Winans, who taught speech at Dartmouth from 1920 to 1942. (Photo by Eli Burakian ’00)
6/20/2019
Body

A new course commemorating Dartmouth’s 250th anniversary explores the legacy of the late Professor Emeritus James Albert Winans, who taught public speaking at the College from 1920 to 1942.

Winans revolutionized the way public speaking is taught, says Associate Professor of Speech Joshua Compton, who is teaching the Speech 20 course at the Institute for Writing and Rhetoric.

“Before Winans’ time, students were typically trained to use heightened, unnatural rhetoric,” says Compton.  “These days the emphasis is less on oratorical flourish and more on speaking authentically, even conversationally, to engage listeners. And thanks in large part to Winans, public speaking has become an academic discipline based on solid research.”

In his 1938 book, Speech Making, Winans makes what Compton says was a groundbreaking argument.

“Winans says we can treat public speaking like dialogue, much as we think about conversation, where our goal isn’t to act like credible, thoughtful personae. The goal is to become them,” says Compton.

Compton says Winans brought national attention to Dartmouth’s speech curriculum, as an author, teacher, and founder of the Speech Association of America.

“See this book?” Compton asks in his office, holding up an early edition of Speech Making. “I inherited it from my mentor, who died about 10 years ago. His name was Bob Derryberry, and I was his student at the Bob R. Derryberry School of Communication Arts at Southwest Baptist University, a small school in Missouri.”

Though Compton didn’t realize it back then, Derryberry was heavily influenced by Winans. “They are both branches of my own academic family tree,” Compton says.

Compton acknowledges that intellectual lineage in a Dartmouth Alumni Magazine article, “The Book That Changed My Life.”

“For a kid with a stutter, perfect fluency was out of my reach. But a good idea, expressed with conviction and clarity, was not. Yes, I still like it when my writing sings, when I get close to eloquence. But even more satisfying are those moments when my audience understands my argument, even when it disagrees, and I understand my audience better, too. That sounds like great public speaking. That sounds a lot like dialogue. And as Winans and my mentor taught, and I now teach—those two things aren’t so different after all,” Compton writes.

For one class in late May, “Speech 20” students shared key concepts from Winans’ writings in an unusual way.

“They’ve been selecting interesting lines from Winans, pairing them up with a visual image that helps to underscore their analysis of the quotation,” Compton explained. “These aren’t formal speeches—just casual discussions of one of their favorite ‘picture quotes’ that they’ve created this term.”

For his “picture quote,” Matthew Rauner ’19 chose a photograph of NASA engineers in a control center, apparently talking together in advance of the Apollo 13 mission to the moon in 1970.

“It required a lot of expository speech,” Rauner said. “In this case there was not one person who could have gone to moon on their own.  It took a lot of talented, hard-working people, not just one person trying to persuade everyone of his or her opinion.”

The advice from Winans that Rauner chose to superimpose on the photograph is: “In taking up expository speech you should be highly motivated, but your dominant emotion should be to make your hearers understand.”

For high-quality programming, course design, and special programs, Dartmouth’s speech curriculum was recently recognized with the Rex Mix Program of Excellence Award, a prize given annually by the National Communication Association to what the NCA calls the nation’s “top small undergraduate communication program.”