Valedictory to the College by Andrew Liu ’19

Liu, one of six valedictorians in the Class of 2019, delivered the valedictory to the College at the 2019 commencement ceremony. 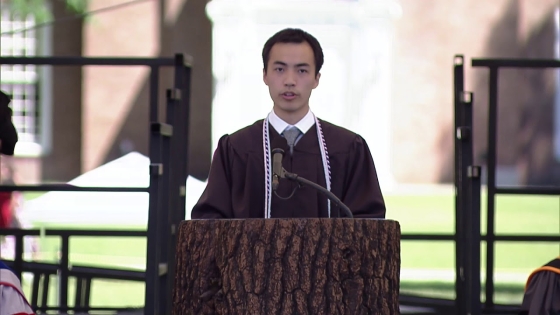 During my four years here at Dartmouth, I have always looked forward to graduating and checking “college” off of the proverbial to-do list.

I was looking forward so much to completing my undergraduate degree that I graduated early and took spring term off to relax and decompress before the inevitable plunge into adult life. I spent time with family, traveled a bit, and had some undisturbed time to practice piano. It was all that I expected, except for one thing: I realized all of the things I missed about Dartmouth.

I missed the FoCo cookies—and the more recent addition, lemongrass chicken—the view of the Big Dipper on clear nights, and the small-town charm of Hanover. And I missed professors who genuinely care about their students’ success, deep and meaningful friendships, and an environment where you really can try new things with minimal risk. It’s ironic that it is only after I’ve completed my four years here that I wish it could last longer.

In reflecting on my Dartmouth experience, I thought about all of the classes I’ve taken; the amazing professors I’ve had; and how Dartmouth has helped me learn to think critically, independently, and thoroughly. I thought about the lessons I’ve learned from my peers, who have taught me some of the most important things I know.

I’ll share one of these lessons today, not because I think it’s some magic key to success or because I’m certain it’s true, but because I’ve found it to be particularly meaningful. Actually, it would be more appropriate to call it a working hypothesis—I’m not going to pretend that I have everything figured out or any special wisdom to impart here.

The hypothesis is the following: No matter how well you think you know yourself, there is probably much more that you do not know; and you might not like the things you don’t know about yourself, should you discover them.

A while back, I was having a conversation with a close friend; and out of the blue, he told me he thought I avoided disagreement excessively. Although I admitted that I did tend to avoid disagreements, I didn’t think there was much wrong with that. Disagreements tend to lead to arguments, which can lead to more serious conflicts, so why not try to avoid disagreements?

But we went on to discuss the consequences of avoiding disagreement excessively and came to a number of revelations—like how it can cause you to suppress your own beliefs and opinions for the sake of social placation; and how, without staying true to what you believe, you deprive yourself of the chance to truly express yourself; and if you don’t show who you are, how can you possibly be authentic, genuine, and honest? I didn’t want to believe this was true, but having it presented so clearly by someone else forced me to confront the unpleasant reality.

As high achievers at a prestigious institution, we are all used to being told “good job” for nearly everything we do, so it’s tough when we are shown our flaws; however, each of these unpleasant revelations is accompanied by an opportunity for growth. I’ve found that it takes courage to face my own flaws, and that it is almost always scary and terrifying; and quite frankly, some days I just can’t bring myself to face them. But so far, as far as I can tell, when I have been able to muster up the courage to do so, it has helped me grow as a person and strengthened my sense of self.

So, if you find something you don’t like about yourself, don’t be scared; don’t lose sight of the bigger picture. I’ve met some of the most capable, genuine, thoughtful, ambitious, and kind people I’ve ever met here at Dartmouth. Remember how much you’ve already accomplished, and don’t overlook all the positive parts of yourself.

Discovering ways to improve is discovering pieces of the roadmap to becoming a better version of yourself; so when you find these precious pieces of the map, try to have the courage to embrace them and use them to guide you in becoming who you want to be. And if some days you just can’t, that’s fine; the important part is striving to do so as often as you can.

Whether you buy into the hypothesis I’ve shared today is up to you. Dartmouth has taught us how to think rigorously and independently, and you are more than capable of determining if this hypothesis is helpful to you or not. But as we take our separate paths through life and impact the world in our own unique ways, I invite you all to take some time to reflect—reflect on who you are, think about who you want to be, and then ultimately strive to become the person you want to be. 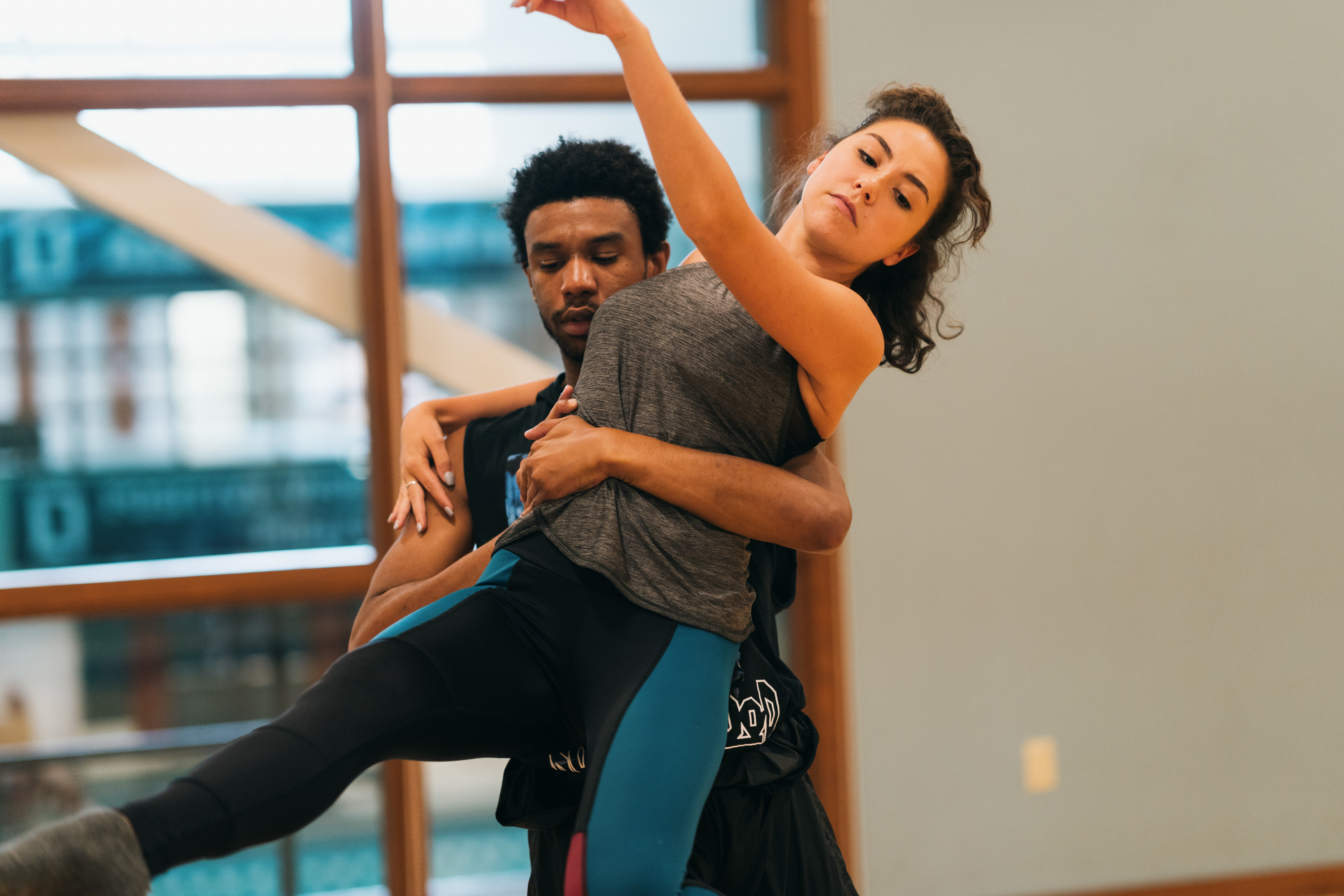