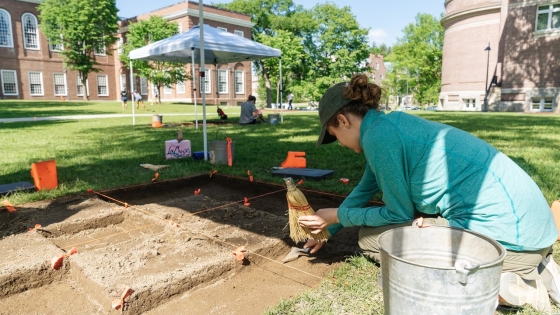 For two weeks in June, as part of Dartmouth’s 250th anniversary, a team of archaeologists and volunteers from the community dug up history on the front lawn of Dartmouth Library’s Baker-Berry Library.

Under the supervision of Professor of Anthropology Jesse Casana and field director Heather Rockwell, a postdoctoral scholar, the group used shovels, trowels, and sifters to unearth artifacts from the Ripley-Choate House, which stood on that site before it was moved to North Main Street. It is now home of African and African American Studies.

An early resident of the mansion was Rufus Choate, who later became a senator from Massachusetts. After he and his family moved out, the mansion housed students, and later, College clergy. The excavators found a treasure trove of everyday household items that had been lost or discarded down a privy hole: lots of imported china, a medicine bottle, a small pipe, a child’s plate and marbles—even a gold ring and a row of false teeth.

“This dig was every bit as good as I had hoped it would be,” said Casana. “We found a very rich layer of artifacts, and, with the help of Keira Byno ’19, we’ll start this summer cleaning, cataloging, and researching them, trying to figure out how all this stuff fits into the history of the College. We’ll do a publication, and possibly put together an exhibition later in the year.”