Andrew Samwick Reflects on Time as Head of Rockefeller Center 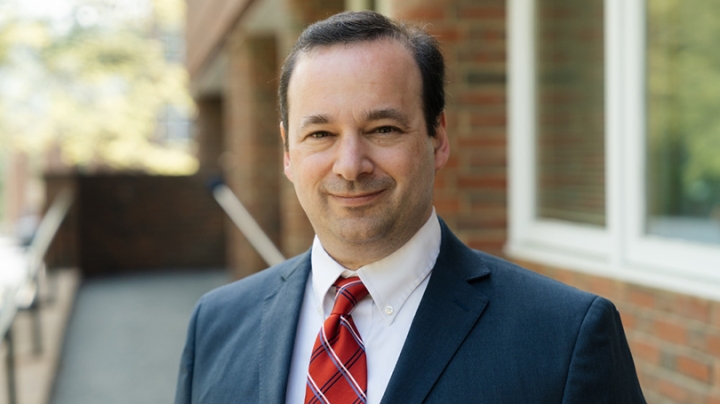 Andrew Samwick, the Sandra L. and Arthur L. Irving ’72a P’10 Professor of Economics, is returning to teaching and research after serving 15 years as director of the Nelson A. Rockefeller Center for Public Policy. (Photo by Eli Burakian ’00)
7/03/2019
Body

When asked about his guiding principle as director of the Nelson A. Rockefeller Center for Public Policy, Andrew Samwick reaches for a piece of paper stuck to the top edge of his computer screen.

“Oh, I can’t take it off, but that’s it,” he says, pointing to the note. “ ‘Educating, training, and inspiring the next generation of public policy leaders.’ And the fact that it seems to be stuck means I’m just going to leave it here for my successor.”

Samwick, the Sandra L. and Arthur L. Irving ’72a P’10 Professor of Economics, concluded his 15-year tenure as the center’s director last week. He joined the faculty in the Department of Economics in 1994 and was named director of the center in 2004. He plans to return to teaching and research. The search for the next director is underway.

Under Samwick, the Rockefeller Center has created an experiential public policy curriculum and leadership development programs that are recognized as some of the best across academia and the private sector. The center’s wide range of leadership and public policy programs have been part of many hundreds of students’ Dartmouth experience. Rocky alumni have gone on to influential careers, in government at all levels, in the nonprofit sector, and in a range of private sector areas. Many maintain their ties to the center by taking part in leadership seminars and providing internship opportunities for each new crop of undergraduates.

Last month, Samwick was presented with the Class of 1964 Outstanding Leadership Award in recognition of his time leading the center.

“You have built a terrific team at Rocky, kept that team intact for a long time, and changed the lives of hundreds of students,” reads the Class of 1964 proclamation that accompanies the award. “You have set the standard by which the College should develop broader leadership initiatives engaging all students.”

Dean of the Faculty of Arts and Sciences Elizabeth Smith says that under Samwick’s direction, the Rockefeller Center has grown in breadth.

“Andrew has guided the center’s transformation into a hugely dynamic force on campus, one that draws increasing numbers of students to its leadership programs,” she says. “The students who have taken part in these programs are well prepared to step into public policy work when they leave the College.”

Samwick recently spoke with Dartmouth News about his time leading the center and his hopes for its future.

When you came to the director’s position in 2004, what were your initial goals for the center?

Oh, that’s funny. I have a document somewhere on my computer that described my initial goals for my first meeting with the Board of Visitors, and I’ve done none of those specific things. But generally, I wanted to create a home with mentors and peers for students interested in the social sciences, broadly, and public policy in particular.

How did your ideas evolve once you arrived at Rocky?

A couple of things happened. First, I hired Sadhana Hall to oversee our student and public programs. She brought a wealth of ideas. And there was also something that was nascent at the time called the “public impact initiative,” the most notable element of which was the idea for the Policy Research Shop (now called the Class of 1964 Policy Research Shop) and the idea for civic skills training. We had received some startup funding.

Civic skills training was predicated on the idea that if it’s worth spending a large amount of money to get a student a grant for an unpaid internship in the public sector or the nonprofit sector, then it’s worth investing a little bit more money to first teach the professional skills needed to make sure that the student has the most productive possible experience in that internship.

There were some ideas floating around about how to do that, but the change we made to the initial concept was that we should do this in Washington.

The idea that it was worth having that experience for students in Washington, regardless of where their internships were, that felt like a bit of a bold move. And of course, when you do something bold like that, you learn a lot about the content, about what the students are interested in.

When I got here, there were none of the protocols for the Policy Research Shop other than that same startup funding. It was originally envisioned as something exclusively co-curricular. And we didn’t have Ron Shaiko yet. We had hired a postdoc. And again, it was just a lot of learning by doing.

Looking at the struggles of the Policy Research Shop in its first year, it dawned on me that anything that requires this much work by the students needs to be more than co-curricular. It needs to be a course.

A rough guide for me now is anything that requires you to master some external body of knowledge, that’s a course. So, the combination of bringing on Ron Shaiko as associate director of curricular and research programs to teach it, and making it a course, that was like night and day. Then Ron figured out that the key people to network with were legislative committee chairpersons in two states—Vermont and New Hampshire—and two chambers, because they’re the ones who have to move legislation through and have the authority to call you for testimony. That made it work. 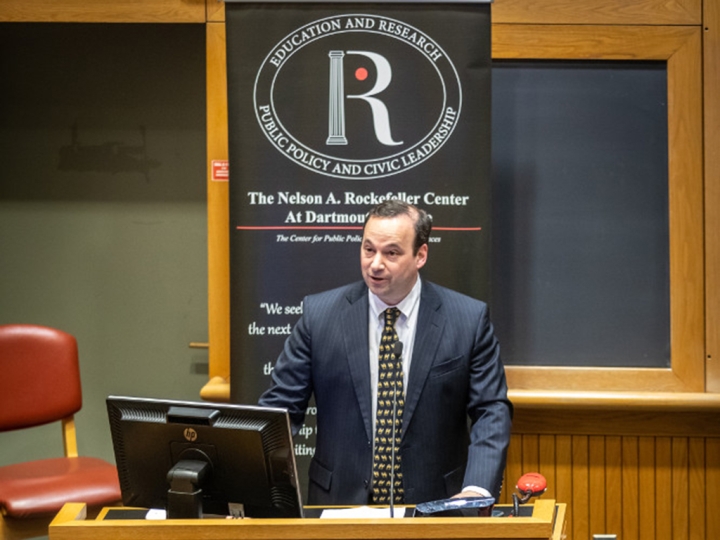 Where did the success of these programs take your thinking?

The next realization we made was that the public policy minor was upside down. Our public policy minor funding was being used in a more faculty-centric way, meaning spending the money on upper-level courses in which faculty teach courses reflecting their research expertise.

By the fall of 2006, we figured out that that the Policy Research Shop should be one of the methods classes, that we should have a great intro class, and to juice that up we created the First-Year Fellows Program, where we would link an intro public policy class, civic skills training, and internships through the Dartmouth alumni community working in government and nonprofit agencies in Washington, D.C.

That’s when the modern Rockefeller Center—what we have now—started to take shape. We had everything but one thing.

When I got here, the Rockefeller Leadership Fellows Program was our only formal leadership program. And that was really the main program that Sadhana got to sink her teeth into. She rebuilt the whole thing; took it down to the studs and made it in the image of what she thinks good leadership programs could be.

And students started to respond. It quickly attracted more students than it could accommodate. So, another question came up: “How do you do the good things that you do in the Rockefeller Leadership Fellows Program for more than two dozen students a year?”

That’s where the idea for the Management and Leadership Development Program (MLDP) came from. We decided to offer MLDP on campus, not internship-specific, just a general program for students to help build skills—networking, negotiating, project management, those sorts of things—that would be broadly useful to them as they sought to apply what they were learning across the disciplines at Dartmouth to good effect in the wider world.

Over a thousand students have done MLDP in the 10 years that it’s been going. The same curriculum is offered fall, winter, and spring. It perfectly fits in with anyone’s D-Plan for that reason. And eventually we added other leadership programs like the Dartmouth Leadership Attitudes and Behaviors Program, which has student facilitators, and the Rockefeller Global Leadership Program.

That was the last piece in creating the Rockefeller Center we have today. And all that really couldn’t have happened without raising what was a real game-changing philanthropic commitment from Glenda and Fritz Corrigan ’64 in 2009. Fritz was attracted to the center as one of the places on campus that was trying to be intentional about leadership development.

That’s how the Class of ’64 became such a significant supporter of the center?

The Class of ’64 had been supporting the center with internships, three a year, for quite some time. They liked their engagement with the Rockefeller Center. The first chair of my board of visitors was Ron Schram ’64, a former College trustee, and someone who, in his legal career, had noticed the rather damaging consequences of leadership failures. Members of the Class of 1964 provided funding to name the Policy Research Shop and to enhance our leadership programs as part of their 50th reunion gift.

Where do you hope the next director takes the Rockefeller Center?

What have we done? We’ve created an interesting community of students. Very bright, deeply engaged. Now I think the heaviest lifting to be done is to integrate advanced research opportunities led by Dartmouth faculty across the institution into the center’s programs.

I would expect—not to pre-judge—that what my successor might do is now re-introduce thematic programing built on a very solid foundation of student engagement around public policy and leadership, to take advantage of this scholarly community of students.

Do you have any tips on leadership for your successor?

Well, as we teach our students, leadership is basically about four things: networking, debating, negotiating, and mobilizing.

For me, I would have to say that networking has been, by far, the most important. My advice to anybody in any new situation is to figure out how to take advantage of those four opportunities, and the hint is that networking is the one that matters most of all. I’m a shy introvert, and even I recognize that.

Given that, was networking something you had to push yourself to do?

As a leader, you have to develop a manner of being in public with people. If you’re not a visible advocate for the most important things, then how will you attract the support that they need? You do what you judge is best to do, but you also acknowledge your strengths and weaknesses and work with them.

What else do I do? Well, I have Sadhana Hall. She’s the extrovert to my introvert. I have Ron Shaiko. Ron has remarkably high standards. We form this nucleus. Leadership lesson No. 1? If you have any weaknesses, one of the best ways to overcome them is to collaborate with people who don’t have those weaknesses and lean on them for support.

What’s next for you?

As of July 1, I’m no longer on the first floor of Rocky. I’m back in the Economics Department on the third floor, and I get something that I’ve been looking forward to for a while, which is just quiet. Running the Rockefeller Center is a life-affirming process, but it is not quiet. And it is out of quiet spaces and times that I think the best research ideas emerge.

I’ve been on the faculty for 25 years. If I’m blessed, maybe 25 more. What do I want to do with the second half of my career at Dartmouth? I only want to work on hard and interesting problems in economics. I want to continue to be engaged at the boundary between the public and private sector and what economics can tell us about that, and to continue to teach.