David Hooke ’84, a designer and builder of timber-frame homes, led the construction. 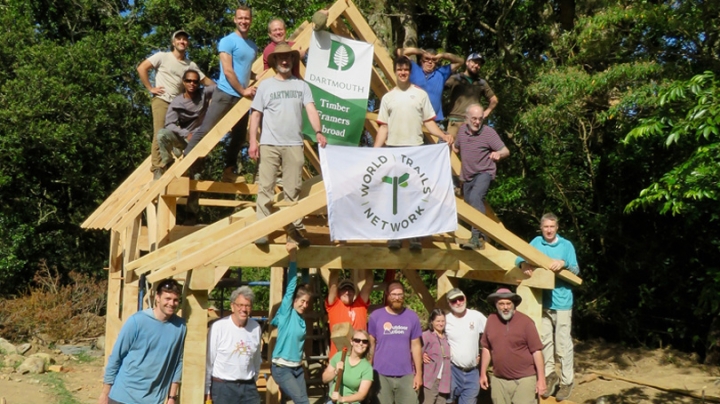 Read the full story by Molly McDonough in Alumni News.

Deep in the remote highlands of Costa Rica, at the end of a long-distance hiking trail, stands a rustic cabin, called a casita, partially built by a group of Dartmouth alumni, family, and friends. The construction crew was led by David Hooke ’84, a co-founder of TimberHomes Vermont, which has built post-and-beam structures throughout the Northeastern U.S.—including sections of the Moosilauke Ravine Lodge.

The work took place last March during an alumni trip to Costa Rica’s Sendero Pacific, a hiking trail that stretches from the Monteverde Cloud Forest to the Gulf of Nicoya on the Pacific coast. The casita, built with old tools and local wood, will eventually house researchers, workers, and an information center for visitors, giving ecotourism a boost in the rural community. The group collectively racked up 506 volunteer hours for the Call to Serve during their trip. Working day and night, they managed to raise the frame in a week.

One of the crew members was Arlo Frost ’78, who had previously worked with Hooke on the Class of 1978 Bunkhouse at Mount Moosilauke and had traveled to Costa Rica for a foreign study program as an undergraduate. About the casita, he says, “It was really special to know it will benefit the trail, as well as the community of San Luis.”